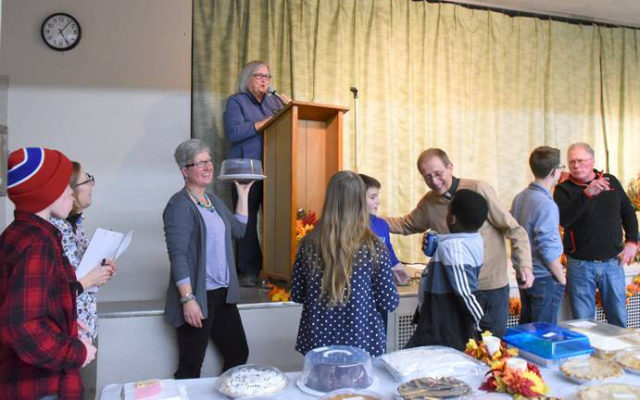 Contributed • November 29, 2019
Pies and ployes were the big draws at a fundraiser held on Saturday, November 24, in the hall beneath Holy Rosary Church in Caribou.

CARIBOU, Maine — Pies and ployes were the big draws at a fundraiser held on Saturday, November 24, in the hall beneath Holy Rosary Church in Caribou.

Proceeds will benefit H.O.P.E., the social action commission of the Parish of the Precious Blood. The parish serves Caribou, Presque Isle and surrounding towns.

Parishioners, community members, and Bishop Robert P. Deeley were treated to a dinner of hearty chicken stew and ployes and then had a chance to get a jump on their Thanksgiving preparations by bidding on homemade pies and other treats baked and donated by parishioners.

Around 40 pies were up for auction including apple, blueberry, chocolate cream, pecan, and pumpkin. Some pies, along with a peanut butter cake, went for as high as $40. Even Bishop  Deeley, who stopped by to support the cause during a visit to Aroostook County, got into the bidding action, as did Monsignor Andrew Dubois, vicar general of the diocese; Father David Raymond, pastor of the parish; and Father M. Arockia Natha Prabu, HGN, parochial vicar.

“Bidding on the pies was super fun,” said Theresa Bonner, the parish’s director of youth ministry, who was bidding for both her family and for friends. “It may have appeared to be a bidding war over a pie, but truly, it was an entertaining way to help raise funds for H.O.P.E.  H.O.P.E serves our community members in need, and all present were there for the cause.”

The mission of H.O.P.E., which stands for Helping Our People Eagerly, is to raise funds for people in need and to work collaboratively with social service agencies in Aroostook County.

“There is a wonderful collaboration among the different assistance agencies in the County,” said Martha Frank, business coordinator for the parish. “The goal is to make sure nobody gets left behind, and nobody falls through the cracks.”

More than $1500 was raised from the dinner and pie auction, and the money will be specifically designated for fuel assistance and emergency shelter. The parish partners with Catholic Charities Maine to provide the fuel assistance and with some local motels that have agreed to provide temporary lodging for people, while they seek more permanent arrangements.

With winter arriving early in the County, as it often does, there is already a need. The National Weather Service reports that Caribou has already gotten nearly 23 inches of snow, the ninth highest amount on record for November, with more snow in the forecast.

The chicken stew and ployes fundraiser is an annual tradition at the parish. This is the first year, however, that the pie auction was added. The parish says it likely won’t be the last.

“We thought the time was right, just before Thanksgiving. It’s amazing how many people don’t like to make pies or don’t know how to,” said Janet Beckwith, pastoral life coordinator. “It was a fun event. The bishop’s presence made it even more fun. Lots of young families showed up.”

Helping out at the fundraiser were members of the parish youth ministry group. The teens served the meals, delivered the pies to the winning bidders, and helped with cleanup. The evening also included a silent auction to raise money for youth ministry. That netted $660.

Following the dinner, the bishop joined the teens for Theology at Tim’s, a monthly youth ministry gathering held at Tim Hortons in Caribou.  Modeled after Theology on Tap for young adults, Theology at Tim’s gives the youths an opportunity to discuss their faith in a casual setting.

Submitted by the Communications Office of the Roman Catholic Diocese of Portland.

Halfway Home Pet Rescue in Caribou has partnered with the Houlton Humane Society shelter for a cat spay and neuter clinic on Saturday, May 30, and Sunday, May 31, in Houlton.
Campaign Corner END_OF_DOCUMENT_TOKEN_TO_BE_REPLACED