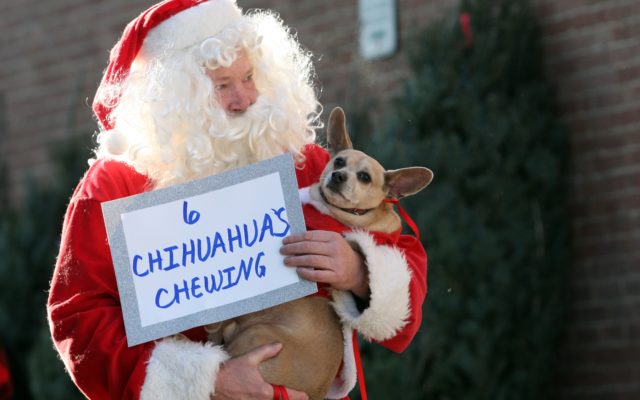 Joseph Cyr • December 9, 2019
Pups of all shapes, sizes and ages were on display Saturday in downtown Houlton as the Ark Animal Sanctuary conducted its annual “Twelve Dogs of Christmas” fundraiser.

HOULTON, Maine — Pups of all shapes, sizes and ages were on display Saturday in downtown Houlton as the Ark Animal Sanctuary conducted its annual “Twelve Dogs of Christmas” fundraiser. 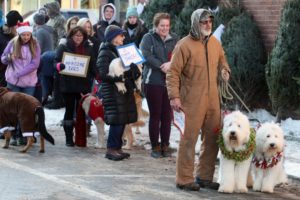 Also known as the “Miracle on Mechanic Street,” due to the fact that the Hollywood Pet Salon is located on the corner of Main and Mechanic streets, the yearly holiday gathering serves as a fundraiser for the Ark Animal Sanctuary.

A dog parade was held on Mechanic Street — which was closed off to traffic — at 10 a.m. with people able to parade their pooches to the slightly altered tune of  the “Twelve Dogs of Christmas,” including verses like “Five Golden Retrievers” and “A Poodle in a Dog House” in place of the traditional lyrics to the “Twelve Days of Christmas.”

According to the group’s Facebook page, the event helped raise $1,500 for Ark Animal Sanctuary through the sales of Christmas trees, wreaths, food items and a silent auction.

“Not only that, but every cat on the giving tree has been sponsored,” said Lorraine Monfils, executive director for the Ark Animal Sanctuary. “It was a wonderful day and we appreciate your support and generosity. For all the dogs that came out all dressed for Christmas, you did an amazing job. Animals helping animals — it doesn’t get any better than that.”

Many of you have been following Luke's story on our Facebook page. Luke came to the Ark last July with his sister Lydia at 8 weeks old. Both Luke and Lydia were in really bad shape with untreated upper respiratory infection.
Campaign Corner END_OF_DOCUMENT_TOKEN_TO_BE_REPLACED