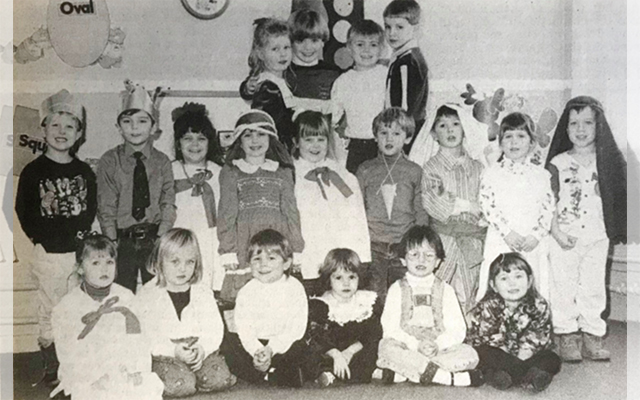 Leased store — Hamilton & Webber, dealers in stoves and tinware, have leased the J.E. Burnham store which they will occupy after January 1.

Billboard placed — Fox Bros. have recently placed beside their store, Water Street, a public billboard. The selectmen have prohibited people from placing notices on the Post Office corner and this billboard will prove a great convenience to the public.

Sold interest — Blaine Brackett, one of the proprietors of the Snell House barber shop, has sold his half interest to George Stevens, who has been employed for some time in the Thomas barber shop and assumed his ownership Saturday. The business will in the future be conducted by Harry Crafts and Mr. Stevens.

Celebrating anniversary — A surprise was given Mr. and Mrs. Horace Bither at their home last Saturday evening, in honor of their 20th anniversary. About 25 relatives and friends were present. They were presented with several pieces of hand-painted china.

Top honors for window display — The First National Store was awarded a first prize of a $25 war bond for their window display in the anti-inflation contest conducted here by the Office of Price Administration with the cooperation of the Chamber of Commerce, the Houlton Woman’s Club and the B.P.W. Club. The winner displayed a window of meatly labeled groceries showing  a comparison of prices between World War One and World War Two. The same groceries which cost $120.06 in 1918, can be bought now for $67.79. The first prize was offered by the Chamber of Commerce. The display was arranged by the store manager Miss Frances Lilley.

Attend 50th anniversary— Wilfred Donovan, president of the Aroostook County Farm Bureau attended the 50th anniversary of the Bureau in Washington from December 7 to 11. President Nixon was the guest speaker.

Christmas shopping tour — The Houlton Chapter of Jaycees is carrying the Christmas spirit from the meeting room to the community with several activities having been conducted or being planned for the Christmas season. The Jaycees will take some 30 children out on the town for a “Christmas shopping tour.” Each participating Jaycee will take two or three of the children into local stores and let them pick out Christmas presents. Then the children will go the Northland Hotel where their gifts will be wrapped and they will be visited by Santa Claus

Spirit of giving — Peoples Heritage Bank employees in Houlton each year sponsors a benefit basketball tournament to raise funds to purchase Christmas gifts for local organizations. This year funds were used to purchase gifts for the Battered Women’s/Children’s Shelter, the Community Living Association and the Salvation Army.

Gifts for kids — Cheryl Graham of Louisiana-Pacific of Houlton presented Terry Shaw from the Department of Human Services with gifts donated by L-P employees for 25 area foster children. Employees purchase, wrap and deliver gifts annually for foster children in the Houlton area.

Halfway Home Pet Rescue in Caribou has partnered with the Houlton Humane Society shelter for a cat spay and neuter clinic on Saturday, May 30, and Sunday, May 31, in Houlton.
Campaign Corner END_OF_DOCUMENT_TOKEN_TO_BE_REPLACED