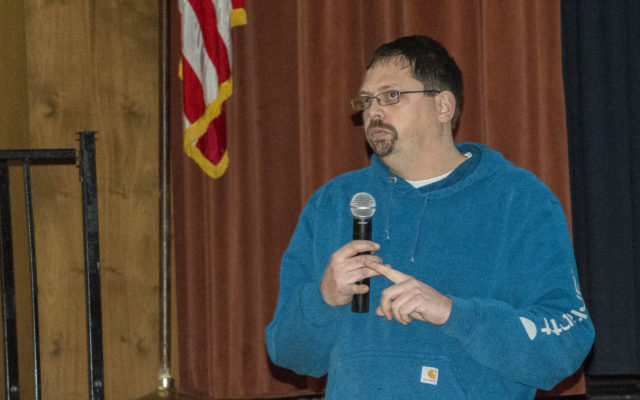 Limestone could pay more than $200,000 for new ambulance contract

Chris Bouchard • January 8, 2020
A few dozen people attended a Jan. 7 public hearing in the Limestone Community School auditorium to hear about Caribou’s offer for ambulance services and to discuss the town’s options.

LIMESTONE, Maine — A few dozen people attended a Jan. 7 public hearing in the Limestone Community School auditorium to hear about Caribou’s offer for ambulance services and to discuss the town’s options. Contracting with Caribou would increase the town’s annual ambulance expenses by $178,000.

For nearly a decade, Limestone had received EMS services through Crown Ambulance, but with the recent discontinuation of Crown’s 9-1-1 services, Limestone and several more County towns the service covered are looking at other options.

Limestone paid approximately $25,000 annually for ambulance services through its agreement with Crown. Caribou’s offer would cost the town $203,000 annually — a $178,000 increas

To help offset this cost, Limestone Interim Town Manager Vicki Page said that the Loring Development Authority has made a verbal commitment to cover half of these costs. As of Jan. 9, the LDA has not made any written commitment. If Loring agrees to cover half of the increased costs, Limestone taxpayers would see a $76,000 increase instead of $178,000.

Limestone is one of more than half a dozen communities discussing how to handle a significant price increase for fire and EMS services offered by the city of Caribou. Until recently, the city had charged communities $11.50 per capita. Now, the city is asking smaller surrounding towns to pay $100 per capita if they wish to continue utilizing the ambulance service.

In a letter to surrounding towns, Caribou City Manager Dennis Marker explained that Crown’s decision to discontinue services due to reimbursements being below operation costs has caused Caribou and other service providers to scrutinize their own solvency.

He said that while the city recognizes the need to reduce costs for smaller communities, continuing at the current reimbursement rates is not sustainable.

“We trimmed operational costs, have deferred capital needs where we could and helped get legislation passed to increase state reimbursements [for ambulance services],” he wrote. “Unfortunately, costs continue to escalate while the health care industry reimbursements do not keep pace.”

As a result, Marker said he and other officials found that it is not sustainable to continue providing a fire and ambulance service for the region using the current reimbursement system and rates of $11.50 per capita for outside communities.

The city is offering the towns three options and giving them until Jan. 31 to decide. The first option is a flat rate of $500 for each run to a community that makes a call. It would not include an annual fee, the billing of insurance companies, or paging in staff to cover outside runs, meaning potentially lengthy response times if Caribou’s Fire and Ambulance service is handling another call.

Caribou has agreed to offer this service to Limestone until Jan. 31.

The second option is an annual payment of $100 per person for contracted EMS services. Through this agreement, there would be no additional fees. Caribou would charge the patient for services rendered, and staff will be paged to cover outside runs, ensuring a faster response time.

The third option is similar to the second, except that it also includes fire services for a $125 annual payment per person. Limestone is not considering this option, as the town already has a fire department.

Residents at the meeting all reluctantly spoke in favor of the second option. While none were excited about the proposed price, all agreed that reliable ambulance service is a necessity.

Limestone resident Tom Albert said that option one is not an option because it may lead to situations where the ambulance is unable to immediately respond.

“I had a brother die in the middle of the road because the ambulance didn’t come for 45 minutes,” he said. “So I don’t know if that’s where you want to be with option one. I’d like to think that someone’s coming when I pick up the phone and ask for an ambulance.

“While we don’t like the price [of option two], it’s the only option we really have,” he said.

Selectman Chris Durepo, who led the meeting, said that if option two were chosen, the next step should be to work with county and state governments concerning a more affordable alternative.

“I think this is simply the beginning of the discussion, and not a permanent solution,” Durepo said.

Selectman Walt Elliott added that Caribou officials are also concerned about the situation and that they are discussing their options with lawmakers in Augusta.

“The reason they’ve marked it as $100 per capita is because in the past few years they’ve been running so far in the red, that their council has said they can’t continue to serve other communities at the [city’s] expense,” he said. This agreement would make surrounding communities responsible for the services they receive.

“They’re trying to recoup what they’ve been losing,” he said.

Some expressed concerns about Caribou’s ability to sustain services to so many surrounding towns.

Elliott said this may lead to a future where small, rural towns in The County begin working together through regionalization. Officials also said that Caribou’s description of the contract states that this may be a prelude to a district service through which numerous communities are served, adding that this would likely occur over the course of four or five years.

The town will hold a special town meeting at 6:30 p.m. Wednesday, Jan. 15, in the Limestone Community School Auditorium. Residents will be able to vote on moving forward with the contract, and also on establishing a community first responder service within the town.

Correction: An earlier version of this story misstated the increase of the town’s annual ambulance expenses under the proposed contract.