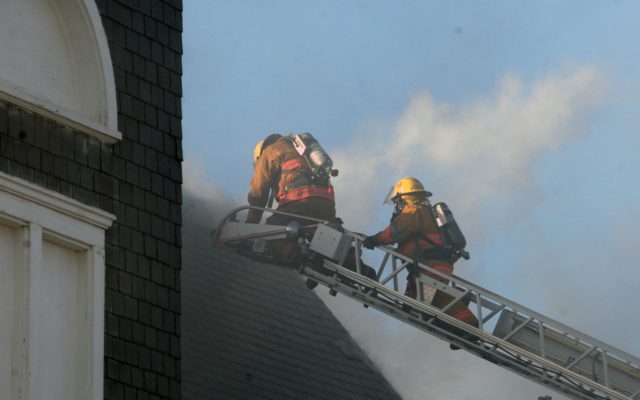 Joseph Cyr • January 9, 2020
Firefighters from four departments responded to a fire call Thursday afternoon when a report came that a computer had exploded on the second floor of Summit Academy and caused a fire.

HOULTON, Maine — Firefighters from four departments responded to a fire call Thursday afternoon when a report came in that a computer had exploded on the second floor of Summit Academy and caused a fire.

At the time the fire was reported — around 2:20 p.m. — the school’s approximately 30 students were getting ready to leave for the day. Students were evacuated, but much of the technology, including student laptops, had to be left behind.

Crews from Houlton, Hodgdon, Littleton and Monticello responded to the call to the school, located at the corner of Military and Kendall streets.

The building once served as the home of the Military Street Baptist Church.

There was heavy smoke, but the sprinkler system helped keep the flames to the second floor. Holes were cut into the slate roof to ventilate the smoke. The building suffered heavy water damage.

No injuries were reported.

It wasn’t clear how long the school would be closed as a result of the fire.

Maine is more than eight months into Medicaid expansion under the federal Affordable Care Act and trends around who is enrolling and where they live are starting to emerge, bucking some expectations and pointing out access challenges.
Pets END_OF_DOCUMENT_TOKEN_TO_BE_REPLACED