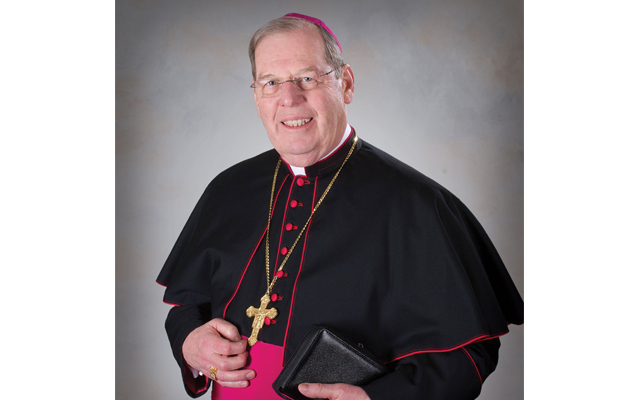 Contributed • January 10, 2020
The Roman Catholic Diocese of Portland, which covers the entire state of Maine, is taking steps in response to the current widespread cases of influenza by reinstituting a number of precautions during Masses and other celebrations.

PORTLAND, Maine — The Roman Catholic Diocese of Portland, which covers the entire state of Maine, is taking steps in response to the current widespread cases of influenza by reinstituting a number of precautions during Masses and other celebrations.

After reviewing reports from state health authorities, Bishop Robert P. Deeley is implementing the following directives for all parishes as of the weekend of Jan. 11-12.

Priests will announce that if parishioners are sick or already have any type of cold or flu-like symptoms, they are asked to stay home, both for their well-being and that of others. When individuals are ill, they are not bound by the Sunday Mass obligation. Encouraging people who are at risk to stay away from large church gatherings is an extra step intended to maintain their health.

The distribution of the shared consecrated wine for the faithful is suspended, with the exception of those who must receive from the cup due to medical reasons (i.e., Celiac disease).

The faithful will be urged, but not required, to receive Holy Communion in the hand rather than on the tongue. All ministers of Holy Communion are advised to distribute the consecrated hosts with care, being cautious not to touch the tongue or the hand of the communicant.

Breaking with custom, parishioners should not shake hands during the Sign of Peace and will be encouraged to offer a verbal greeting, smile, or bow of the head. Hospitality ministers should also not shake hands, but rather offer verbal greetings. They will be strongly encouraged to sanitize their hands prior to and after exercising their particular ministry as well. Parishioners should not hold hands during the Our Father.

Sponges, sometimes found in holy water fonts, should not be used.

Prayers of the Faithful will include prayers for those stricken with the flu or other serious illness, for those who care for the sick, and for the community at large.

These protocols will remain in effect until further notice and are similar to those established during other severe flu seasons.

Submitted by the Communications Office of the Roman Catholic Diocese of Portland.

Maine is more than eight months into Medicaid expansion under the federal Affordable Care Act and trends around who is enrolling and where they live are starting to emerge, bucking some expectations and pointing out access challenges.
Pets END_OF_DOCUMENT_TOKEN_TO_BE_REPLACED