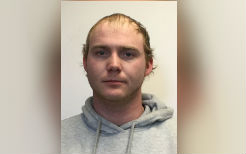 Seth Lockhart of Fort Fairfield is wanted on a charge of probation revocation. In a Facebook post on Sunday, Fort Fairfield police said Lockhart was actively avoiding attempts by officers to locate or contact him. A warrant is out for his arrest.

Lockhart, 24, is a registered sex offender previously convicted of sexually abusing a minor in March of last year. How he violated his probation related to that offense has not been disclosed.

Fort Fairfield Police Chief Shawn Newell said that it appears that Lochart had been “couch-surfing” while avoiding authorities. Newell did not think Lockhart had left Fort Fairfield.

“He’s definitely in the area,” Newell said. “We’ve been in contact with his family members, who are trying to reach out to him to encourage him to turn himself in.”

Shortly after the department made the post, comments appeared from residents denigrating Lockhart’s physical appearance, along with other generally negative messages.

While such comments are often posted on police Facebook pages in The County and elsewhere, less common is the department attempting to moderate the responses in the name of civility.

Newell did just that in a comment on the post, saying the department had not made the post to ridicule Lockhart, but to help locate him. He asked those who had made negative comments to remove them, and for the public to refrain from similar remarks.

“Everyone deserves to be treated fairly and with dignity, regardless of their pending charges or previous convictions,” Newell said.

Maine is more than eight months into Medicaid expansion under the federal Affordable Care Act and trends around who is enrolling and where they live are starting to emerge, bucking some expectations and pointing out access challenges.
Pets END_OF_DOCUMENT_TOKEN_TO_BE_REPLACED