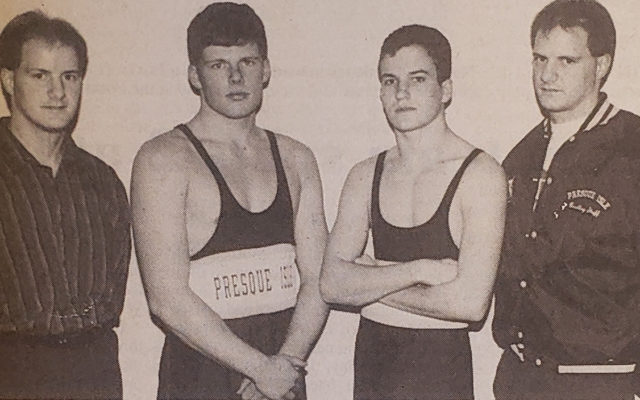 Bragdon awarded Purple Heart — Pfc. Gordon Bragdon, son of Mr. and Mrs. Ernest Bragdon of Presque Isle, was awarded the Purple Heart for wounds received in action against the Germans in the Italian war theater.

Clean-Up-Award — The continuous community betterment efforts of Presque Isle had merited an Honorable Mention in the 1969 National Clean-Up Contest in which the city competed with others of under 25,000 population from across the country. The contest, sponsored annually by the National Clean Up-Paint Up-Fix Up Bureau, the oldest and largest such competition in the United States. A member of the city’s delegation to the 1970 National Congress on Beautification in Washington, D.C., was presented the specially designed, framed certificate at an elaborate ceremony climaxing the three-day conference. The city’s scrapbook entry also was chosen to be placed on display during the entire length of the Feb. congress at the Statler Hilton Hotel.

Department head shift — A shift in department heads was announced by City Manager Dana Connors moving Kenneth Waddell to Incinerator Supervisor, and hiring Maxwell Buck as Highway Commissioner. Connors said that it was extremely important to find someone who would accept the great amount of responsibility that would be connected with the new cone incinerator that was being installed.

Professor selected for national education post — Sue F. Johnson, an English professor at the University of Maine at Presque Isle, had been appointed to an important post with the National Council of Teachers of English (NTCE). Johnson served as a member of the CEE Commission on the Preparation and Professional Development of English Language Arts Teachers.

Easton accepted Crown Ambulance increase — A proposed 2.7 percent rate increase for ambulance service being requested by Crown Ambulance was approved by the Easton Board of Selectmen. The board also conducted its first budget workshop for the 1995 fiscal year. Easton Town Manager Jackie Bradley said the board unanimously voted to continue its agreement with The Aroostook Medical Center for ambulance service.

For all it does to refresh us, burn energy and keep us sharp, we all need playtime, dogs and cats included. Sharing playtime with pets has the added benefit of strengthening the bond between us, so we better understand one another.
Campaign Corner END_OF_DOCUMENT_TOKEN_TO_BE_REPLACED