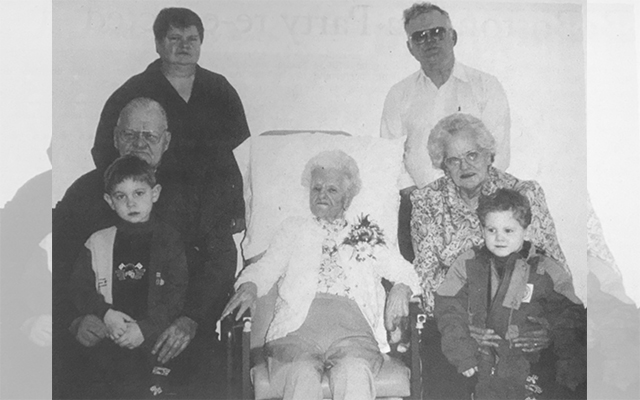 Lanette Virtanen • February 5, 2020
100 Years Ago - Feb. 11, 1920      Returned home — Harold L. Cates has returned home from a two weeks trip to Boston and New York during which time he attended a get-together meeting of the Willard Storage Battery Company.

Returned home — Harold L. Cates has returned home from a two weeks trip to Boston and New York during which time he attended a get-together meeting of the Willard Storage Battery Company.

Conveyance of interest — A real estate conveyance of interest to Houlton people took place last week when the undivided half of the Frisbie block in Market Square, which was owned by the heirs of the late H. T. Frisbie, was transferred to the Putnam Hardware Co. and Lee W. Ervin. The other half of the property was purchased a few years ago by Geo. W. Richards, who bought it from John S. Weiler, having purchased it from the Cira Frisbie estate.

Accepts position — Miss Jean McLaughlin, who has been employed at the Ricker Promotional Campaign office, has accepted a position as cashier at J.C. Penney Co.

Buying trip — Mrs. Lawrence Hutchinson returned Monday from the New York markets where she spent ten days in the interest of the Harry B. Green’s Women’s Wear Shop.

Retirement party — Mrs. Kathleen West was the guest of honor at a retirement party at Parkview Terrace given by her fellow Telephone Company employees. Mrs. West has been an operator in the Houlton office of the Telephone Company for 20 years. There to celebrate were; Miss Catherine O’Donnell of Bangor, staff instructor; William D. Stevens of Bangor, traffic manager;  Miss Glenna Sperrey, acting chief operator in Houlton; and Mrs. Ronald Craigs of Houlton, hostess for the party.

Canusa drawing — At the Grand opening celebration of Canusa, Inc., Truck stop and Borderview Restaurant, a drawing was held to ascertain 13 prize winners. Twelve transistor radios were awarded along with two Goodrich Tires, a Coleman lantern, a Polaroid camera and a tricycle. Officiating at the drawing were Town Manager Arthur Curtis, Miss Sue Tilley, staff secretary of the Town Office and Robert Hazelwood of Canusa, Inc.

Chamber makes award — Bob Hall of Houlton was named ‘Chamber Citizen of the Year’ at the group’s annual meeting. Hall received the presentation from board member Lloyd Chase.

Handing over the gavel — Marguerite Lowler, first past president of the Greater Houlton Chamber of Commerce, hands the president’s gavel to Bob Reece, chamber president for 1995, during the chamber’s annual meeting.

For all it does to refresh us, burn energy and keep us sharp, we all need playtime, dogs and cats included. Sharing playtime with pets has the added benefit of strengthening the bond between us, so we better understand one another.
Campaign Corner END_OF_DOCUMENT_TOKEN_TO_BE_REPLACED