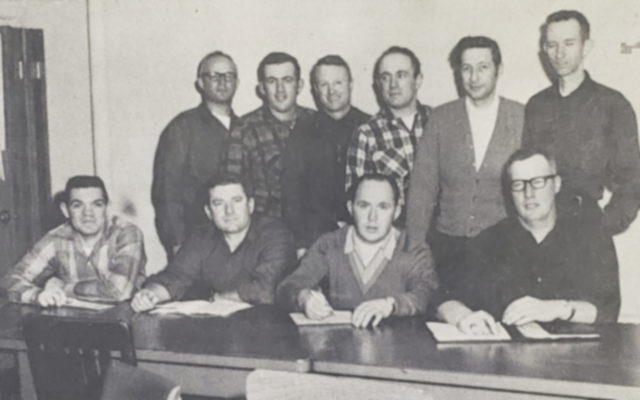 Yvonne Tardie • February 5, 2020
75 Years Ago -  Feb. 8, 1945 New youth organization formed in Presque Isle -- The local council of the Knights of Columbus, under the direction of E. A. Gagnon, Grand Knight and State Committeeman, sponsored the Father James A. Hayes Circle of the Columbian Squires.

New youth organization formed in Presque Isle — The local council of the Knights of Columbus, under the direction of E. A. Gagnon, Grand Knight and State Committeeman, sponsored the Father James A. Hayes Circle of the Columbian Squires.

Presque Isle woman honored — Miss Sue V. Thompson was appointed Aroostook County representative of The Woman’s Acting Committee for Victory and Peace according to a communication received from Mrs. Norman De-R-Whitehouse, National chairman of New York City. Miss Thompson was the first woman in the County to be thus honored.

UMPI camp winners named — The 1994 North Star basketball camp was held at the University of Maine at Presque Isle, with more than 70 players in grades 3-8 taking part. Winning awards were, in the morning session for grades 3-5, Nick Casavant, Miranda Condon, Ryan Graves and Billi Blanchard of Presque Isle; Kristi Brooker of Island Falls and Ryan O’Neal of Limestone. For grades 6-8, coming away with trophies were Andy Rasche, Arika Rowbotham, Billie Hayward and Brianna Blanchard of Presque Isle; Shane Bradstreet of Bridgewater and Edward Barnes of Easton. The director of the camp was Karl Henrikson, coach of the UMPI men’s basketball team.

First Citizens Bank set new performance records in 1994 — David I. Dorsey, president and CEO of First Citizens Bank, announced Jan. 23, that the bank established new performance records during 1994, including increases of 25 percent or more in net income, total assets, loans and deposits. The bank posted net income of $572,788 for the year, an increase of 25.2 percent over 1993. The bank’s growth was fueled by a significant increase in its loan portfolio. Total loans increased by 33 percent or $15.4 million during the year.

Only one member of Maine’s congressional delegation had come out in favor of impeaching President Donald Trump ahead of House Speaker Nancy Pelosi’s Tuesday announcement that the Democratic-led House of Representatives would begin an impeachment inquiry.
Pets END_OF_DOCUMENT_TOKEN_TO_BE_REPLACED

We think a cat can make for the best pet in the world. To truly love a cat, you must learn to accept them for what they are -- unpredictable and quirky, which is something unique and unlike any other pet.
Campaign Corner END_OF_DOCUMENT_TOKEN_TO_BE_REPLACED