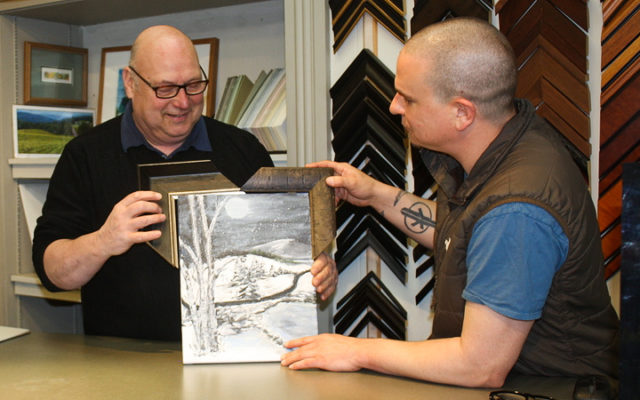 PRESQUE ISLE, Maine — A local art establishment’s new owner thinks the time is ripe for a renewed appreciation of vintage treasures and plans to add antique clock repair and other offerings to the business’ services.

Houlton-native James Carroll will become the new owner of Morning Star Art & Framing, located on Main Street in Presque Isle, on March 1. He already has many goals for maintaining relationships with longtime customers and inspiring the next generation of local artists.

Carroll will assume his new role when co-owners and founders Brian Brissette and Jane Caulfield, who have been married for 40 years, retire. The couple have decided to transition themselves away from the business in order to spend more time traveling. 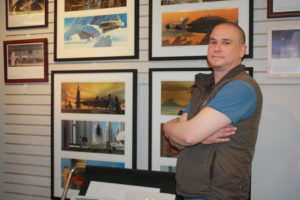 James Carroll stands in front of original Star Wars concept art that he has brought to Morning Star Art & Framing from his original collection. Carroll will officially become the new owner of Morning Star on March 1 after owners Brian Brissette and Jane Caulfield retire. (Melissa Lizotte | The Star-Herald)

When they first opened Morning Star in 2005, Brissette and Caulfield envisioned a unique business that offered custom framing of art prints and sold work from Aroostook County artists as well as made-in-Maine gift items. Fifteen years later, Brissette thinks that he and his wife have been able to create a “welcoming space” for artists and art enthusiasts while supporting the growth of small businesses on Main Street.

“It has always been rewarding to call up an artist to tell them that we’ve sold all their work and ask if they have more to share,” Brissette said. “When you support local artists, they then have more money to spend at local businesses.”

Over the years Brissette and Caulfield have witnessed the growth of the local arts scene in Presque Isle, as more galleries and art-based nonprofits and businesses such as The Common Gallery, Wintergreen Arts Center and Glass With Class came to the downtown area and became part of the First Friday Downtown Art Walks.

Now Carroll hopes to build upon Morning Star’s connections with established local artists and the services that the store offers. In addition to art framing and sales, Carroll is selling and offering repairs for antique clocks and pocket watches and plans to showcase artists who specialize in hand-carved forms of art such as antlers, woodwork and pottery.

“I think we’re at the beginning of a time when people will start looking back and appreciate the older trades and artwork more,” Carroll said.

Carroll has worked in for various local companies over the years, including factories, restaurants and programs for at-risk youth. Though he is not an artist, he said he has always been appreciative of great art. He wants to use his position as store owner to sell a wider variety of artwork that can attract both younger and older generations. 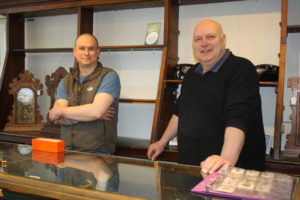 Recently Carroll brought to Morning Star original prints of Star Wars concept art that have been part of his personal collection for many years. He also is selling antique prints of tobacco and alcohol advertisements, science journals and even a print of a Time magazine cover featuring a photograph of the first atomic bomb falling from the sky over Hiroshima.

Carroll is also working to renovate a small space in Morning Star that once was a bank vault. The building Morning Star occupies was built in 1877 and housed Merchants Trust and Bank during the early 20th century. Carroll is keeping the original architecture of the vault and transforming the space into a small gallery, with the tin perfecoat walls painted to resemble the original copper.

The gallery will become a place for local artists to showcase their work during First Friday and other special events.

“I want to emphasize that the artists’ work are treasures and are precious like gold,” said Carroll, referring to the bright, gold-like color of the walls.

With all of Carroll’s new ideas, Brissette said he feels confident that he and Caulfield will leave Morning Star in good hands.

“Jim brings a new energy to what we’ve created, which is what I think the shop needs,” Brissette said. “Jane and I would like to thank all the people who have come into the store for the last 15 years.”

Only one member of Maine’s congressional delegation had come out in favor of impeaching President Donald Trump ahead of House Speaker Nancy Pelosi’s Tuesday announcement that the Democratic-led House of Representatives would begin an impeachment inquiry.
Pets END_OF_DOCUMENT_TOKEN_TO_BE_REPLACED

Last week, we received a phone call about a cat that was in desperate need of help. The young lady said she found a cat that was very skinny and crying and that there was blood in the snow.
Campaign Corner END_OF_DOCUMENT_TOKEN_TO_BE_REPLACED