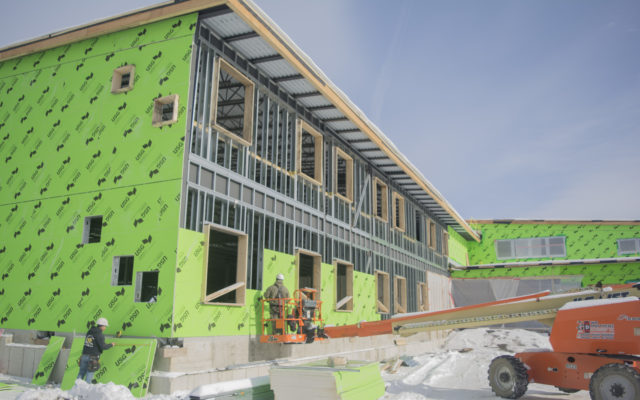 Chris Bouchard • February 7, 2020
With the pre-k through eighth grade Caribou Community School only months away from completion, officials are hard at work determining how the facility will best fit the needs of modern students.

CARIBOU, Maine — With the pre-k through eighth grade Caribou Community School only months away from completion, officials are hard at work determining how the facility will best fit the needs of modern students.

Caron then reported back during a Feb. 5 meeting, providing the RSU 39 Board of Directors with an in-depth presentation on how the new school could be tailored to fit student needs.

Caron first outlined the current status of the pre-k through eight schools in Caribou, which combined house 729 students and 63 teachers in the two schools. All teachers hold bachelor’s degrees at least, while 27 have master’s degrees. Nearly 90 percent of the teachers have more than five years of classroom experience.

He also discussed the need to improve student Maine Education Assessment test scores. The three-year average for all RSU 39 students shows that they are 8 percent below the state average in math and 13 percent less proficient in English language arts and literacy than the state average.

Caron said that visiting other schools provided insight into how student performance, and the learning environment in general, could be improved.

The principal first discussed how Trailblazer Elementary School, which holds k through five  students, emphasizes the use of “pods” — a building set up to group grades k through two together in one area and three through five in another.

The school also emphasizes student choice, with segments of the day dedicated to inquiry-based, student-directed learning, along with data-driven work in professional learning communities led by expert teachers.

Chipeta Elementary, also a k through five school, emphasized that recess is critical to learning as well as student health. As a result, recess was never taken away as a consequence of poor student behavior. The school’s principal visits all classrooms for five minutes daily, and the library features a self-checkout system that fosters trust, respect and responsibility from students.

Sabin Middle School, which includes grades six through eight, did not allow the use of any cell phones.

RSU 39 Superintendent Tim Doak said research shows that the constant use of cell phones has the potential to cause mental health problems.

“Every time you get a text or email message, you start thinking about it, and it leaves less opportunity for imagination,” Doak said. “When I was a kid we had to make up games to play outside. But now kids are so consumed with this and it happens to us as parents too. If you’re driving and get a text from your son or daughter, it consumes your mind.”

He said students who own cell phones could be getting texts at 2:30 a.m. in their bedrooms, whereas in the past any late calls would be coming through a landline that a parent would screen or pick up first.

“I have to commend [Sabin Middle School] for giving students six or seven hours to be free and use their imaginations,” Doak said.

Summarizing takeaways from the trip, Caron said the other schools have inspired Caribou to create “neighborhoods” in wings of the new building similar to the pod layout of Trailblazer Elementary, allowing students and teachers of multiple grade levels to work together and also easing the transition process from one grade to the next.

He said he would like to emphasize creating working relationships with neighboring organizations and businesses to offer unique learning opportunities. Caron also encouraged stronger marketing of the school to outside communities.

Keaton thanked the board for allowing her to take the trip to Colorado, and said that while Caribou will face unique challenges — such as limited community relationships in a rural area and budgetary issues — she is looking forward to the new school impressing state officials.

She added that additional staffing could improve the quality of education in the new school as well as student behavior, engagement and test scores.

“I think we have to take that all in consideration and know that we have some hard work ahead,” she said.

The board later approved the school calendar for the 2020-21 year, which will allow for extra time for moving materials into the new building. June 9 of the 2019-20 year will be dedicated to packing up materials in Caribou Middle School and Teague Park Elementary School, both of which will be demolished after the new school is built.

The Caribou Community School is scheduled for completion in August, with the first student day set for Thursday, Sept. 10.

On Thursday, Rep. Harold “Trey” Stewart III, R-Presque Isle, announced he will run for a state Senate seat in the 2020 legislative election -- an important change for one of the most powerful representatives in the Maine House.
Pets END_OF_DOCUMENT_TOKEN_TO_BE_REPLACED