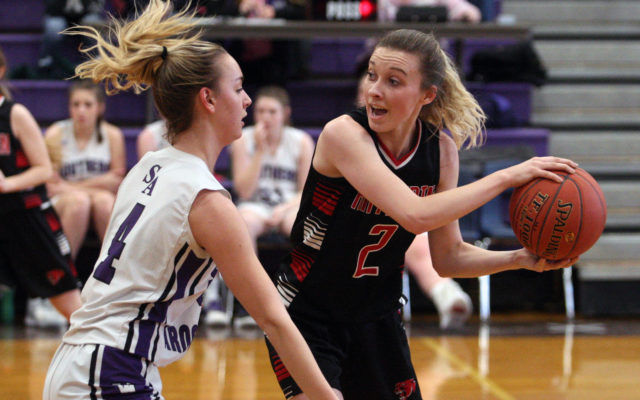 Joseph Cyr • February 10, 2020
Seven of the 10 squads in the Houlton Pioneer Times’ coverage area have qualified for the playoffs this year.

HOULTON, Maine — The regular season is now a fond memory for local high school basketball squads. But for several teams there are more games to be played.

Seven of the 10 squads in the Houlton Pioneer Times’ coverage area have qualified for the playoffs this year. The Maine Principals’ Association basketball tournament begins Tuesday, Feb. 11, with preliminary round games

Both Houlton squads finished as the No. 5 seed in Class B North and will host prelim games this week with the hope of advancing to Bangor.

The Hodgdon girls have experienced one of their best seasons in recent memory with a 13-5 record under coach Wendell Harvey. The Hawks enter the Class C North tourney as the ninth seed, just missing out on hosting a prelim game.

In Class D North, the Southern Aroostook boys and girls, Katahdin girls and Greater Houlton Christian Academy boys are all playoff bound. The Southern Aroostook girls finished 18-0 and are the top seed in the team’s region. The Warrior boys had a strong season with first-year coach Brett Russell, finishing 13-5 and fifth in their division.

The Cougar girls came on strong as the season progressed for coach Shawn McAvoy, finishing 13-5 and third in its division. Although in his first-year as the Cougars head coach, McAvoy served as an assistant to the program for many years and is also the varsity girls soccer coach. 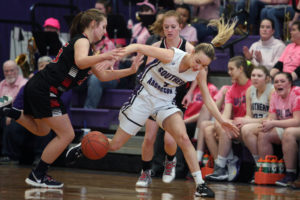 Greater Houlton Christian Academy is heading to the playoffs for the second straight year. The Eagles, with second-year coach Matt Day, finished 8-10 on the year and are ranked ninth in its division.

The following is a preview on the upcoming playoff games.

No. 5 Houlton girls (11-7) host No. 12 Foxcroft Academy (6-12) — The Shires will be in the familiar confines of Alumni Gymnasium Tuesday evening for its Class B North prelim game against the visiting Ponies of Dover-Foxcroft.

In his 16 seasons with the club, coach Shawn Graham’s Shires have qualified for tournament play in all 16 seasons, with trips to Bangor in 13 of the last 15 years. The Shires played Foxcroft Academy once this season, a 51-46 road victory on Jan. 4 in what coach Graham described as a tight game throughout.

“They are a very respectful opponent that played an extremely tough schedule on the regular season,” Graham said. “[They are] pretty much a guard-oriented team with quality shooters.”

The Ponies have four players — Kaya Cook, Annie Raynes, Ainsely Ade and Megan Spooner — who each average about eight to 10 points per game.

“We’ve been busy fine tuning a few things in particular this past week — defensive rotations, boxing out off free throws, tweaking the offense a bit, hammering press break situations and lots of shooting,” Graham said. “They are very similar to us in terms of size, guard play, quickness and offensive balance.”

No. 5 Houlton boys (13-5) host No. 12 Old Town (9-9) — The Houlton boys will host the visiting Coyotes 6 p.m. Wednesday in a Class B North prelim game. For a time, it looked like the Shires would face either Presque Isle or Belfast in the prelims, but Old Town seized the 12th and final playoff spot Saturday with a 39-30 upset win over Orono (7-11 and 10th in the region).

Houlton finished as the Class C North regional champs last season and several of the players from that squad are on this year’s team looking to get back to a state championship, this time in Class B.

Keagan Gentle, a 6-foot, 2-inch senior guard, has been the team’s catalyst all season and scored the 1,000th point of his career earlier in the year. His cousin, Jaron Gentle (a 5-8 senior guard), has also come on strong in recent games and could be a major factor for Houlton moving forward. The team also has good size with senior Cam Callnan (6-4 center) and Drew Foley (6-3 forward).

No. 9 Hodgdon girls (13-5) at No. 8 Central (14-4) — The Hodgdon girls team finds itself facing an unfamiliar foe as it takes on Central of East Corinth 6 p.m. Tuesday in the preliminary round. The two teams did not meet during the regular season.

“Central is a very good team,” coach Harvey said. “Their only losses came to Stearns and Dexter. We have no common opponents during the regular season. I have seen them twice and they like to mix up their defenses and press. They have a very good post player in Emily Cohen [a 5-foot, 10-inch senior captain] and a good guard in Abigail Allen [5-6 senior captain.] Their other players are solid and know how to play their roles.”

Harvey said the Hawks will need to rebound and make their shots if they want to pull off the upset.

“We are going to have to play very well and take care of the basketball to win,” he said. “We are working hard in practice and looking forward to the challenge and the opportunity to get to Bangor.” 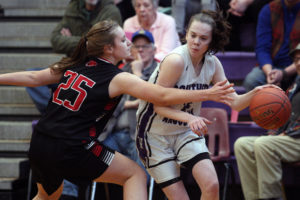 Southern Aroostook hits the court at 3:30 p.m. Monday in the Class D North quarterfinals against either No. 8 Ashland or No. 9 Jonesport-Beals.

“It has been a good season for us so far, with a lot of different kids stepping up for sure,” Urquhart said. “This team is very hungry, because we have a lot of kids who haven’t played big roles for us in the past.”

Southern Aroostook did not face Jonesport-Beals during the regular season, but did beat Ashland twice — 82-34 on the road Dec. 19 and 61-7 at home Jan. 3.

“To keep the kids’ focus, it is sometimes easier to play someone you haven’t faced before,” he said.

“I am very proud of the girls,” coach McAovy said. “I am kind of nervous, because it is kind of hard to beat the same team three times. We also struggled with Washburn early in both games. The bigger court, who knows, things can happen.”

McAvoy said his squad has to play better defensively, using its quickness to create turnovers. The team also needs its starters to stay out of foul trouble, so that the best players are on the court when it matters most.

The Eagles will lean on its veteran seniors — Parker Brewer (a 6-3 center), Will Austin (6-2, forward) and Ethan Grant (5-9, forward). Brewer has the ability to dominate inside the paint, while Austin has shown exceptional shooting prowess from behind the 3-point arc in games over the past two seasons. Grant is a gritty defender who is not afraid to slash to the hoop. Austin Winslow (5-11 junior guard) and Joel Carmichael (6-1 junior forward) could also be poised for a big game.