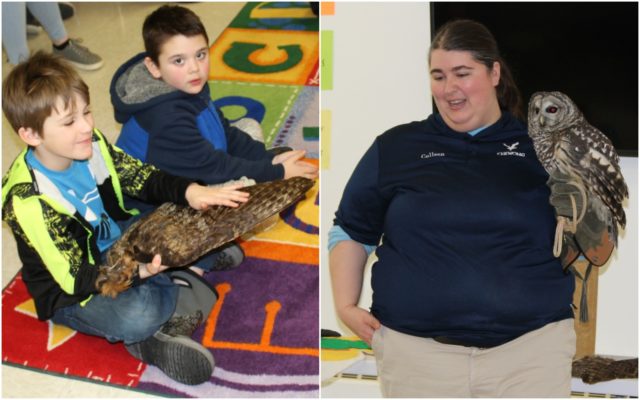 HOULTON, Maine — The Putnam Trust, which provides funds for a variety of programs in the community, funded a grant proposed by second-grade teacher Lauren Fitzpatrick that brought a number of owls to the school Feb. 12.

Colleen Moureaux was the presenter and brought three live owls for students to see along with other items pertaining to owls. This presentation introduced students to the habitats and special features of the birds.

The owls brought to the school included a great horned owl, a barred owl and an Eastern screech owl. Students learned that the owls are active at night and have specially designed eyes, ears, claws and wings that help them be experts in capturing their prey.

These creatures have their best vision at night. Their eyes are bigger than most animals, allowing every bit of light to enter. Their eyes are also fixed in their sockets which limits their movement and requires their neck to rotate more than 180 degrees.

The birds can look behind themselves, but only see things in black and white. Their ears, which are within their skull and at different levels, gather sound waves with the help of the arrangement of feathers on their facial disc. The sound waves get directed to the eardrums within the owl’s head. This feature helps them to hunt.

There are four claws — called talons — on each foot that are very sharp and curved. The owl can spread the talons far apart to better grab their next meal. The feathers on their legs protect them from being bitten by the creature they have just latched on to.

After capturing their meal they fly back to their roost to eat. They usually swallow their prey whole. The owl’s digestive juices cannot break down the fur, feathers or bone of the animal it swallows, so those parts are regurgitated through the mouth. These clumps are called pellets and are useful in determining the owl’s diet and the available food source of the region.

Barn owls chiefly feed on moles, rats, shrews and birds. After mating, the owls lay a clutch of eggs in two-day intervals, to alleviate the pressure of feedings once they hatch. It takes 31 days to hatch and after three weeks the babies can swallow prey whole. They practice flying short distances after nine weeks and soon leave the nest to live on their own. Some owls live up to 20 years, but many die young due to harsh weather or a shortage of food.

Student Charlotte Estabrook was excited to talk about touching three things on the display table. They included an owl skull, a claw and an owling.

Gavin Bell said, “It was neat how the feathers grew on the owl and how the head turned so far around.”

This program seemed to leave quite an impression on the students and they shared the experience later in the day with their parents at home. Many said it was the best program of the year.

A few weeks prior to the presentation, students were able to dissect owl pellets in their classrooms to discover many interesting facts about the owl’s diet.

The original Camp Chewonki for boys was founded in 1915 on the shores of Lake Champlain in New York by Clarence Allen. In 1918 he moved this operation to a 400-acre peninsula on Montsweag Bay in Wiscasset.

In 1962, a loyal camp alumni formed a non-profit to buy the camp. After Allen’s retirement in 1965, Tim Ellis was hired to succeed him and the programs grew into a full-time year round educational institution.

Their mission is, “to inspire transformative growth, teach appreciation and stewardship of the natural world. They challenge people to build thriving sustainable communities throughout their lives.”

Visit chewonki.org to learn more about other programs they provide.

Only one member of Maine’s congressional delegation had come out in favor of impeaching President Donald Trump ahead of House Speaker Nancy Pelosi’s Tuesday announcement that the Democratic-led House of Representatives would begin an impeachment inquiry.
Pets END_OF_DOCUMENT_TOKEN_TO_BE_REPLACED

Last week, we received a phone call about a cat that was in desperate need of help. The young lady said she found a cat that was very skinny and crying and that there was blood in the snow.
Campaign Corner END_OF_DOCUMENT_TOKEN_TO_BE_REPLACED