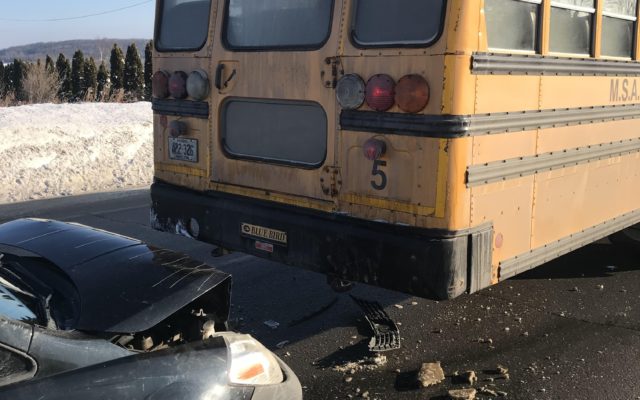 David Marino Jr. • February 13, 2020
An SAD 32 school bus was involved in a crash in Mapleton on Wednesday, resulting in minor damage to the bus and the “total loss” of another vehicle.

MAPLETON, Maine — An SAD 32 school bus was involved in a crash in Mapleton on Wednesday, resulting in minor damage to the bus and the “total loss” of another vehicle, the Aroostook County Sheriff’s Office said Thursday.

There were no children on board the bus when the crash occurred, Aroostook County Sheriff Shawn Gillen said. Melinda Michaud of Presque Isle struck the rear of the school bus after being temporarily blinded by the sun. Michaud and her four4-year-old child were not injured.

The office said that at 7:57 a.m. on Wednesday, Michael Truman of Ashland was eastbound on Main Street in Mapleton in an SAD 32 school bus. Truman had halted in a roadway, as a school bus traveling in the opposite direction stopped to pick up a child.

Michaud was driving behind Truman in a 2010 Nissan when authorities said she was blinded by the sun as she crested a hill. As Michaud put her sun visor down in response, she did not notice that the school bus in front of her had come to a stop.

Michaud was unable to brake in time to avoid a collision and her vehicle collided with the rear of the school bus.

Neither Michaud, nor her daughter, nor the driver of the school bus suffered injuries. The sheriff’s office said both drivers were wearing seatbelts and the 4-year-old was adequately secured in a child safety seat at the time of the crash.

Authorities described Michaud’s vehicle as a “total loss.” It was towed from the scene. The SAD 32 school bus received minor damage in the rear.

I was mentioning to our board of directors this past week that I got a quarterly report from a large online retailer who will donate a portion of my purchases to a charity I select.
Campaign Corner END_OF_DOCUMENT_TOKEN_TO_BE_REPLACED