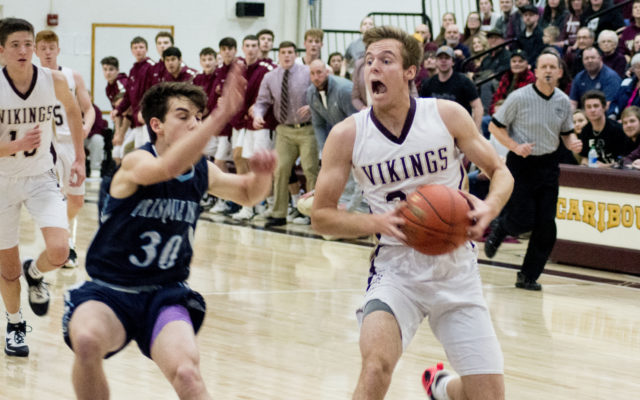 Chris Bouchard • February 14, 2020
After bringing home Caribou’s first basketball state championship in 50 years last season, the Vikings were clearly the team everyone was looking to beat this year.

CARIBOU, Maine — After bringing home Caribou’s first basketball state championship in 50 years last season, the Vikings were clearly the team everyone was looking to beat this year.

But the Vikings, and head coach Kyle Corrigan, are not quite ready to relinquish that title.

The Caribou Vikings recently finished its regular season as the top team in the Class B North division and are looking to defend its state title in the postseason. Caribou boasts a 17-1 record heading into the tourney and in the preseason, coach Corrigan was hopeful his squad could average 70 points per game. The Vikings achieved that goal and then some as the squad averaged 72.5 points per game this season.

With six seniors on the roster, there is plenty of veteran leadership with the team this year as many of the players had key roles in last year’s title run. 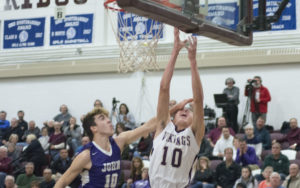 Corrigan said the squad was also looking to allow an average of 50 points from its opponents and nearly met that goal. The Vikings allowed 52.1 points to the opposition.

The team’s five starters also averaged an impressive amount of points per game, with senior Parker Deprey averaging 22.2 points per game, 10.2 rebounds and 3.6 assists. His field goal percentage is 62.7.

Senior Alex Bouchard averaged 11.6 points and 3.9 assists and coach Corrigan said he has been very efficient offensively, shooting 58 percent from two point range and 50 percent from the three point range.

Senior Isaac Marker averaged 10.3 points per game and Corrigan said he has a 35 percent average for three point shots.

Corrigan added junior Ethan Holdsworth has also progressed significantly throughout the season, averaging 5.7 points per game, but 10.5 points over the last six games while shooting 65 percent from the two point range.

The coach said while he is incredibly proud of the team for its hard work, the team is focusing all of its efforts on the postseason.

“Our guys understand that the regular season is over and our record is now 0-0,” he said.

Although the Vikings are the defending Class B state champs, Corrigan said he doesn’t feel there is any pressure to repeat last year’s success. 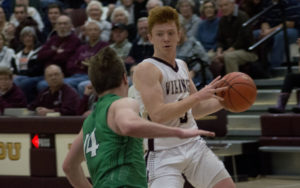 The Caribou Vikings took on the Fort Kent Warriors during a Dec. 10 game at Caribou High School. Alex Bouchard, right, of the Vikings attempts to dribble past a Fort Kent defender. (Chris Bouchard | Aroostook Republican)

“The community is obviously very supportive of our team, but we need to make sure we are eliminating any outside noise,” he said. “Our main focus for our team is making sure that we’re enjoying basketball every single day and preparing for the next game to be the best of our ability.”

Looking toward the playoffs, Corrigan said the team is working to clean up a few aspects of its defensive game while preparing for Bangor.

“I told the guys the other day that this week we need to get a little more mentally tough for certain situations and scenarios,” he said. We are going to have to have extra focus during practice and we’re going to stress executing in half court.”

Corrigan said last week that the team has a few lingering injuries that they are managing before the first playoff game, adding that it is nothing overly serious and should be healed with rest.

“The guys have been very good about communicating to me when there is an issue,” he said. “County Physical Therapy has done a great job with helping our athletes recover.”

Only one member of Maine’s congressional delegation had come out in favor of impeaching President Donald Trump ahead of House Speaker Nancy Pelosi’s Tuesday announcement that the Democratic-led House of Representatives would begin an impeachment inquiry.
Pets END_OF_DOCUMENT_TOKEN_TO_BE_REPLACED

Last week, we received a phone call about a cat that was in desperate need of help. The young lady said she found a cat that was very skinny and crying and that there was blood in the snow.
Campaign Corner END_OF_DOCUMENT_TOKEN_TO_BE_REPLACED