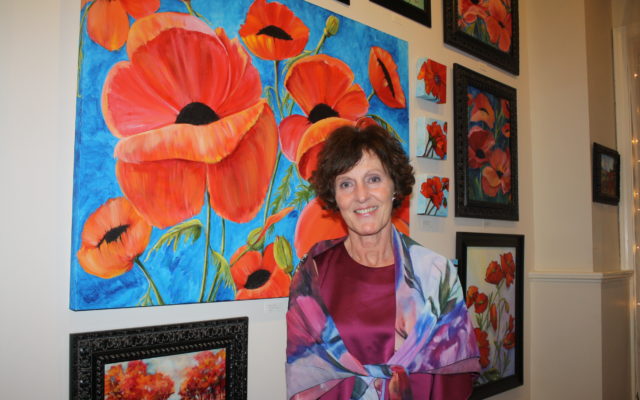 Artist reflects on personal growth, looks ahead to future at Wintergreen show

Melissa Lizotte • February 18, 2020
When Filomena Irving of Washburn first began pursuing her artistic talents five years ago, she never could have imagined she would become a sought after artist throughout the state.

PRESQUE ISLE, Maine — When Filomena Irving of Washburn first began pursuing her artistic talents five years ago, she never could have imagined she would become a sought after artist throughout the state.

Irving became an artist full time after retiring from teaching middle school science in Washburn several years ago. She returned to Wintergreen Arts Center — where she held her first solo exhibition in 2018— on Friday to premiere an exhibit called “Anticipation.” The exhibition features landscape acrylic and watercolor paintings as well as an assorted collection of wearable art products.

While Irving has experimented more with abstract forms of art — including cubism — nature has remained a subject that fascinates her, whether in northern Maine or throughout the world.

“I’ve been visiting a lot of the places of my youth,” said Irving, who grew up in Italy and later in Ontario, Canada. “It’s been great to travel to Italy, New Brunswick, Scotland, Ireland and France, but I also love the nature here in our own backyard.”

Irving named her current exhibit at Wintergreen “Anticipation” in part because the bright, vibrant colors and recurring images of flowers signal the spring season that many people are waiting to see.

“Much of the work is about waiting for nature to come alive again,” Irving said. “I think my colors have become a lot more bold.”

In addition to canvas paintings, Irving has also evolved her collection of wearable art and keepsakes, which include scarves, headbands, postcards, yoga mats, backpacks, canvas bags, greeting cards and pillows.

Recently Irving partnered with Michelle Fitts, the owner of Florals By Fittsy in Portland, to create a collection of wearable art that features a floral design of bright pink, red and blue flowers on a dress, tote bag, athletic top, T-shirt and a buff-style headband.

For the past few years, Irving has been busy holding solo art exhibits locally and taking part in art festivals throughout Maine, which has allowed her to expand the popularity of her wearable art and paintings. Her work is sold at Monica’s Scandinavian Imports and Brambleberry Market in Caribou and Indigo Blues in Bar Harbor. She has designed custom yoga mats for House of Health in Caribou and head scarves for staff members at Cafe Demoiselle in Presque Isle.

Locally, Irving has shown her paintings at The Common Gallery and the Mark and Emily Turner Memorial Library in Presque Isle, and teaches private lessons and at Paint & Sip parties. Around a dozen people attended her exhibit opening at Wintergreen, including Elaine Sipe of Presque Isle, who said she has admired Irving’s work for many years.

“I love her style and the vibrancy of the colors in her work. It’s all very soothing,” Sipe said.

Irving said she has been excited to see the growth in her artwork and her audience and hopes to continue evolving as an artist.

“It’s been a dream of mine for awhile and now I feel ready to take on new experiences,” Irving said.

Irving’s exhibit “Anticipation” is on display throughout the month of February at Wintergreen Arts Center.

At the Houlton Humane Society, we take adopting the cats and dogs in our charge very seriously.
Campaign Corner END_OF_DOCUMENT_TOKEN_TO_BE_REPLACED