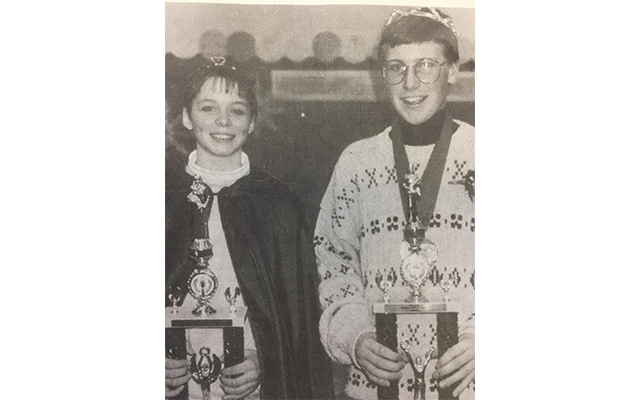 Contributed • February 19, 2020
115 Years Ago - Feb. 22,  1905 Windows -- The windows of the Universalist Church have arrived and been placed in position. The new organ also arrived, and workmen are busy setting it up. Services, which have been held for some time in the Grange Hall, will be held at the church again next Sunday.

Windows — The windows of the Universalist Church have arrived and been placed in position. The new organ also arrived, and workmen are busy setting it up. Services, which have been held for some time in the Grange Hall, will be held at the church again next Sunday.

Turkey — It was reported that four young ladies bought a turkey for Christmas dinner. None of the girls had the nerve to chop its head off so they chloroformed it, although the turkey nearly wrecked the premises before it quit flopping. The girls then dry plucked it and set it in the closet for later use. A few hours later one of the girls went to the closet to get it, and the turkey (having recovered from insufficient anesthetic) calmly walked out of the closet without a stitch on.

State of Maine — A dispatch from Washington dated February 12 says: “Congressman Peters has asked Congress to authorize the treasury to issue 50 cent pieces of a special design to commemorate the 100th anniversary of the State of Maine.”

Teen Camp Donation — The Northeast District of the YMCA now defunct, has donated $1,000 of it’s remaining funds to Aroostook Teen Leadership Camp. The summer camp for pre-teens promotes drug free, healthy lifestyles and is sponsored by the Aroostook Mental Health Center with advisory support from Catholic Charities of Maine.

Cary Clinic Donation — Members of the VFW recently presented a check toward Cary Medical Center’s new speciality clinics and Cancer Services addition . The donation brings the organization total cash donation to $14,500, making it the largest cash contributor to the building fund. The group’s recent gift pushed  the $250,000 goal over the top.

Bringing a new kitten into your home is exciting, whether this is your first or another addition. Your kitten will be entirely reliant on you to ease his/her transition to a new home.
Campaign Corner END_OF_DOCUMENT_TOKEN_TO_BE_REPLACED