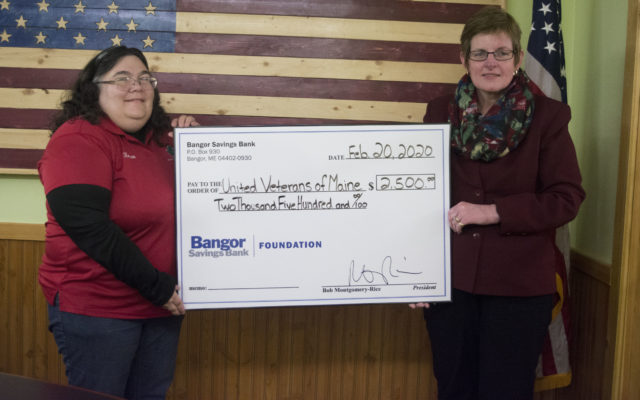 Chris Bouchard • February 21, 2020
The Bangor Savings Bank Foundation presented the Dahlgren-Skidgel Farm of Hope with a $2,500 check to assist with the organization’s annual electricity costs.

CARIBOU, Maine — The Bangor Savings Bank Foundation presented the Dahlgren-Skidgel Farm of Hope with a $2,500 check to assist with the organization’s annual electricity costs.

Dahlgren-Skidgel Farm of Hope is a four-cabin facility operated by United Veterans of Maine in Caribou that houses homeless veterans and their families.

Christine Nickerson, vice president and senior relationship manager at Bangor Savings Bank, said the foundation allows communities with non-profits, such as United Veterans of Maine, to apply for grants.

“We know that oftentimes those folks, if they’re deployed, have family who are left behind and need some resources,” she said. “And once those soldiers return, they often face challenges.”

United Veterans of Maine Finance Director Karen St. Peter said the facility currently has two open beds and recently took in a family from the Houlton area who had been living in a tent.

“They were out there for three months, and luckily enough of it was in the summer, but winter was approaching and they reached out,” St. Peter said. “We got them here in time so they didn’t have to spend cold nights out in the elements.”

St. Peter said the donation would transfer directly to Emera Maine, and go toward the shelter’s annual bill of roughly $12,500. The organization has already received $5,000 via grant funding and with the Bangor Savings Foundation donation of $1,200, the combined total of $7,500 will help the farm keep its lights on through the summer months and into the fall, St. Peter said.

With United Veterans of Maine being a non-profit organization staffed by volunteers, the finance director said all of the funding comes from fundraisers, auctions, concert donations, grants and the overwhelming support of the Caribou community.

And while the farm does not consider the income of any applicants, all residents are considered on a case-by-case basis.

“We look at those who do have an income, and help them get on their feet quicker because they could afford to get into an apartment,” St. Peter said.

She said the group works with organizations like Preble Street and the American Legion to assist with future housing needs such as payment of a security deposit. Volunteer staff also encourage residents to slowly build up furniture and small appliances in their rooms, such as chairs, a microwave or toaster oven, but St. Peter said these are just suggestions and the veterans are not being rushed to move out of the facility.

“A majority of our clients have PTSD of some form and may have anxiety about this pressure, or a date to move out, so we try to avoid that with them,” she said.

Nickerson, who had not heard of the organization until recently, commended St. Peter on the work being done to assist some of the area’s most vulnerable residents.

Just five years ago, the shelter was only a concept started by United Veterans of Maine President John DeVeau. Now the facility has housed several veterans and transitioned more than a dozen to stable living situations.

This year, the organization is holding a “$20 in ‘20” fundraiser. St. Peter said that, with creditors being paid off, the cost of a bed night has now dropped to $20.

Nickerson commended the facility’s success and St. Peter said that while funding issues can present challenges, the reward of helping out homeless veterans makes everything worth it.

“Homelessness brings hopelessness, which brings suicide,” St. Peter said. “If we can bring them back from that hopeless stage and give them a home, there is no better feeling.”

Many of you have been following Luke's story on our Facebook page. Luke came to the Ark last July with his sister Lydia at 8 weeks old. Both Luke and Lydia were in really bad shape with untreated upper respiratory infection.
Campaign Corner END_OF_DOCUMENT_TOKEN_TO_BE_REPLACED