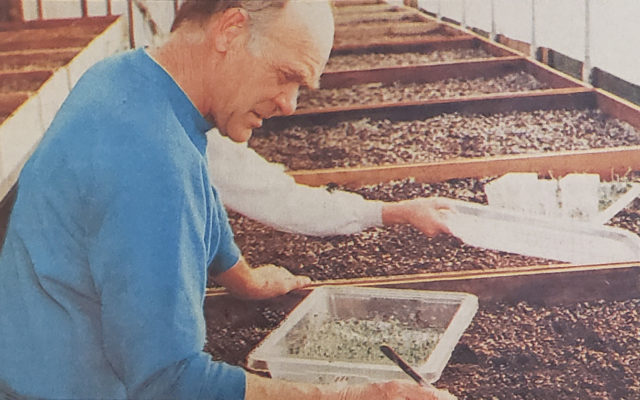 Yvonne Tardie • February 26, 2020
75 Years Ago -  March 1, 1945 Former PI man promoted -- Maurice J. Arsenault, deputy collector, was put in charge of a Major Zone office of the Internal Revenue Service which opened at 131 Elm Street in Biddeford, Fe. 15, for the convenience of the taxpayers residing in Biddeford, Saco and the rest of York County.

Former PI man promoted — Maurice J. Arsenault, deputy collector, was put in charge of a Major Zone office of the Internal Revenue Service which opened at 131 Elm Street in Biddeford, Fe. 15, for the convenience of the taxpayers residing in Biddeford, Saco and the rest of York County.

The office was staffed with three additional deputies. Collector Clinton A. Clauson of Augusta and Louis B. Lausier, mayor of Biddeford, were present at the formal opening. Mr. Arsenault, a former Presque Isle man, and the son of Deleane Arsenault of Chapman Street, was congratulated upon his very fine success.

Joined WAC Medics — Miss Lillian E. Blanchard, daughter of Mr. and Mrs. George Blanchard of Presque Isle, left the city for basic training at Fort Oglethorpe in Georgia. Miss Blanchard graduated from Presque Isle High School with the class of 1941, and attended Westbrook Junior College for two years prior to establishing her civilian occupation as a representative of the Maine Potato Growers’ Association. Private Blanchard, a former member of the Eastern Star, planned on attending medical technicians’ school after basic training and prior to assignment to an Army general hospital.

Betterment awards — Presque Isle received its second and third gold stars in the Maine Community Betterment campaign to assist in the improvement of the cities and towns of Maine at a banquet in Augusta. Eugene L. Coffen of Portland was the master of ceremonies at the first annual awards banquet of the MCB. Cash prizes totaling $4,500 were awarded. Gold Star awards are based on the performance and achievement of each community in the field of education, utilities, transportation, community planning and community services.

Five life members — Nathan Grass, president of the Presque Isle Area Chamber of Commerce, announced that five Live Wire Club members had achieved the required number of points to qualify for a life membership in that group. They were honored and presented plaques at the 25th annual meeting of the chamber. Those members receiving their Senior Live Wire Club Life Memberships were: Theodore H. Beck, Paul H. Fitzhenry, Mellen A Fitzherbert, Richard Irving and Thomas F. Lavin Jr. To qualify for this honor, members must compile a predetermined number of points through collection of delinquent dues and acquisition of new members.

At Presque Isle branch — Katahdin Trust Company President Steven L. Richardson announced the appointment of Bradford (Brad) McCrum as commercial loan officer at the bank’s Presque Isle office. In making the announcement, Richardson said in Brad’s new position, he was responsible for commercial business development and lending in the Central Aroostook area. A Mars Hill native, McCrum attended the Central Aroostook High School in Mars Hill and obtained his bachelor of science from the University of Maine at Orono.

Board members honored — Two long-standing board members of The Aroostook Medical Center were recognized for their volunteer service at the hospital’s annual meeting. Theodore Robert, who stepped down from the board, had served since 1988 in numerous capacities and right before stepping down, as treasurer. Michael McPherson had served on the board since 1987 and had been its chairman for the previous three years.

Bringing a new kitten into your home is exciting, whether this is your first or another addition. Your kitten will be entirely reliant on you to ease his/her transition to a new home.
Campaign Corner END_OF_DOCUMENT_TOKEN_TO_BE_REPLACED