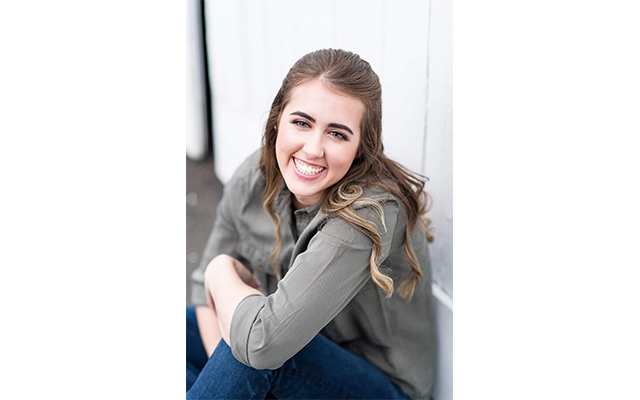 The award sponsored by the Maine Principals’ Association, is given in recognition of a high school senior’s academic achievement and citizenship.

“Throughout her years here at Southern Aroostook, Abigail has distinguished herself in the classroom and as a leader in the school and the community.”  Principal Porter noted in making the award. “She has been very active in many school and community related activities that have accentuated her outstanding character and commitment to excellence. She very much deserves this recognition.”

Stevens is involved in a variety of school and community activities. She is an active member of the National Honor Society and also represented SACS at Dirigo Girls State in 2019. She is a member of SACS Dollars for Scholars, and has been an active member of the yearbook staff for three years. Stevens has also been involved in the drama club, served on the SACS Prom committee, has served on Student Council for three years, and has also served as Student Council President.

She is active in the community through volunteer projects and also participating in her church youth group and as a member of the Bethel Church Worship team.

Stevens is the daughter of Sean and Ann Stevens of Island Falls.

Stevens, Porter, and other award winners and their principals will attend an Honors Luncheon at Jeff’s Catering 12:30 p.m., Saturday, April 4. The Honors Luncheon recognizes these outstanding students with the presentation of an individual plaque and the awarding of seven $1,000 scholarships in the names of Horace O. McGowan, Richard W. Tyler, and Richard A. Durost.  Mr. McGowan, Mr. Tyler, and Mr. Durost were former Maine Principals and MPA Executive Directors. Three additional $1,000 scholarships will be presented through the partnership with Berlin City Auto Group’s Drive for Education.

The Principal’s Award is presented in more than 100 Maine public and private high schools by member principals of the MPA, the professional association which represents Maine’s school administrators.

Halfway Home Pet Rescue in Caribou has partnered with the Houlton Humane Society shelter for a cat spay and neuter clinic on Saturday, May 30, and Sunday, May 31, in Houlton.
Campaign Corner END_OF_DOCUMENT_TOKEN_TO_BE_REPLACED