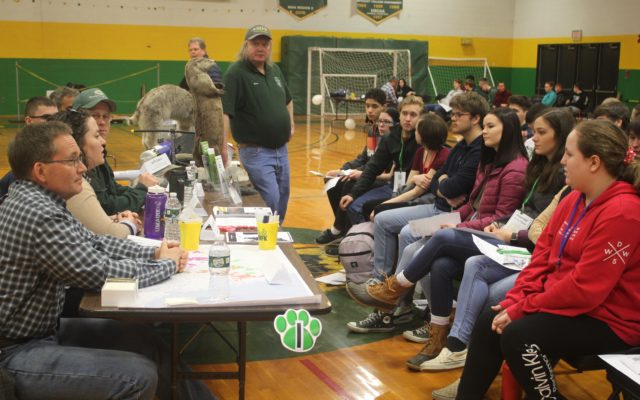 Jessica Potila • March 9, 2020
Students learned about some of the post-secondary educational and career paths available to them.

FORT KENT, Maine —  Approximately 300 Aroostook County high school students gathered at the University of Maine at Fort Kent Sport Center on Friday for a JMG/TRIO event where they learned about some of the post-secondary educational and career paths available to them.

The university’s Interim President Tex Boggs and admissions specialist Davis Cyr were among many administrators and staff who met with the students to answer questions about college life.

Izabella Coniglio, a 16-year-old junior from Presque Isle High School, told Boggs and Cyr that she plans to become a diesel mechanic and will study this subject when she attends the Caribou Tech Center next year.

Coniglio said she is determined to achieve her goal.

“I just want to learn, you know. I don’t just go to class for the fun of it. I go to class to learn,” she said.

Consiglio said that she plans to attend Northern Maine Community College after graduating from high school and admitted that the thought of moving into her own apartment and attending college can be intimidating.

“It’s scary. I’m not so ready to graduate high school — it’s kind of my daily routine,” she said.

Many representatives of Maine businesses also spoke with students at the event.

Irving representative Doug Cyr provided students with information about general career preparedness and provided them with perspectives of what an employer looks for in an employee.

Fort Fairfield sophomore Hailey Tinkam said she plans to follow in the footsteps of her grandfather and brother and join the United States Marine Corps, where she hopes to learn automotive technology.

“I’ve always wanted to be a mechanic,” Tinkham said.

“Trades are on the uptick and there is a lot of opportunity to have your own business,” Doug Cyr said. “Trades are underrated. Some of the most successful classmates of mine went for a two-year plumbing degree and now run their own plumbing businesses.”

The students also learned about different college majors available at the university including criminal justice, forestry, nursing and behavioral science.

Well, normally this time of year we would be gearing up for our annual “Paws for the Cause” walk.  Families and their furry companions would be showing up with generous pledges in hand, ready to enjoy an easy two-mile walk and then some welcomed refreshments afterward.
Campaign Corner END_OF_DOCUMENT_TOKEN_TO_BE_REPLACED