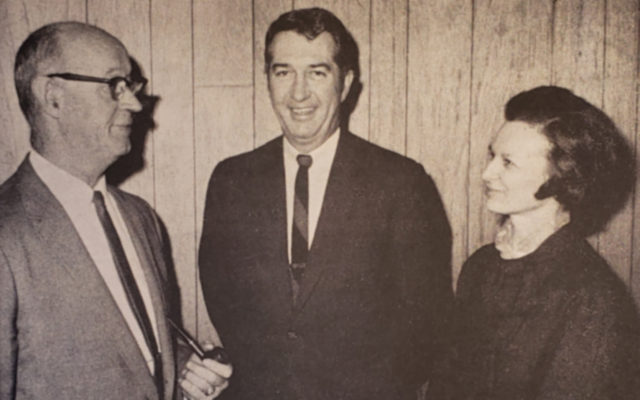 The face of the medal bears the insignia of the company, and the back was suitably engraved with Mr. Wilson’s name and company affiliation data. The medal was given by Special Agent Alber H. Langlois, fieldman for the company, and accompanied by a letter from President Bernard M. Culver.

2nd lieutenant — Robert B. Cook graduated from the Engineer Officer Candidate School, Fort Belvoir, Virginia, on March 7, 1945. He became second lieutenant in the Corps of Engineers, Army of the United States. His mother, Mrs. George R. Cook, lived in this city. Lt. Cook graduated from Presque Isle High School and the University of Maine, Orono, ME. He entered the Army on May 11, 1944, at Fort Devens, Mass. Before entering the service, he was employed by Haller Engineering Association Inc., as paving engineer.

Rotary pays pledge — At the meeting of Rotary in Presque Isle, Ralph A. Brown, chairman of the Rotary Auction, presented Ellis E. Survant, president of the board of directors of A.R. Gould Memorial Hospital, with a check in the amount of $7,500. This brought the total of donations by Rotary, to the building fund of the hospital to $28,700 to date. $36,000 was pledged in 1966.

Martial artists — Students from the Presque Isle, Mars Hill and Ashland branches of Graves Institute of Self Defense traveled to the Tracy’s Annual Fall Karate/Jiu Jitsu Tournament, with the 44 representatives combining to win 47 trophies on the day. Sensei Jerrod Lawrence of Mars Hill won a first-place and a second-place trophy in fighting and throwing, while Sensei Barbara Sullivan won the same honors in impactor and sparring. Sensei Jim Felch garnered a second in throwing and a third in fighting. Bronze belt Suzette Perry of Presque Isle was the lone three-time winner, placing first in jiu jitsu, first in form kata and second in point sparring. Tom Martin of Ashland won a pair of firsts, teaming with Perry in throwing and taking the power impactor by himself. White belts Gabrielle Smith and Brittany Collins were dual winners as were green belts Chad Walter and Rob Collins. All four were from Mars Hill.

Many of you have been following Luke's story on our Facebook page. Luke came to the Ark last July with his sister Lydia at 8 weeks old. Both Luke and Lydia were in really bad shape with untreated upper respiratory infection.
Campaign Corner END_OF_DOCUMENT_TOKEN_TO_BE_REPLACED