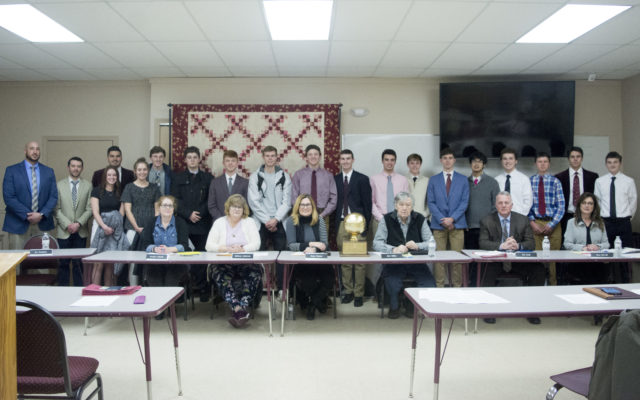 School board and city formally recognize work of student athletes

Chris Bouchard • March 18, 2020
The RSU 39 Board of Education and Caribou City Council recently recognized the hard work of student athletes throughout the winter season.

CARIBOU, Maine — The RSU 39 Board of Education and Caribou City Council recently recognized the hard work of student athletes throughout the winter season, including the basketball team for its second consecutive state championship victory as well as the wrestling and ski teams.

During an RSU 39 meeting held on March 4, Caribou Athletic Director Evan Graves commended the boys basketball team for not only winning another state championship, but also its mature attitude when representing the city during away games.

“This group of guys represented Caribou High School with pride and class,” he said. “Since late Friday night I’ve heard nothing but positive things from athletic coaches, community members and random people throughout the state of Maine, as well as Maine Principals Association representatives. Coach Kyle Corrigan has done a great job working with these young men not only to play great basketball, but also to have class.”

Tanya Sleeper, chairperson of the RSU 39 Board of Education, thanked the team for coming and for representing the community so well.

RSU 39 Superintendent Tim Doak commended the coaches for shaping the team into a successful and mature group of athletes.

“There’s nowhere I go where people don’t stop me and say how professional Caribou is,” he said. “The administration takes a lot of credit when things go well, and a lot of credit when they’re bad, but you deserve all the credit for this. They will remember this for the rest of their lives, and you’re all a part of that, so thank you.” 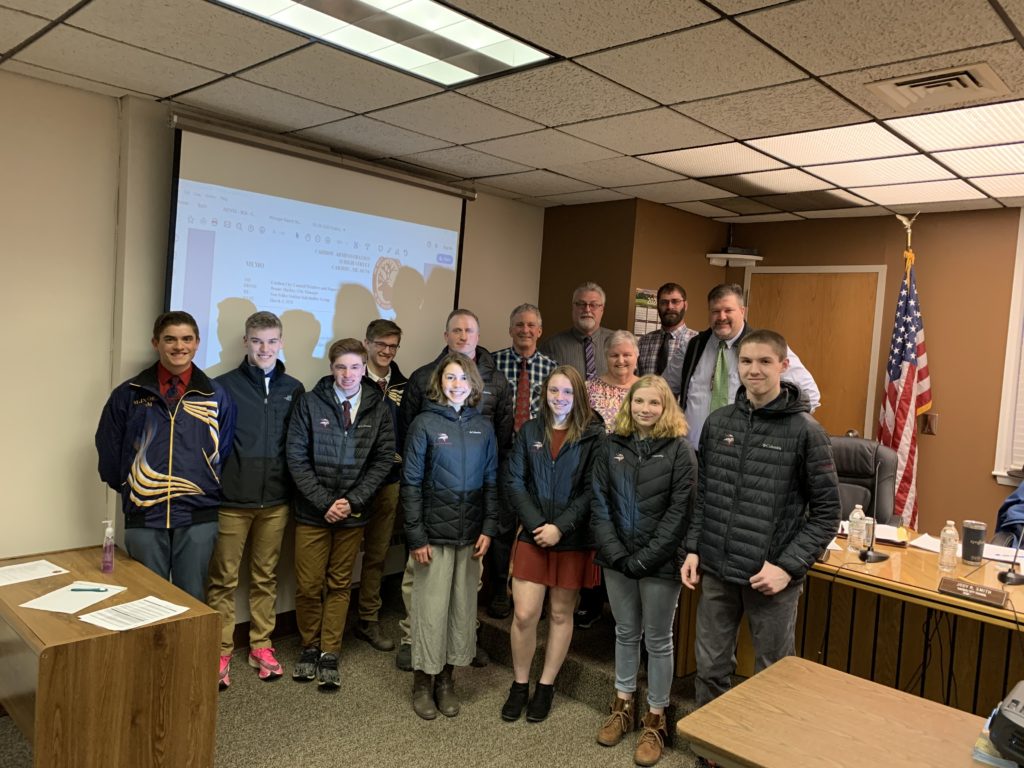 The board, and later the city council, also recognized the work of the boys and girls Nordic ski teams, and five skiers who finished as top 10 individuals. Graves told the school board that both the boys and girls team finished in second place overall.

George H. Ferland, assistant coach for the Nordic Ski Team, brought the team to a March 9 City Council meeting, where he and city officials recognized their success this season.

“They excelled all season,” Ferland said, “and in fact, they were undefeated in The County. They’re a tough group of kids, and they really put in a lot of effort. They don’t always get the accolades, but I’m glad they’re being recognized tonight.”

Mayor Mark Goughan congratulated the ski team, adding that he believes sports are an important part of the educational system.

“It’s a great avenue to teach hard work, sportsmanship and perseverance,” he said. “Sometimes you don’t win, but you plug along and you work, and it’s a great life lesson, and it’s going to serve you very well in the future.”

He told the young skiers that they’re not only making their parents proud, but the entire community.

“We’re honored,” he said, “and we want to thank you very much for your hard work and the way that you represent the city of Caribou to the rest of Maine.”

Many of you have been following Luke's story on our Facebook page. Luke came to the Ark last July with his sister Lydia at 8 weeks old. Both Luke and Lydia were in really bad shape with untreated upper respiratory infection.
Campaign Corner END_OF_DOCUMENT_TOKEN_TO_BE_REPLACED