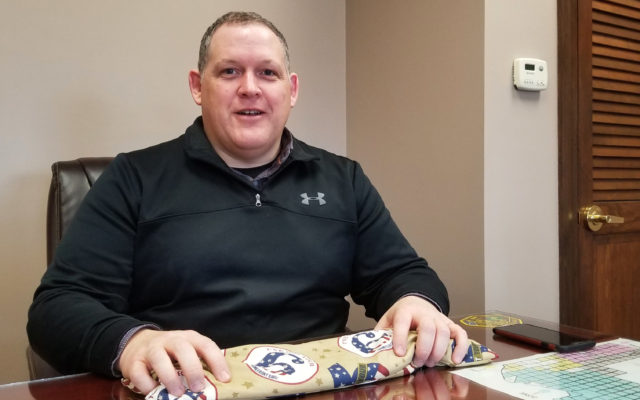 Bridgewater youth gives law enforcement a handmade pat on the back

Joseph Cyr • March 19, 2020
A 9-year-old girl from Bridgewater made 36 therapeutic rice bags for local law enforcement chiefs and their dispatchers as a token of appreciation for the work they do. Nichols also threw in a box of Girl Scout cookies for good measure.

HOULTON, Maine — Police dispatchers and sheriff deputies, like many law enforcement officers, find themselves dealing with less than pleasant situations in their daily routines.

So when Aroostook County Sheriff Shawn Gillen learned of a special gift left for himself and his dispatchers on Monday, he was nearly moved to tears by the kind gesture.

Lila Nichols, the 9-year-old granddaughter of Chris and Bim Finemore of Monticello, made 36 rice bags for local law enforcement chiefs and their dispatchers as a token of appreciation for the work they do. Nichols also threw in a box of Girl Scout cookies for good measure.

“We have high stress jobs and it is refreshing to know there are people out there, who we may not know, who care,” Gillen said. “It’s nice to know people realize we may be stressed and are thinking about us. Especially from a 9-year-old … it’s heartwarming.”

Gillen said the gift allowed him to take a moment from what had otherwise been a stressful day to think about the people the Sheriff’s Office serves.

Chris Finemore said her granddaughter came up with the idea on her own. The bags can be warmed for heat therapy or frozen for use as ice packs.

“It was one of those things where one thing leads to another,” Finemore said. “Lila was working on her Bronze Award for Girl Scouts, where she was collecting reusable shopping bags to donate to Mildred’s Food Pantry.”

Finemore said the 9-year-old has been volunteering at the food pantry for a couple of years now and decided she wanted to learn how to sew with the idea of making a reusable shopping bag. She then decided to make a rice bag for her “aunt” Cheyenne McNally, who is a part-time dispatcher for the ACSO. McNally is the girlfriend of Finemore’s son.

“Lila thought why just make one, when she could make them for everybody,” Finnemore said.

Several yards of fabric and 100 pounds of rice later, she had created all 36 rice bags for law enforcement. Included with the gifts was a poem the girl wrote to the Sheriff’s dispatchers, thanking them for their service.

“Dispatchers sitting in your chair, always there to take the call. You’re the hope on the other end, the role you play is not small,” a portion of the poem reads.

Finemore said her granddaughter was very mature for her age and is always thinking of ways to help others.

“She is such a unique person,” Finemore said. “She really is like a grown-up in a little kid’s body.”

Correction: An earlier version of this story misspelled the Finemore’s last name. Chris and Bim Finemore also reside in Monticello, not Bridgewater.