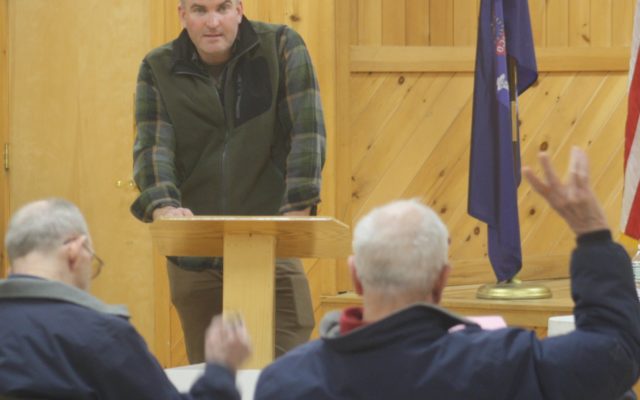 David Marino Jr. • March 19, 2020
Voter turnout in the municipal election was the highest since 2009, likely because of a ballot measure residents approved permitting the sale of liquor in Mapleton.

MAPLETON, Maine — The town of Mapleton held its annual meeting and municipal election on Monday, March 16, with the town choosing to go through with the votes amidst the COVID-19 pandemic.

Turnout for the town meeting, held at the Mapleton Lions Hall, was slightly lower than last year. But voter turnout in the municipal election was the highest since 2009, likely because of a ballot measure residents approved permitting the sale of liquor in Mapleton.

A referendum concerning whether Maine could issue liquor licenses to businesses in Mapleton passed with 80 percent of the vote. Twenty percent voted against the measure, which stemmed from a legal challenge to Mapleton One Stop.

David Dunlavey was elected to a three-year term on the Mapleton Select Board with 56 percent of the vote, beating out Kim Archer, who received 44 percent.

David Maxie won the position of assessor with seven write-in votes. No candidate had appeared on the ballot for the three-year seat.

Voters elected Amos Dean to a three-year term for sewer district trustee with 57 percent of the vote, beating out Jeffrey Craig, who received 43 percent.

The meeting was moderated by resident volunteer Wes Lavigne and only lasted about 15 minutes: the four members of the public who attended did not dispute any of the 31 acts recommended by the Mapleton Select Board.

A variety of matters were sorted out, including setting a 9 percent interest rate for taxes unpaid to the town by Nov. 1, 2020. The town appropriated $36,142 for general government, $35,304 for public safety, $5,000 for the sewer district and $27,120 for community services, among other appropriations, including those in undesignated and reserve accounts

Susan Skidgell, deputy clerk/registrar of voters for Mapleton, said there were no controversial issues in this year’s budget, and that it hadn’t changed much since last year.

“In municipal government, you have to pay the light bill, the phone bill, heat buildings, plow out roads,” Skidgell said. “Basically, that’s what we just did: authorize the town to pay the bills.”

Skidgell said that the town of Mapleton considered canceling the election and town meeting because of fears about the spread of COVID-19. She said it ultimately decided against canceling because both the election and town meeting would not violate Gov. Janet Mills’ directive to halt gatherings of fewer than 50 people at the time. That number since has been lowered to 10.

There were 14 total people in the room on Monday, including town staff, members of the public, and the select board. Skidgell said this was down from 17 in the 2019 meeting,

Mapleton Town Manager Sandra Fournier, who began her position this year after previously working as Aroostook County’s deputy county administrator of finance, described the voter turnout as “amazing.” With 95 votes, it was the highest since 2009, when 145 people voted.

Fournier said the quickness and unanimity of the meeting showcased the immense faith the Mapleton public had in its select board. The lower turnout did not dishearten her — she said a higher turnout might have caused problems with the seating arrangement.

“I was very pleased that it wasn’t a high turnout because of what we are dealing with right now with COVID-19,” Fournier said.

Hand sanitizer was available at the meeting, and Skidgell said staff had made a strong effort to clean all surfaces. On March 18, two days after the meeting, the Mapleton Town Office announced that its municipal office would be closed to the public beginning on March 19.

The liquor referendum stems from a dispute between the Mapleton One Stop convenience store and gas station and the state of Maine.

One Stop Owner Travis Mastro said the state awarded his shop a liquor license three years ago. But state officials recently sent him a letter saying Mapleton was not in compliance with the Mapleton town charter’s rules on liquor sales.

Tim Poulin, deputy director of the Maine Bureau of Alcoholic Beverages and Lottery Operations, said that Mapleton had banned the sale of liquor within the town in 1968, and that Monday’s vote had undone that ban. Despite the ban, the state had previously given One Stop a Class VIII liquor license, allowing for the sale of spirits.

Well, normally this time of year we would be gearing up for our annual “Paws for the Cause” walk.  Families and their furry companions would be showing up with generous pledges in hand, ready to enjoy an easy two-mile walk and then some welcomed refreshments afterward.
Campaign Corner END_OF_DOCUMENT_TOKEN_TO_BE_REPLACED