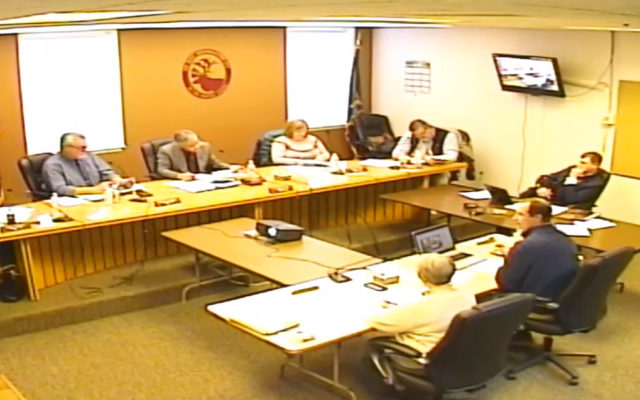 The meeting was closed to in-person attendance by the public and broadcast via YouTube Channel 1301 in the interest of public safety.

At the time of the meeting, Caribou and Presque Isle — the only two cities in Aroostook — were the only two that had opted to keep their municipal offices open while encouraging the public to contact city officials via email, phone or mail. The two cities have since closed their offices to the public, citing an executive order issued by Maine Gov. Janet Mills on March 24.

Mayor Mark Goughan said that while the council considered not meeting at all, it eventually decided to try closing to the public and broadcasting online in an effort to “keep things as normal as we possibly can.”

Caribou City Manager Dennis Marker said the city has looked into obtaining a business account through the video communications app “Zoom,” which would allow each councilor to discuss city business via webcam, smartphone or tablet with one another, and for the exchange to be broadcast online and via cable.

With the new format for conducting meetings, officials read online comments as part of the city’s regular “Public Forum” session.

Among those was Woods’ email, in which he urged city officials to take coronavirus seriously, and thus minimize its impact in The County.

Woods said that even though the world is still collectively learning about the virus, one thing everyone can agree on is that Aroostook County still has an opportunity to act before the virus siginficantly hits the area.

“Social distancing needs to be a minimum practice,” Woods wrote. “We can do better than that. We can discourage meetings and gatherings and decide to heed the warnings of the Maine CDC. We can and should be limiting traffic to our city offices as well as all city buildings while we still provide services to our citizens.”

“Things are different and will likely be that way for quite a while,” he said.

He told city officials that his office is available to provide any additional information if needed.

“Please take this virus seriously and take whatever protective measures you can now,” Woods wrote. “Share as much as you can with city employees and get the word out in town.”

The mayor thanked Woods for his comments and City Manager Dennis Marker read an online comment from an individual using the name “Caribou Resident,” who accused the city of being inconsistent by having the city office open all week, but closing the March 23 city council meeting to the public.

“Get your act together Mr. Mayor,” the commenter wrote. “People are dying from this. Close all city offices to the public.”

Goughan said he would not acknowledge the comment as the individual did not provide a real name.

“New rule, unless you’re willing to give us your name, your comments don’t count,” he said. “We always ask people to state their names and where they live when they get to a public forum. It’s kind of a general rule of thumb. We’ll take any comments with people that are willing to leave their name.”

Councilor Joan Theirault responded to the commenter, saying that the meeting does fall within the new rules proposed by Gov. Janet Mills, which limits any gathering to 10 people. With councilor Jody Smith’s absence, eight were present during the March 23 council meeting.

Marker later briefed the council on how the city is responding to the COVID-19 pandemic. As of the March 23 meeting, the Caribou Public Library is closed to the public, but staff is still working in the building.

Like the library, the Caribou Wellness and Recreation Center is also closed to the public while staff continue to work in the building.

The Public Works Department, which Marker said is already generally not open to the public, is practicing additional cleaning procedures for the equipment and vehicles as well as hand washing and sanitizing their work area.

The fire and police departments have limited public access to the lobby areas only.

Farrin said it’s not too early to request an absentee ballot for the June primary election. And while it may be too early to actually obtain the ballot, Farrin said she is working to ensure that people are aware of their options now as the city prepares for the election.

Many of you have been following Luke's story on our Facebook page. Luke came to the Ark last July with his sister Lydia at 8 weeks old. Both Luke and Lydia were in really bad shape with untreated upper respiratory infection.
Campaign Corner END_OF_DOCUMENT_TOKEN_TO_BE_REPLACED