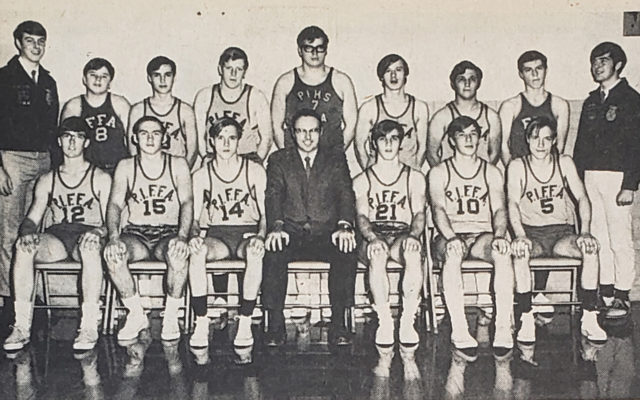 Compiled by Yvonne Tardie, Special to The County • March 25, 2020
Scout Floyd Wakefield of Ashland was presented with Scouting’s highest award to a boy at a Court of Honor held at the High School in Presque Isle.

Ashland Scout received Eagle Award — Scout Floyd Wakefield of Ashland was presented with Scouting’s highest award to a boy at a Court of Honor held at the High School in Presque Isle. The Scouts in the Central District, who have been passed by their respective boards of review, received their badges of higher rank. Robert W. Sproul, executive of Katahdin Area Council, presented the Eagle Award, and W.A. Morang, Field Scout executive in Aroostook County, in a candlelight service, inducted a boy into Scouting. A film, “Trail to Citizenship,” was shown. Arrangements were under the direction of District Commissioner Lewis Bishop.

Wildcats took rubber game — The Presque Isle Wildcats defeated the Fort Fairfield team 38 to 26 in the Ray Goding Post benefit game. Nearly $175 was realized for the Legion Memorial Home. Spike Williams, in charge of the affair, said that the operation of school officials and the various units involved was excellent.

Former Mars Hill man won Bronze Star — U.S. Army Vietnam (AHTNC) Army Specialist Five Douglas E. Pierce, 22, son of Mr. and Mrs. Herman E. Pierce, Limestone, received the Bronze Star Medal in Vietnam. Spec. 5 Pierce was presented the award for meritorious service in connection with military operations against hostile forces in Vietnam while assigned as an avionics specialist in the 163 Aviation Company of the 101 Airborne Division (Airmobile). The specialist entered the Army in Oct. 1967 and was stationed at Fort Gordon, GA. He also held the Army Commendation Medal and the Vietnamese Gallantry Cross.

Two retiring firemen honored — A potluck supper was held by the Volunteer Firemen of Presque Isle in honor of two firemen who retired from the force, Gilly Moreau and Albert Johnson. A program planned by Pete McPherson and Rodney Hilt was presented, including the presentation of fishing rods and reels to Moreau and Johnson.

Young writers — Three sixth-graders from Cunningham Middle School were chosen in the essay contest, “What the Flag means to me,” sponsored by the Presque Isle Elks Lodge. Taking part in the presentation were Jim Murchison, Elks representative, and Lana Avery, sixth-grade instructor; Natalie Hamel and Andy Beaulieu, $50 bond winners each; and Katelyn Rasche, $100 bond winner.

Chappelle gained recognition — Thomas “Skip” Chappelle, a former long-time men’s basketball coach at the University of Maine and one of the top players in the state’s history, received the 1995 Ray Bicknell Award for distinguished service by the Maine Basketball Coaches  and Writers Association at their annual postseason awards banquet at Thomas College in Waterville March 21. Chappelle, 55, was believed to be the only Maine native to earn first-team All-New England honors at the high school, prep and college basketball All-American ever to come out of the University of Maine.

Many of you have been following Luke's story on our Facebook page. Luke came to the Ark last July with his sister Lydia at 8 weeks old. Both Luke and Lydia were in really bad shape with untreated upper respiratory infection.
Campaign Corner END_OF_DOCUMENT_TOKEN_TO_BE_REPLACED