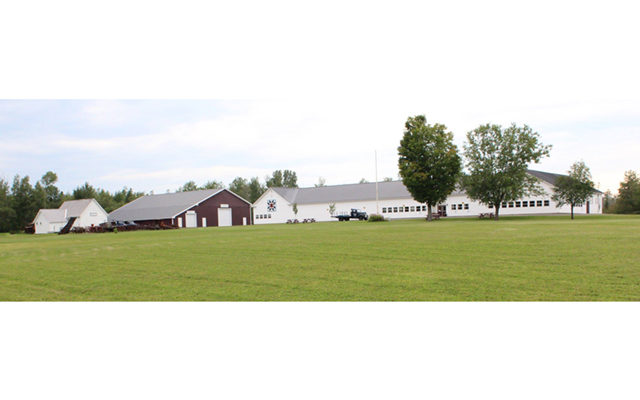 Karen Donato, Special to The County • April 5, 2017
The Southern Aroostook Agricultural Museum board has elected Jamey Watson, a lifelong Littleton resident, to lead the non-profit organization for the next two years.

LITTLETON, Maine — The Southern Aroostook Agricultural Museum board has elected Jamey Watson, a lifelong Littleton resident, to lead the non-profit organization for the next two years. Francis Fitzpatrick of Houlton, whose term was up, relinquished the gavel at the March 4 meeting. Fitzpatrick had held this position for the past four years.

Watson, a graduate of Glen Cove Christian Academy and Unity College, owns Watson Wells, a well-drilling business started by his grandfather Ellery. He and his nephew, James were instrumental in drilling a well by the Ross School at the museum and installing a hand-pump for visitors to experience during visits to the museum.

Colby Shaw, also of Littleton, was elected as vice president. Shaw, a Littleton selectman, is retired from the custodial department of RSU 29 and now works part-time plowing the roads in the winter and doing carpentry during the summer. He has most recently completed two buildings at the museum; a general store and filling station. His next project is a building for blacksmithing and barrel- and basket-making.

Watson and Shaw are joined by Barry Campbell, treasurer. Campbell, is one of the founders of the agricultural museum and has been in the farming business for more than 50 years.

Debbie Melvin, secretary, is a third grade teacher in RSU 29 and lives in Monticello. Her interest in the preservation of county memorabilia was influenced by her mother, Charlotte Melvin, an instructor at the former Ricker College, who was also a local historian.

Museum meetings are held the first and third Saturdays of each month. They are open to the public and begin at 9 a.m. The organization is a 501c3 non-profit and operates solely with volunteer help. If you have a few extra hours please consider lending a hand to help at monthly suppers, organizing displays, making repairs to buildings or furniture, painting projects,  helping with tours during the summer, housekeeping or cataloging items.

The museum will host a public supper on Saturday, April 8 beginning at 4:30. The fee is $9 per person. There will also be raffle tickets available to purchase for a John Deere riding lawnmower or the option of $1,000 cash to the winner. A drawing will take place on May 20 at the monthly supper.

Tickets can be purchased by calling 538-0050 or 694-6099. The museum volunteers will participate in the Houlton Trade Show at the Millar Arena on both Saturday and Sunday, April 8 and 9. Tickets will also be available there.