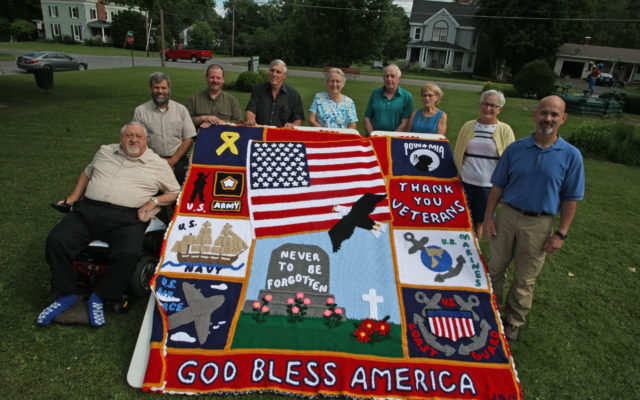 Sarah Berthiaume, Special to The County • July 29, 2017
It turns out, honoring veterans can be a tough job sometimes.

LINNEUS, Maine — It turns out, honoring veterans can be a tough job sometimes.

For more than a year, members of the Linneus Veterans’ Memorial Committee have been trying to gain support for a monument to honor the town’s veterans. Response so far has not been huge.

The committee started seeking veterans’ names for the monument in February 2016, and since then, Committee Chairman Keith Harrington said they’ve only received about 10 names for the memorial.

“Unfortunately, the response has been underwhelming,” he said. “It may force us to establish a generic veterans’ memorial instead.”

They’ve had a slow start to their fund-raisers, too.

With organizational help from Vital Pathways, the committee is holding two raffles — one for a veteran-themed afghan made by Elaine Jordan and the other a 10-gun raffle. All proceeds will benefit the memorial. Originally, the committee hoped to draw winners’ names at Linneus Field Days, but Harrington said that plan had to change.

“We need to sell at least 500 tickets,” he explained. “So, the drawing is delayed until we reach that.”

But those challenges don’t seem to deter the committee from moving forward.

With the goal of honoring Linneus veterans past and present, the committee has been busy since it got its start in 2016.

“The town does have a veterans’ memorial just for World War II, but it’s not all-inclusive,” explained Harrington. “And the plan is to move that monument and incorporate in with the new one when we finalize plans for a new site.”

He said the committee has a collection of different sites it is considering for the new memorial. Committee Member Tim Cady, a local surveyor, is helping narrow that location down.

“Best case scenario, based on the responses we’ve had so far, we’ll have the new memorial up by 2020,” said Harrington, who added that they’re estimating total costs to hit $15,000. That would include groundwork, stonework and engraving, he said.

And some support has already been pledged. Jim Palmer of Palmer Construction has donated the groundwork for the project, and Brian Stewart of Stewart Engineering volunteered to help the committee develop a site plan once they decide where the memorial will be located.

Whether it’s donating or volunteering, all community support makes a big difference, said the committee chair, and the finished memorial will be a lasting show of appreciation to local veterans.

“This memorial will be a way of saying thank you for those veterans who have honorably served,” he said. “Their service was sacrifice for them, as well as, their family members.”

Tickets for the 10-Gun raffle are available at Clark’s Variety in Linneus, MACS Trading Post in Houlton and RC Logging in Smyrna. Tickets on the veterans’ afghan are available from committee members.

For the first time since 2019, there is competition for open seats on the Houlton Town Council
Pets END_OF_DOCUMENT_TOKEN_TO_BE_REPLACED

We hope everyone enjoyed a wonderful holiday season and is looking forward to the new year.  December was a busy month at the Central Aroostook Humane Society with so many people and businesses bringing in much-needed supplies and monetary donations, which help us to take care of the special temporary pets in our care.
What's Happening This Week END_OF_DOCUMENT_TOKEN_TO_BE_REPLACED