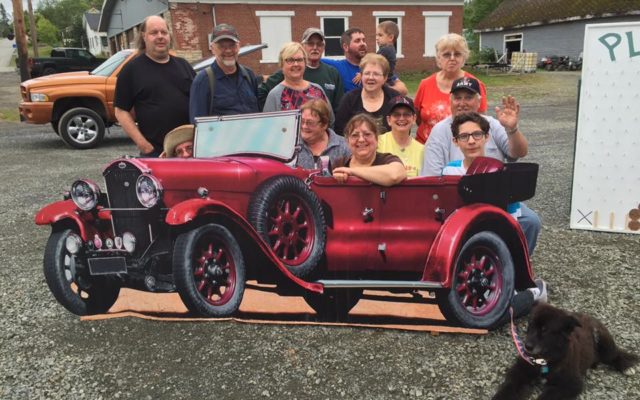 Contributed • September 1, 2017
Drivers of more than 40 vintage autos accelerated the energy level in downtown Smyrna during the inaugural “Blast From the Past” Saturday, Aug. 19.

SMYRNA, Maine — Drivers of more than 40 vintage autos accelerated the energy level in downtown Smyrna during the inaugural “Blast From the Past” Saturday, Aug. 19.

A well attended crowd of more than 150 participants consumed 125 lobsters, two cases of fair sausage, over 100 hot dogs and two dozen ears of corn, according to Ken Bustard, one of the event volunteers. 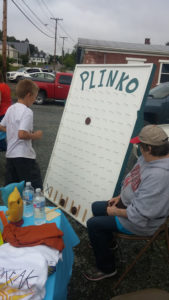 The day started with a cloudy overcast skies and light rain, discouraging some from venturing out. However, as the sky broke around mid-day, and the sun overtook any precipitation, vehicles started flowing into Smyrna. As Arnold Roach, a retired potato farmer from Smyrna put it, “This is the most exciting thing that has happened in Smyrna for years.”

Several participants did not complete a registration card, due to arriving later, or just electing not to get their free raffle tickets. The thirty one who did register included Ross Crandall (1969 Chevelle) and David Condon (1981 Volkswagen Rabbit) from Smyrna. Right next door from Oakfield was Jonathan Auen (1985 F150 Ford), Joshua Crandall (1968 C-10), Diana Rockwell (1992 Mercury Capri), and Lionel Hamm Sr. (1986 Cadillac).

Representing Dyer Brook were Dennis Burpee (2002 Pontiac Firehawk) and Glen Stiles (1970 Chevrolet). Wayne Watson (1936 Plymouth) was the sole driver from New Limerick, while Bustard the sole driver from Bucksport (1989 Jeep Wrangler) and Leroy and Jackie Colella (1990 Chevy 454SS) from Cary. Sheila and Keith Murchie towed their 1969 Trike with their 1964 Pontiac GTO from Hodgdon. 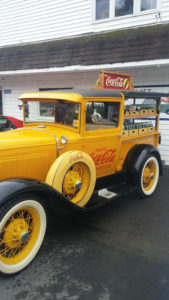 A totally restored Coke delivery truck was just one of many premiere vintage automobiles.
(Courtesy of Ken Bustard)

There were also several Farmall tractors present. The only one registering was Jeremy Boutilier (1930 Farmall Regular) from Oakfield.

Equally popular to the vintage autos and tractors were the many vintage bicycles brought by several people. Twenty plus bicycles lined the streets, as people tried them out, and reminisced the “good old days”. 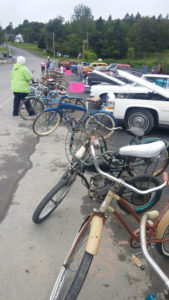 Various vintage bicycles, along with cars, line the street in downtown Smyrna.
(Courtesy of Ken Bustard)

Dan Brown, volunteer DJ, entertained through the afternoon with his play list of 60s and 70s music. Various announcements were made throughout the day, acknowledging the two main businesses in downtown Smyrna – R C Logging and Keye’s Outfitters.

Many drivers participated in “Junk in the Trunk,” which is basically a swap meet for both old and newer auto parts. Participants were encouraged to contribute one item to the evening auction, proceeds to benefit activities at Smyrna Merrill Historical Society. The auction proved successful, netting just over $600.

The cruise-in included a larger than life size “Plinko” which was constructed by Ralph and Cindy Bartman. Kids (and adults) paid $1.00 to win from a wide selection of prizes. This inaugural event proved successful beyond anyone’s expectations. Plans are already under way for next year, with the expectation of even more participants. For more information, you can contact Ralph Bartman, event organizer at 757-8411.