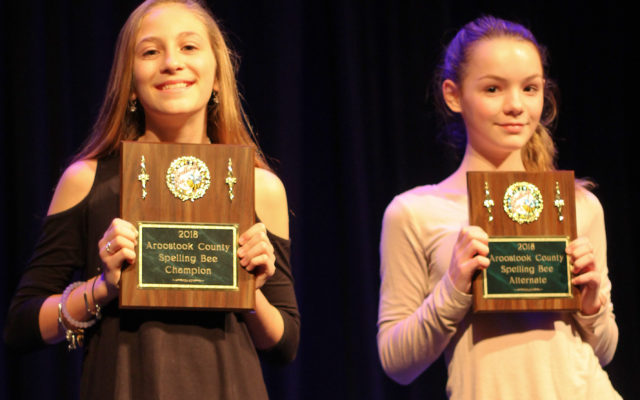 Don Eno • February 9, 2018
Madawaska’s Taylor Pelletier was confident when she was tasked Thursday night with spelling “bilious” in the fifth round of the Aroostook County Spelling bee, held at the University of Maine at Fort Kent’s Fox Auditorium.

FORT KENT, Maine — Madawaska’s Taylor Pelletier was confident when she was tasked Thursday night with spelling “bilious” in the fifth round of the Aroostook County Spelling bee, held at the University of Maine at Fort Kent’s Fox Auditorium.

“Bilious” turned out to be the winning word for Pelletier, a seventh grade student at Madawaska Middle/High School, as she spelled her way to first place at the bee.

“It feels great,” Pelletier said after the competition.

“I felt good going into the bee,” she said  “I already knew the words, because I studied them.”

Only 10 students remained on stage after the first round. That number was whittled down to six in the next round.

Among the words that tripped up students Thursday were “gargoyle,” “azalea,” “claustrophobic,” “crematoria,” and “sanguine.”

Pelletier said her toughest word of the night was “intimation.”

She was one of three students left on the stage as round four of the spelling bee began Thursday evening.

Pelletier was able to successfully spell “requisites.” When Easton’s Logan Bernier misspelled “annexation” and Greater Houlton Christian Academy’s Brock Thomson was unable to correctly spell “lassitude,” Pelletier advanced to her solo round and was given the word “bilious.”

“‘I know this one. I’ll get it,,” Pelleter said she told herself when she was given the word.

Bernier and Thompson then battled each other through two runner-up rounds before Bernier was able to spell “avocations” for her second place finish.

As the runner-up, Bernier serves as the alternate from Aroostook County and will replace the winner should Pelletier be unable to attend the state spelling bee on March 24 at the University of Southern Maine’s Hannaford Hall.

It was a freezing day across The County, but you could hardly tell from the turnout. Even after a massive surge in absentee ballot requests across the Central Aroostook area, droves of people came out to vote in Presque Isle, Mapleton, Washburn and Fort Fairfield.
Pets END_OF_DOCUMENT_TOKEN_TO_BE_REPLACED