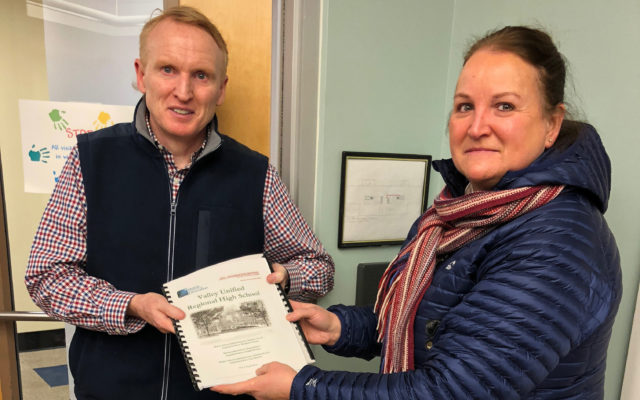 Don Eno • February 14, 2018
The State Board of Education provided one awesome Valentine’s Day wish to the St. John Valley on Wednesday when board members gave top marks to a proposed new regional high school

FORT KENT, Maine — The State Board of Education provided one awesome Valentine’s Day wish to the St. John Valley on Wednesday when board members gave top marks to a proposed new regional high school for three area school districts.

“We have just passed the first checkpoint, which is huge,”  Superintendent Ben Sirois of SAD 27 in the Fort Kent area said in an email to staff following the board of education’s vote to accept the Maine Department of Education’s scoring for finalists vying for the state-funded pilot project.

Sirois cautioned, however, that the vote on the final rankings was just the start of a process that could take up to two months before a final determination is made concerning which projects get funded.

The intent of the Integrated, Consolidated 9–16 Educational Facility Pilot Project is to encourage neighboring school districts with declining enrollments to work together to combine resources and save costs. The preferred project, according to the state, would combine three or more high schools to create a new regional high school integrated with a career and technical education school and with the University of Maine System and the Maine Community College System.

Maine School Administrative Districts 27 and 33 in the Fort Kent and Frenchville areas, the Madawaska School District, and the St. John Valley Technology Center are collaborating on a proposal to build a Valley United Regional High School in the St. John Valley.

“Communities across Maine are demonstrating that when the state provides them with support and incentives, they will work together to create more opportunities for students in an efficient and effective way,” Gov. Paul LePage said Wednesday in a press release about the Board of Education’s vote. “I commend the local superintendents and school boards for putting the needs of their students first.”

Seven applications were submitted for the pilot school program. Only three were invited to continue onto the second phase of the application process.

Next in the process is a 30-day review period for each applicant to look over the process for any errors they feel may have been made with the DOE’s point totals. After that, the Commissioner of Education has 30 days to go over any appeals and to finalize the “commissioner’s approved list” to bring back to the State Board of Education.

Once the State Board of Education approves the commissioner’s list, a determination will be made concerning which projects on the list will get funded.

The location of a new school in the Valley has not yet been discussed. If the final grant is approved, a local team would be assembled to look at possible locations, but the ultimate decision of where to build the school would be up to the state.

“When these projects are up and running, they will serve as a shining example of what is possible when our communities work together to benefit students,” LePage said in his release.

Siros said grant money from the state would cover the cost of the new high school project, with no local funding being needed. The state has indicated that up to $100 million is available for construction of such a pilot project school, Sirois has said. The final cost for a new St. John Valley high school would not be known until the school is designed and planned out. That could still take a few years.

While it is not likely the state would fund more than one pilot project, Sirois said the decision ultimately will rest with the State Board of Education to determine whether more than one deserving proposal gets funded. The state also has the right to reject all applications.

The proposed new high school in the Valley is among several grants and projects the three local school districts have been working on over the last the two years.

It was a freezing day across The County, but you could hardly tell from the turnout. Even after a massive surge in absentee ballot requests across the Central Aroostook area, droves of people came out to vote in Presque Isle, Mapleton, Washburn and Fort Fairfield.
Pets END_OF_DOCUMENT_TOKEN_TO_BE_REPLACED