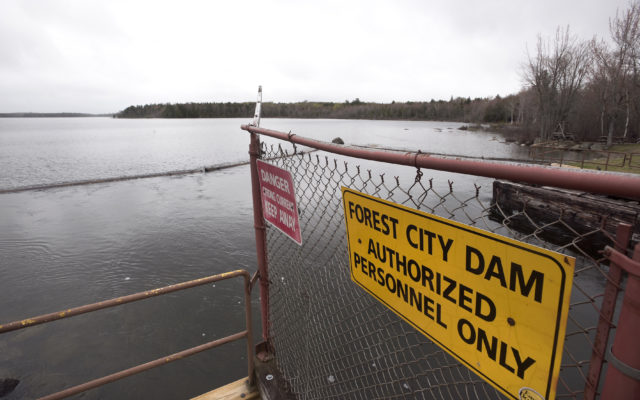 Tempers flare during meeting over ownership of northern Maine dam

Jen Lynds • June 22, 2018
More than 50 citizens flocked to East Grand High School on June 19 to hear the results of a study that contributed to the festering controversy over a Washington County dam.

DANFORTH, Maine — More than 50 citizens flocked to East Grand High School on June 19 to hear the results of a study that contributed to the festering controversy over a Washington County dam.

The meeting was punctuated by angry cries from residents who were concerned that any damage to the lake or the lowering of water levels would destroy the economy in the towns that rely on the lake for employment. Communities in both Aroostook and Washington counties rely on the lake as an economic resource, and the communities are dotted with lodges, guides and businesses who rely on the fishermen, sportsmen and tourists who flock to East Grand Lake each year. Several residents expressed fear that Woodland Pulp, which owns the dam, would set the dam gates at a certain level and not manipulate water flows as it has done for years. The result of that would be a largely dewatered East Grand Lake.

The meeting of the International Joint Commission St. Croix River Watershed Board took place over two hours on Tuesday evening. It included a presentation by the U.S. Geological Survey about a study that was done to estimate the unregulated monthly, annual and peak streamflows in Forest City Stream and lake levels in East Grand Lake. The massive waterbody lies on the international border between Maine and New Brunswick.

The controversy over the Forest City dam, which is located in Washington County, has been brewing ever since Woodland Pulp, sought relief in May 2017 from the Federal Energy Regulatory Commission dam licensing requirements.

Woodland Pulp estimated that meeting the federal environmental and recreational requirements would cost the company $6 million more than it would make from any power generation during the 30-year life of the dam license, which went into effect in 2015. The company thus filed paperwork with FERC to surrender its license to operate the dam and decommission it. The request was not granted.

Officials from the International Joint Commission reported that a look at historical records from 1975 to 2015 indicate that water levels at Forest City, Spednic Lake, Grand Falls Flowage and Milltown, along with water flows at Forest City, Vanceboro and Baring, were above the long term average in May and June but below average from June to October.

Pamela J. Lombard, a hydrologist with the USGS Maine Water Science Center in Augusta, conducted the study for the U.S. Geological Survey to estimate the unregulated monthly, annual and peak streamflows on the impacted waterways. She told the crowd that the report showed “average monthly lake levels would likely be from 1.8 feet to 5.4 feet lower with the gates of the Forest City dam opened than they have been historically.”

Mike Saunders of Fosterville, New Brunswick, said during the meeting that he had owned a camp on East Grand Lake since 1974. He said it was unfathomable that anyone would tamper with the lake, which he considered a natural beauty.

“You are talking about destroying a beautiful body of water,” he said. “There are no signs of human habitat on some parts of the lake, and there are not many places left in the world where you can find such beauty and solitude. And once we destroy it, it is gone. Not just for us, but for our grandchildren and their children.”

A remaining issue, however, is that the swap in ownership and management won’t take place unless FERC issues a written determination that the facility, known as the Forest City Project, doesn’t require a FERC license in order to operate.

In addition, the Maine DIF&W will not assume ownership unless the state and Woodland Pulp execute an agreement that calls for Woodland Pulp to operate and maintain the facility at no cost to the state for a period of 15 years.

The bill was signed into law by Gov. Paul LePage.

Residents at the meeting expressed doubt about a state takeover or that FERC would allow it to run unlicensed.

Board members told the crowd that they were still awaiting a decision from FERC and additional studies before a decision will be made. They had no timeline for when that would occur, but said that Woodland Pulp would manage the dam until a decision is made.

For all it does to refresh us, burn energy and keep us sharp, we all need playtime, dogs and cats included. Sharing playtime with pets has the added benefit of strengthening the bond between us, so we better understand one another.
Campaign Corner END_OF_DOCUMENT_TOKEN_TO_BE_REPLACED