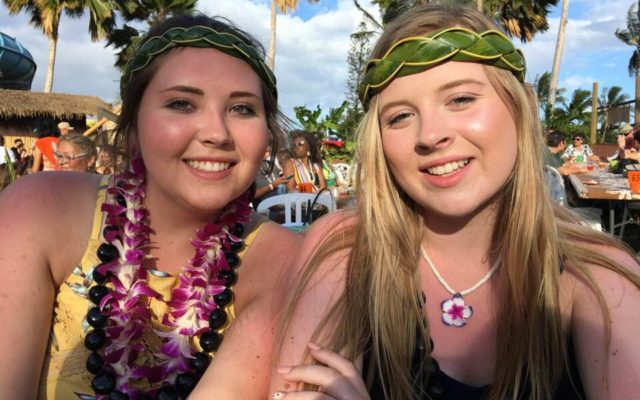 Karen Donato, Special to The County • July 2, 2018
Back in 2015, Addie Woods was looking forward to her sophomore year at Hodgdon High School when her life took a turn that changed everything.

HODGDON, Maine — Back in 2015, Addie Woods was looking forward to her sophomore year at Hodgdon High School when her life took a turn that changed everything.

Addie, the daughter of Stephanie Harris and John Woods, appeared to be a healthy, active 15-year-old involved in many school related activities, including basketball and softball.

Basketball season was just beginning, but Addie was not feeling well. Just back to school after being out with an ear infection, she still wasn’t feeling herself. Stephanie received a call at noon that she needed to come and get her from school. Knowing this was not normal, she called the doctor and they went to the hospital for some blood work, thinking maybe she had mono.

Just arriving back home, the doctor called requesting that Stephanie come back for a consultation. The blood work was abnormal. Stephanie’s son Blake, just into his senior year overheard the conversation. They decided not to alarm Addie and made an excuse of going into town to get something for dinner. The doctor told her what she suspected and to go home and pack a bag; they needed to take Addie to Eastern Maine Medical Center in Bangor that night. 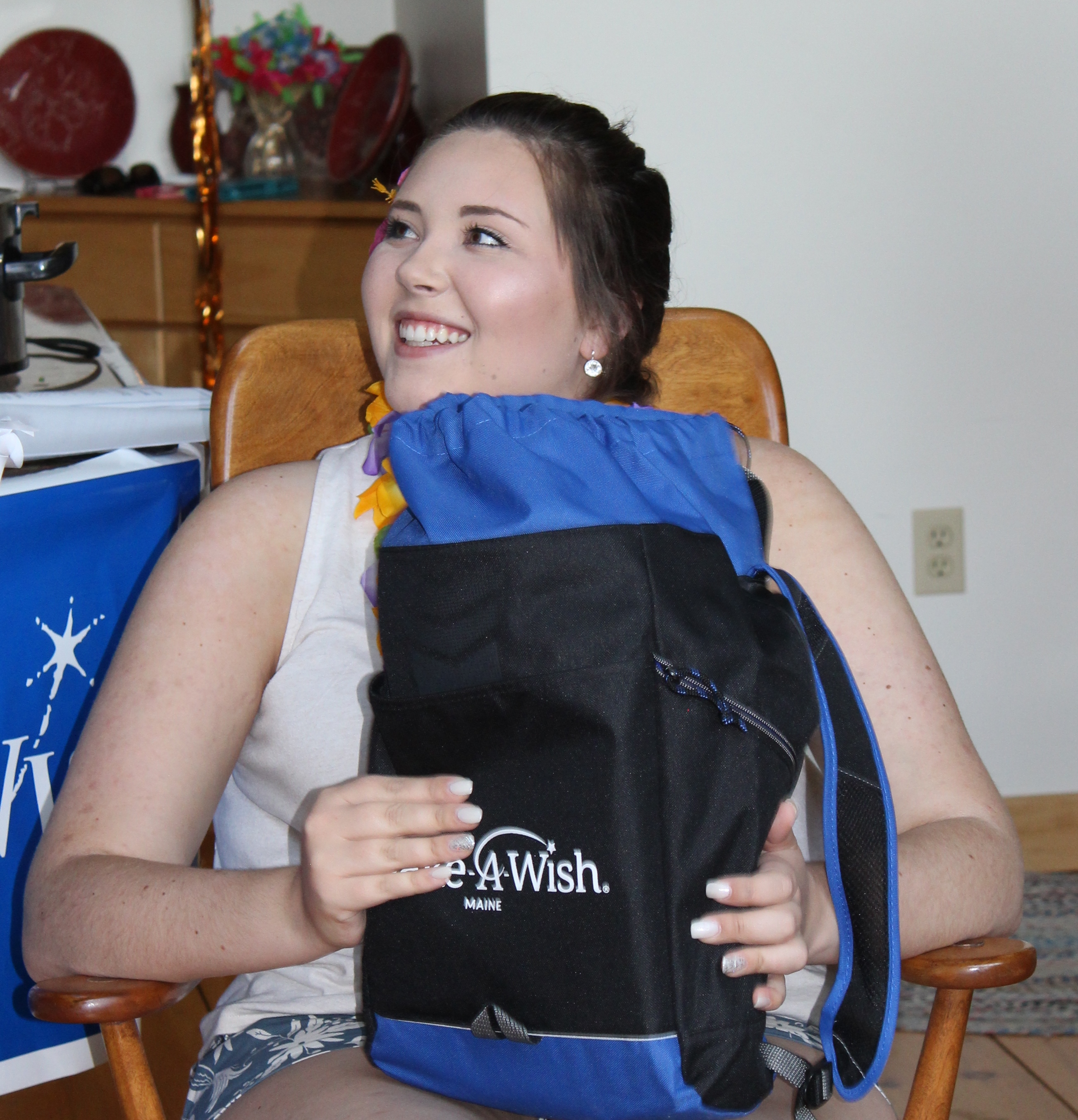 Addie Woods received a special Make a Wish back pack to take on her trip to Hawaii from wish granter, Marilyn Carey. (Courtesy of Woods Family)

Once Stephanie heard the news, that night became a blur. How could this be happening? It was Thanksgiving week and she was supposed to be hosting a big family dinner. The world just stopped.

Stephanie called her husband, Mike Harris, who was on his way home from Caribou. He assured her he would be in town for the drive to Bangor.

“We decided not to share everything with Addie and that Blake would drive her to the hospital, leaving me the opportunity to contact family members and to have someone take care of my younger daughter, Aidynn”, said Stephanie.

Stephanie, a middle school English teacher at Hodgdon also needed to let her principal know she would need a substitute.

“I knew I was living my worst fears”, said Stephanie.

Once admitted, Addie spent the next 28 days confined to a hospital room with her mom by her side and other family members coming for short visits. She was diagnosed with acute lymphoblastic leukemia, a cancer of the blood and bone marrow. This type of cancer usually gets worse quickly if not treated right away, according to the National Cancer Institute. Addie was high risk because of her age.

Addie got home just a couple of days before Christmas Eve. After that, it was spending more time going to treatments in Brewer and dealing with many side effects. She seemed susceptible to any side effect mentioned by the doctors. Addie was unable to be in crowds due to her compromised immune system, therefore losing her junior year at school, as well as the freedom to attend any large group gathering. She kept up with school work by doing her assignments at home and with tutors. 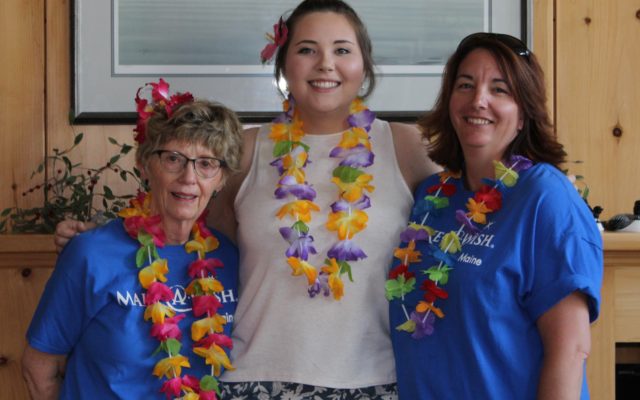 Addie Woods, center , diagnosed in the fall of 2015 with acute lymphoblastic leukemia received a gift of a trip to Oahu with her family from Make A Wish Foundation of Maine. She was a guest at the home of Marilyn Carey, left, local wish granter and Tonya Fitzpatrick who is also on the Make A Wish team. Woods and her family enjoyed a Hawaiian themed party with a variety of foods and tropical decorations. Other team members include: Karen King, Lori Tash, Jodie Peabody, Debbie Clark, Nedra Hanson, Hollie Ingraham, Regina Thibodeau, Jennifer Carmichael, Danny Carmichael and Karen Donato. (Courtesy of Woods Family)

Through the course of her illness, the support from family, friends and the community was overwhelming. Stephanie was able to take a year off to take care of Addie through the understanding of her school administration.

Athletic teams throughout the County and beyond raised money to help with expenses. At the time, Blake, also a basketball player was often surprised at away games with a presentation of a donation for his sister and even a former student of Stephanie’s, Josh McGuire, now an athletic director in Machias spearheaded a fundraiser at Shead High School.

One of Stephanie’s co-workers, Karen Sattler greeted a private Facebook page for Addie every day with a note of encouragement, including a photo of a giraffe, one of Addie’s favorite animals as the main character to show support. The giraffe or giraffes were sometimes in a comical situation. This start of the day gave everyone in the group a lift.

It’s been a difficult two and a half years. Addie missed school activities, hanging out with friends, athletic games and celebrations, shopping and eating out. She missed proms and special assemblies. Not fair to a teenager who should be enjoying the best years of carefree living.

Her family also made sacrifices. Stephanie, who is a dedicated mother to her three children, could not always be in three places at once. Blake who was busy with his last year of high school and navigating college applications didn’t always have his family in the crowd to cheer him on, while younger sister, Aidynn was settling into junior high life. They will be forever grateful to their family members and friends who stepped in to help them out with various acts of kindness and support.

Through this journey the family met Marilyn Carey and Tonya Fitzpatrick, local wish granters with the Maine Make-a-Wish Foundation. They gave Addie and her family something else to focus on; a dream of doing something special when she was feeling better.

What or where would Addie like to do or go? Addie was told to dream big, like the whoopie pies they loved from Grammies Country Inn.  After lots of thought, Addie chose to go to the Hawaiian Island of Oahu, a treat not just for herself, but for her family. Through the ups and downs of this illness, Addie and her family now had something to look forward to.

As plans were set in motion for this trip the family was invited to the “Reveal Party” a few days after Addie’s high school graduation. There they were guests of a Hawaiian decorated venue, sampled popular Hawaiian food and learned of their itinerary.

They were to be transported to Bangor by a limousine for their flight. They would be staying at a Waikiki Beach hotel. While there, they would tour the island, take a sunset cruise, go parasailing, spend time at a spa and participate in a luau.

Due to business obligations, Addie’s stepfather was unable to go, so Stephanie’s cousin, Darci Bubar, a nurse practitioner took his place. She had been living in Bangor at the time of Addie’s illness and had provided not only support, but a place for them to stay when the distance back home was too far to go at times.

For Addie, the trip was everything she could have dreamed.

“My favorite things to do in Hawaii were parasailing, snorkeling, finding cool places to eat, and all the warm weather,” Addie said.

As Stephanie shared their highs and lows of the last three years, she was so impressed with the Make-a-Wish team. “They not only were concerned for Addie, but Marilyn showed up at my house before Blake’s graduation with a special handkerchief for me, just in case I needed it to wipe away a few tears. And when Addie was suffering from excruciating mouth sores, Marilyn shared the idea of eating watermelon sherbet and drinking chilled tonic water as a soothing remedy. It helped!”

Addie’s final treatment was late this spring. She was able to march at her graduation and she graduated as a member of the National Honor Society. She received the All-Around-Female award for the Class of 2018. Addie will attend the University of Maine in Orono where she will major in biology.

Due to her compromised immune system she will live off campus. She is excited to move on with her life. Blake, who is attending Husson University will live nearby and be a frequent guest, as Addie has a passion for cooking and received a Kitchen-Aide mixer for graduation.

Through it all the Harris-Woods family found out just how far-reaching the support can be. Never in their wildest dreams did they expect strangers to have fundraisers, send cards of encouragement or give gifts to help Addie. Since then they too have participated in helping with other benefits and raising money for cancer research.

Their trip to Hawaii in mid-June was more than they could ever have imagined, but coming home was special too. Addie’s corgi, Meredith, had spent most of her time under Addie’s bed in her absence. There was lots of face licking, tail wagging and crying. Her buddy helped her get through many long days and nights since becoming part of the family two years ago. 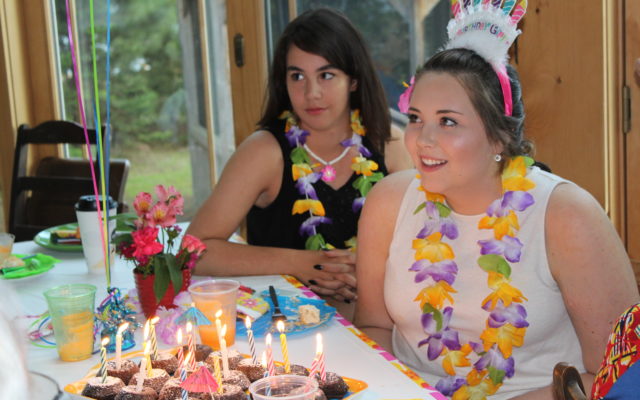 Addie Woods, right with her childhood friend, Kora Lambert enjoy an early 18th birthday celebration at a Make A Wish party in Woods honor for a family vacation to the island of Oahu. Woods, who just ended treatments for acute lymphoblastic leukemia was looking forward to a break from hospitals with her family. Her flight on June 18 the same day as her 18th birthday extended the celebration by several hours due to traveling through several time zones. (Courtesy of Woods family)