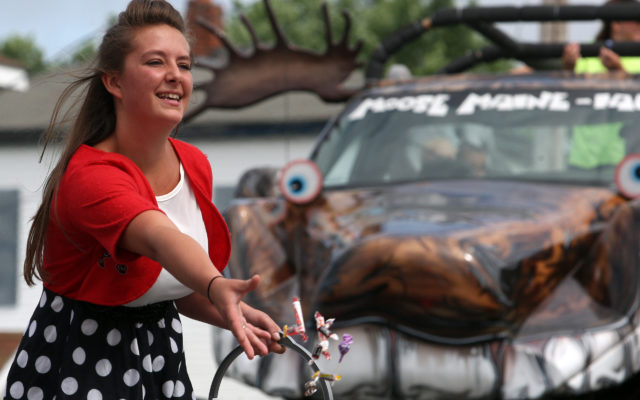 Joseph Cyr • July 31, 2018
The town of Danforth was bustling with activity over the weekend as residents enjoyed the annual Summerfest celebration.

DANFORTH, Maine –The town of Danforth was bustling with activity over the weekend as residents enjoyed the annual Summerfest celebration.

A rainy forecast did little to dampen the excitement for Friday’s events, which featured a children’s bicycle parade, a family street dance with DJ, and the popular Danforth Fire Department’s annual chicken barbecue at the fire station.

Saturday morning began with a flurry of color as a group of dedicated runners and walkers participated in a “Color Run,” followed by a craft fair and parade. Starting on the Bancroft Road, the parade wound its way through the heart of downtown Danforth, with plenty of candy being tossed to the many people who lined the street.

Several entries in the parade used the theme of the 1950s to dust off poodle skirts and leather jackets. Machias Savings Bank featured the most colorful items from the 1950s with several participants donning “Pink Ladies” jackets or other era-appropriate items.

Traffic was stopped along U.S. Route 1 and the Springfield Road, as the parade made its way through Central Street and onto Depot Street before ending at the Mill Yard Restaurant.

Following the parade, a number of children’s games were held, while later in the day the popular shopping cart races took place. A bean supper, put on by the American Legion Rex L. McKenney Post 45 was followed by a concert from the band “Rock Revelation.” Saturday concluded with a large fireworks display.

I was mentioning to our board of directors this past week that I got a quarterly report from a large online retailer who will donate a portion of my purchases to a charity I select.
Campaign Corner END_OF_DOCUMENT_TOKEN_TO_BE_REPLACED