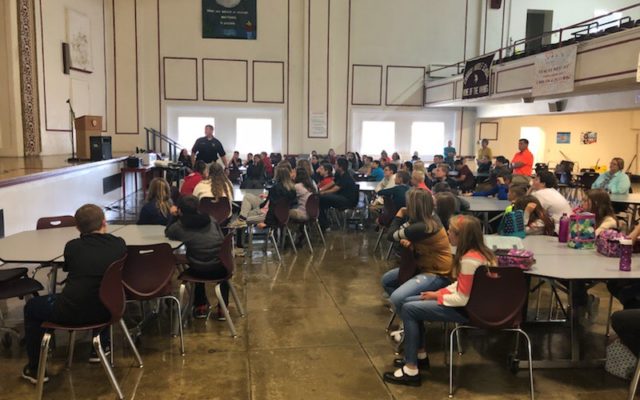 Chris Bouchard • September 27, 2018
Students and teachers in Caribou’s elementary, middle, and high school all went through training earlier this month in Alice, a program that emphasizes handling potentially violent intruders or terrorists by running, hiding, and, as a last resort, retaliating.

CARIBOU, Maine — Students and teachers in Caribou’s elementary, middle, and high school all went through training earlier this month in Alice, a program that emphasizes handling potentially violent intruders or terrorists by running, hiding, and, as a last resort, retaliating.

Six law enforcement officers representing the Caribou Police Department, the Aroostook County Sheriff’s Office, and the Maine State Police taught the course on Sept. 10 and 11, and principals at each school said the training went over fairly well.

Caribou High School Principal Travis Barnes said the officers held four group sessions for each grade in the Caribou Performing Arts Center on Sept. 10. Barnes said the training was done in 45 to 50 minute sessions throughout the morning in order to reach the “sheer volume of kids” at the high school.

The principal said the focus for high school training was to emphasize that everyone in school is responsible for safety, not just the students and teachers, and not just the principal or the newly hired school resource officer. 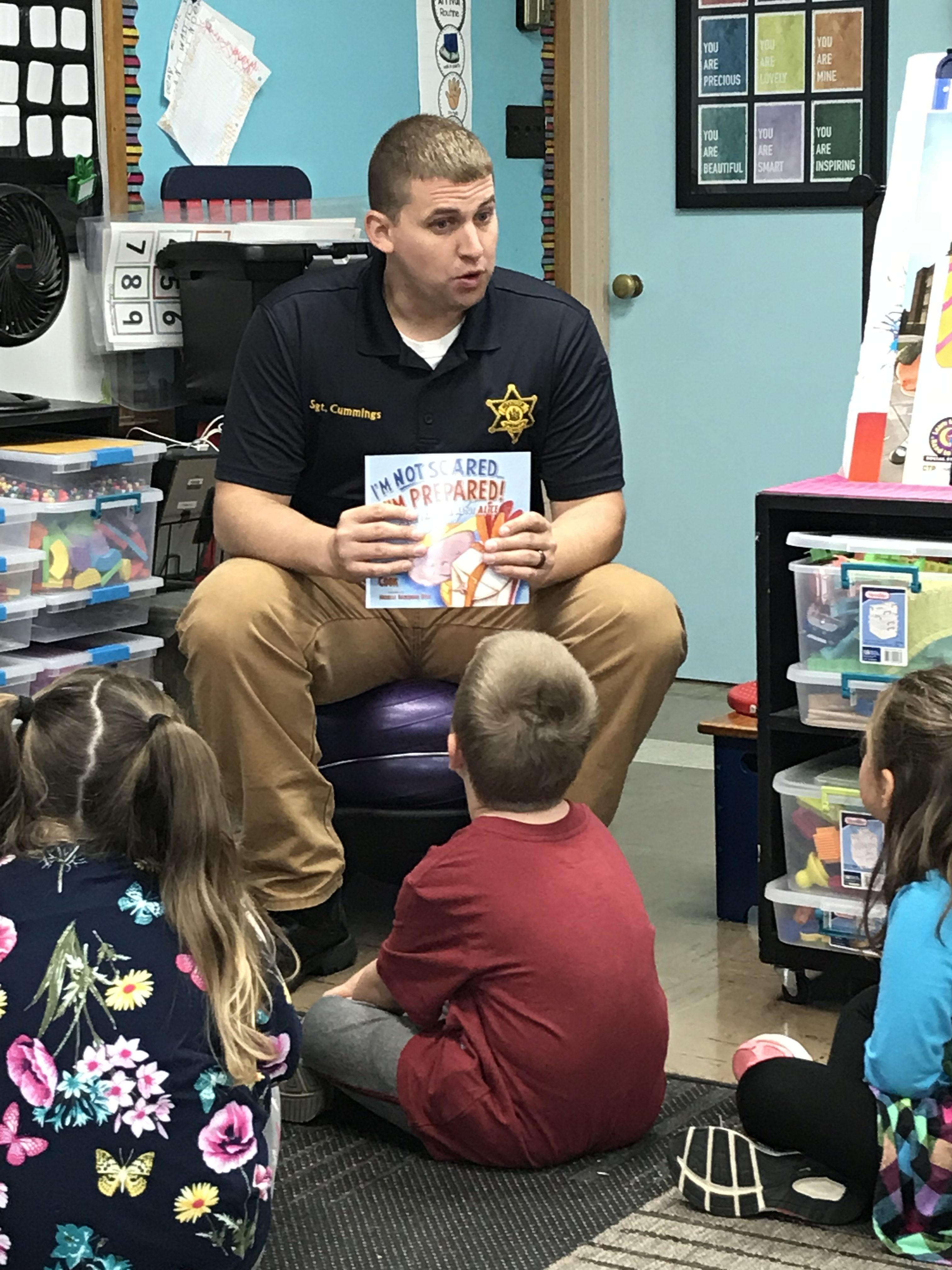 Sgt. Matt Cummings of the Aroostook County Sheriff’s Office reads Caribou kindergarteners a book about how to deal with the “big bad wolf” as part of an ALICE training program in which Caribou elementary, middle, and high school students were taught how to react in the event of a school shooting or violent incident. (Courtesy of Jennifer Poitras)

“The point is that we all see the inner workings of the school,” he said, “and they really pushed the message that you have to say something if you hear or see something suspicious. You’ve got to report it.”

Ideally, Barnes said that if students make a point to report anything suspicious, the ALICE training should hopefully never have to come into play.

The high school training, which differed from what was taught in the elementary and middle school, went into a bit more detail regarding how to retaliate if running and hiding is no longer an option.

As a defensive measure, ALICE instructors showed students how to create a good barricade that would ideally prevent an intruder or shooter from entering a classroom. If that barricade is somehow broken and there are no hiding spots in the room, then they were shown how to “swarm” and overpower an intruder or terrorist as that person enters the room.

Barnes said students were given tennis balls and shown how to “counter an intruder coming into a room,” at which point they were told to run or evacuate as soon as a safe opportunity presented itself.

Barnes said he heard that students were primarily “glad they had the opportunity” to receive the training, adding that while no parents called him with any issues about the program, he was aware of a couple phone calls made by parents to other faculty members.

“I think parents think we’re training kids to fight back,” he said, “which is really not the idea. The whole premise around ALICE is getting kids to talk about what they say and to report anything suspicious. It’s not about fighting back all the time, although that is one aspect of the program. We want them to run and hide and, most importantly, to be safe.”

Barnes said that the program was “starkly different” when taught to second graders at Teague Park Elementary School, as the officers had to walk a tightrope between preparing students while not frightening them.

The Teague Park program, according to Principal Cheryl Hallowell, involved officers coming to read a book to the young students on Sept. 11.

The program was “very low key,” according to Hallowell, who added that the students were “not at all” frightened by the threat or possibility of an intruder following the training.

The program in Caribou Middle School combined aspects of both the high school and Teague Park Elementary School sessions.

Principal Lee Caron said the sixth to eighth graders’ training was similar to the high school, while the fourth and fifth graders went through training that was somewhere between Teague Park and the high school in terms of how officers described potentially dangerous situations.

“We had six amazing presenters,” Caron said, “and they definitely geared the conversation to the level of the children. They walked through the protocols of what to do, and how to be safe, in a dangerous situation. Seventh and eighth graders, he said, were taught how to barricade and throw objects much like the high schoolers, as well as the swarming technique.

He said that out of 425 middle schoolers who went through the program, only one parent called with concerns, because their child came home and said he was taught “how to go after a bad guy.”

Caron said the parent was reassured after he explained that the “fighting back” aspect of the program is meant as an “absolute last resort,” and that the emphasis is on both running and hiding.

He cited the Columbine High School massacre of 1999, in which students were told to hide in a library despite the existence of an escape route in that room. 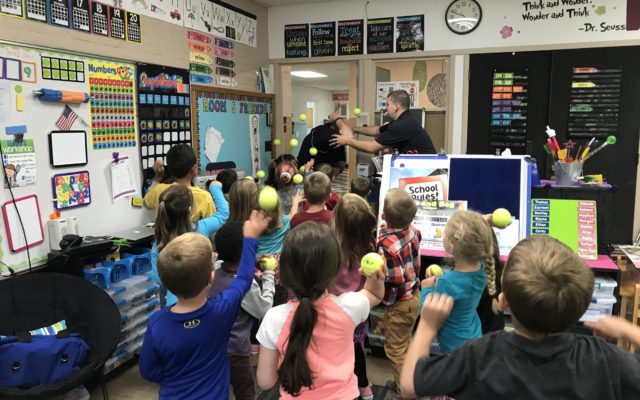 “Even though there was an escape route,” he said, “those students were trained to stay put and hide.”

All in all, Caron said the concerned parent “felt so much better after” their conversation.

The only other phone call was to RSU 39 Superintendent Tim Doak from a parent sharing similar concerns. Much like Caron’s call, Doak said the concerns came from a student who, in her excitement, only told her parents that she was taught to fight back.

“I explained that throwing something is step three,” Doak said, “and that steps one and two are running and hiding.”

Doak said that other shootings, such as at Columbine and Virginia Tech, have shown that hiding is “not always the best scenario.”

“That one phone call ended nicely,” Doak said. “She totally agreed, and was just concerned because her daughter came home and said, ‘Hey Mom, we learned how to throw things at a bad person today.’”

Overall, Doak said students and staff at all three schools were happy to receive the training, and that he and staff are now looking at how to handle a potentially lengthy lockdown. He mentioned the possibility of procuring a lockdown kit in the event that certain rooms are locked down for “four or five hours.” Such a kit could include water, food bars and a portable toilet.

According to Doak, Barnes, Caron, and Hallowell, the training, on the whole, has put many students and teachers at ease when faced with the possibility of a potentially violent school incident.

“The resource officer is one of the best gifts the community could have given us,” he said. “The response time is less than a minute, and he’s already building great relationships with students.”

Many of you have been following Luke's story on our Facebook page. Luke came to the Ark last July with his sister Lydia at 8 weeks old. Both Luke and Lydia were in really bad shape with untreated upper respiratory infection.
Campaign Corner END_OF_DOCUMENT_TOKEN_TO_BE_REPLACED