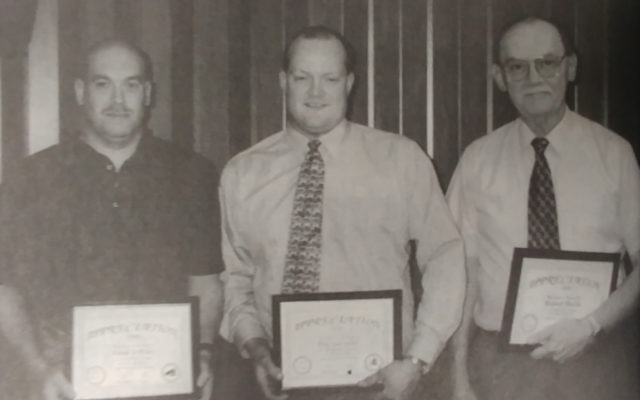 Contributed • November 7, 2018
A number of the smaller boys were enjoying the first skating of the season Wednesday on Collins Pond.

Winter — A number of the smaller boys were enjoying the first skating of the season Wednesday on Collins Pond.  Meanwhile, a heavy snowstorm began on Friday night, continuing without cessation throughout the day Saturday.  It is estimated about a foot of snow fell.

Accident — Lewis Gagnon, while on his way to Caribou on Saturday night from Fort Fairfield, was run into by an automobile.  Mr. Gagnon’s horse jumped on the car, breaking the windshield, steering gear, lights and half of the top of the auto.  The horse was cut very badly, so bad that it bled several quarts and had to be taken to a veterinarian for treatment. Both men were thrown about three rods.  Mr. Gagnon was not hurt much, but the other man’s face was cut quite badly.

Shiny new — Carl. A.A. Johnson is building a shed on the corner of Lyndon Avenue and Washburn Street, and will occupy it for the manufacture of monuments.  Mr. Johnson is an expert stone cutter by trade.

Army Nurses Corps — Miss Mildred S.R. Wieden, R.N., daughter of Rev. and Mrs. O.C. Wieden of New Sweden, recently enlisted in the Army Nurses Corps.  Miss Wieden returned from England in the fall of 1942, where she had spent 15 months with the Red Cross Harvard Unit.

New golf course? — The Northern Aroostook Recreation Center of Caribou has made a new application for a Rural Conservation and Development loan this time in the amount of $120,000, for construction of a nine-hole golf course on the New Sweden Road.  The loan docket includes plans for a 30-by-40-foot split-level pro shop, according to Raymond E. Amsden, county supervisor of Farmers Home Administration with offices in Caribou. Amsden says he anticipates an answer to the application within a week or so and construction may commence in the spring of 1969.  The site has already been selected as an option having been secured on the Sanger Maxwell farm, Sweden Road, for 230-acres, about 130 of which is cleared land.

Art show — The second art show of the season is now on display at the Nylander Museum in Caribou on Main Street and will remain for two weeks through Nov. 25.  Included in the exhibit are a variety of media, watercolor by Roger Deering, woodcuts by Carroll Thayer Berry, and silkscreen by Francis Hamabe and other well known names.

Left large footprints — Caribou native Olof P. Pierson died Wednesday at the age of 87.  He is remembered by friends and family as a creative man who was the “father of the french fried potato,” a genius, and a humorous and patient father.  He was someone who left his “footprints on the sands of time,” according to one lifelong friend. Pierson developed the first pack of frozen french fries while employed at the H.C. Baxter Co. in Hartland, according to his son Hugh.  His other inventions included the steam peeler and shallow fat fryer used to manufacture frozen french fries.

Sample — Maine humorist Tim Sample will autograph his newest video “Maine Humor: Behind the Barn” at Mr. Paperback at Skyway Plaza on Saturday, Nov. 13, from 1 to 2:30 p.m.  Sample will also entertain at the Caribou Performing Arts Center on Saturday at 7:30 p.m.

I was mentioning to our board of directors this past week that I got a quarterly report from a large online retailer who will donate a portion of my purchases to a charity I select.
Campaign Corner END_OF_DOCUMENT_TOKEN_TO_BE_REPLACED