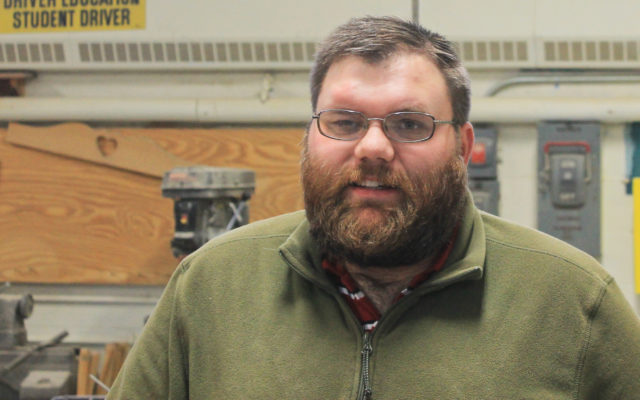 Anthony Brino • November 23, 2018
Don Hanson has been teaching industrial arts at Washburn High School for a decade, long enough that some of his former students are now having kids of their own and commissioning projects for their families.

Don Hanson has been teaching industrial arts at Washburn High School for a decade, long enough that some of his former students are now having kids of their own and commissioning projects for their families.

“Our students are active in the community and it teaches them that the work they do matters,” Hanson said. “No matter what I’m doing, I try to teach them that work is not a four-letter word. It’s something that is not going to hurt you to get sweaty.”

Hanson teaches multiple classes of woodworking, industrial arts, automotives and 3-D printing, as well as leading the after-school woodworking club that has worked on numerous projects around Washburn.

“The playground over at the Mill Pond Park was built by the club. The Rotary Club of Washburn bought the playset and my students and after-school club assembled it. At the Rec Center downtown, we redid some rooms with new ceilings and tiles. At the Salmon Brook Historical Society, we’ve done a few energy-efficiency projects.”

Hanson, 36, grew up in Presque Isle and lives there now with his wife and two kids.

His dad is a contractor and his mother a retired pre-K teacher who worked at Mapleton Elementary School, and his parents’ work influenced his own career path.

“I’ve basically taken both of those and melded them together. I still work with my father in the summer,” he said.

Hanson enrolled in the building and trades program at Presque Isle High School. He then took residential construction at Northern Maine Community College and later obtained a teaching degree in applied technical education at the University of Southern Maine. “I basically did two-plus-two before that was a thing,” he said.

Hanson’s classes and woodworking club cover a range of practical and technical skills that will be useful to both the general public and students pursuing trades or professions, such as engineering. Everyone should know how to do basic carpentry, he said, and all students should get to see what kinds of careers they can pursue in skilled trades.

The 3-D printer offers students an experience in computer-aided drafting and rapid prototyping. It’s something that can pique the interest of students who like computers, as well as students who want to work in engineering.

”Really, we’re trying to show them what they’d see in an engineering field,” Hanson said.

Current projects this fall include a storage shed being constructed outside of the high school, along with bandsaw boxes, an entry-level woodworking project that introduces first-year shop students to the bandsaw and some of the fundamental concepts in carpentry.

“These are all students who have never been around anything — no measurements, no anything,” Hanson said. “At the beginning of the year, before the harvest break, we basically spend all of our time on safety.”

Some students show up with some experience with tools or excitement about using them. Others have to develop the confidence to use them.

“A little bit of fear is good, because then you respect the tool,” Hanson said.

The woodworking club also offers students the opportunity to travel for both education and fun, as they take a group trip every year after putting in 100 hours of work through the club.

“We try to take an educational trip every year. Last year we went to Boston. The year before we went to Philadelphia,” he noted.

Hanson has taught at Washburn High School for 10 years. Prior to that he taught in Fort Fairfield and spent one year teaching at Presque Isle’s former Cunningham Middle School, where he attended middle school.

“All my memories of my middle school teachers, I got to turn around and teach with them. It was really a neat experience,” he said.

Hanson and his wife have a 6-year-old son and a 4-year-old daughter, and as parents they’re nurturing their children’s creativity and skills as well.