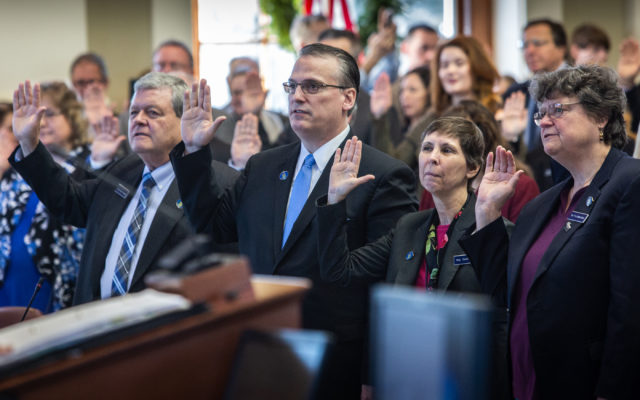 With LePage absent, Democrats take the reins of a new Maine Legislature

Alex Acquisto • December 5, 2018
As expected, the first actions that new members of the 129th Legislature took after being sworn in Wednesday morning were to elect Sen. Troy Jackson, D-Allagash, as Senate president and to keep Rep. Sara Gideon, D-Freeport, as House speaker.

As expected, the first actions that new members of the 129th Legislature took after being sworn in Wednesday morning were to elect Sen. Troy Jackson, D-Allagash, as Senate president and to keep Rep. Sara Gideon, D-Freeport, as House speaker.

In a break from tradition, outgoing Gov. Paul LePage didn’t perform the ceremonial swearing-in of new members because of a “medical challenge,” Maine Supreme Judicial Court Chief Justice Leigh Saufley told senators Wednesday morning as she prepared to administer the oath in his place. LePage has previously sworn in all three legislatures elected during his tenure as governor.

LePage’s spokeswoman, Julie Rabinowitz, did not respond to a request to explain the nature of the governor’s medical challenge.

Jackson’s election formalized the shift of power in the Senate from Republicans, who had held it for the past four years, to Democrats. In a speech after his unanimous election, Jackson, who succeeds two-term Senate President Mike Thibodeau, R-Winterport, spoke of uniting the state and the Legislature during a time of great division, which he said is “one of the greatest crises of our time.”

Jackson left the Senate to run for the Democratic nomination in Maine’s 2nd Congressional District in 2014. After losing that bid to former legislator Emily Cain, he won his way back to the Senate in 2016 and served as minority leader during the past two years. In that role, he usually took a much more congenial approach to dealings with LePage.

“Our goal here and now is to show people what government can and should be,” he said Wednesday.

Gideon, who begins her second term as House speaker, spoke similarly of working together to achieve the same goal. Her first term as speaker was marked by a state government shutdown in 2017, the first in 26 years, and often rancorous exchanges with LePage and House Republicans, who aligned staunchly with him.

“Remember that we often share the same goals, but with different ideas about how to achieve them,” she said. “And that even when our goals are different, that the other person’s perspective is rooted in something as equally important and real as yours.”

“We have so much that binds us together. Our foundation is so strong and the next chapter is waiting for us,” Gideon said. “Let’s take risks together. Let’s dare to be great.”

Democrats carry a majority in the House and Senate, 90-57 and 21-14, respectively, which means Republicans had a slim chance of placing one of their own in leadership positions today.

Democrats have nominated attorney Henry Beck, a former state representative from Waterville, for state treasurer. Independent Terry Hayes, who currently serves in the post and ran an unsuccessful bid for governor, was nominated by Republicans.

As the only nominee, put forth by Democrats, Matt Dunlap is likely to continue in his role as secretary of state. Republicans have indicated that they would not nominate anyone to challenge Dunlap.

Maine is the only state where the Legislature elects its constitutional officers. 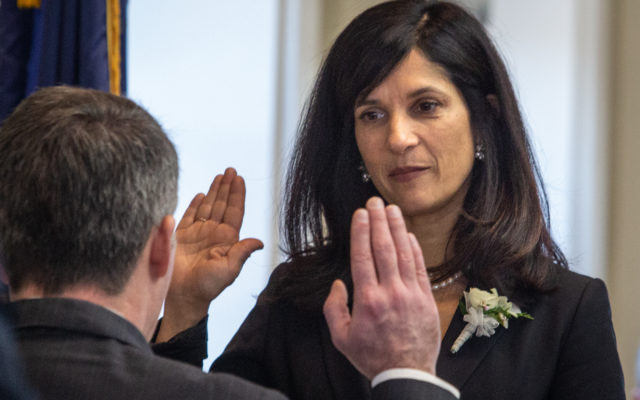 Only one member of Maine’s congressional delegation had come out in favor of impeaching President Donald Trump ahead of House Speaker Nancy Pelosi’s Tuesday announcement that the Democratic-led House of Representatives would begin an impeachment inquiry.
Pets END_OF_DOCUMENT_TOKEN_TO_BE_REPLACED

Last week, we received a phone call about a cat that was in desperate need of help. The young lady said she found a cat that was very skinny and crying and that there was blood in the snow.
Campaign Corner END_OF_DOCUMENT_TOKEN_TO_BE_REPLACED