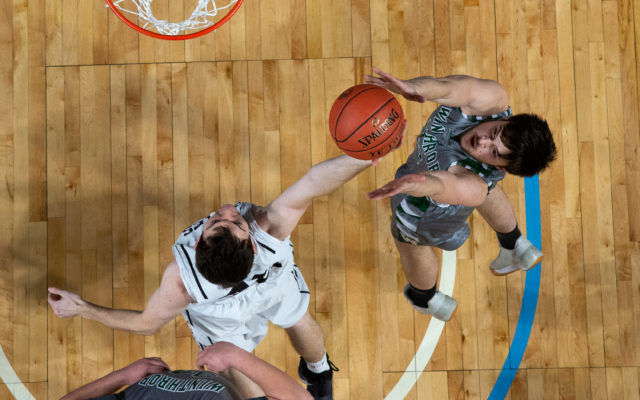 At first glance, it appeared as though Winthrop might be able to impose its will on Houlton in Saturday night’s Class C boys basketball state championship game.

The Ramblers owned a sizeable height advantage, featured more experience and backed that up with considerable depth. Those qualities won out, but not before the Shiretowners gave them everything they could handle. 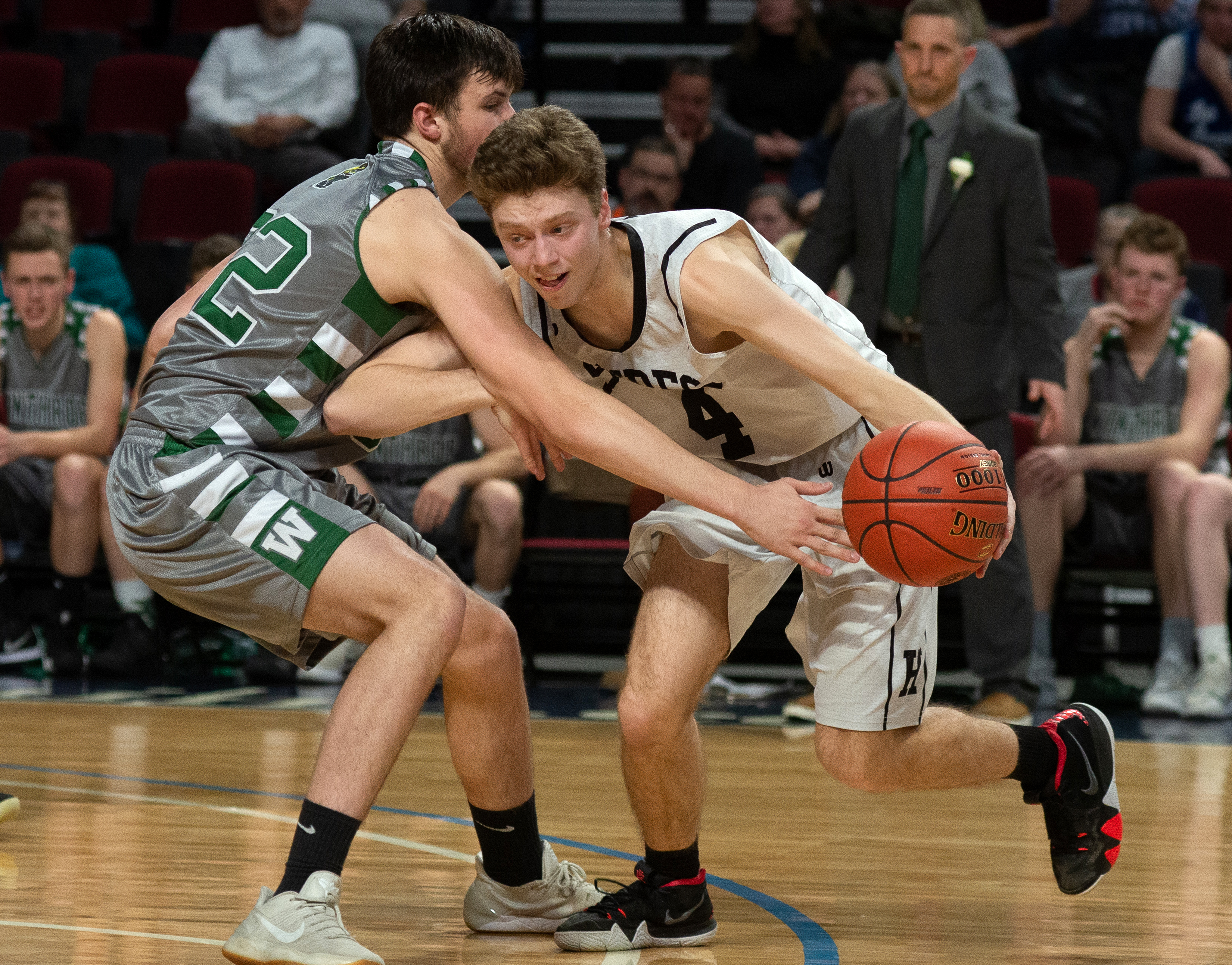 It was the 15th consecutive win for coach Todd MacArthur’s Ramblers (21-1), who claimed the program’s fourth state championship.

“I’ve been playing with this group of [senior] guys since like third grade. This is what we dreamt about,” said 6-foot-8 senior Cam Wood, who paced Winthrop with 16 points, 11 rebounds and three blocked shots..

Houlton wound up 17-5 while playing in its first state title game since 2014.

It was a special night for the Ramblers’ seniors, some of whom endured the excruciating 47-44 last-second loss to George Stevens Academy in the 2017 championship game in the same building.

“That’s what really fueled me about this place,” Wood said. “I wanted to come in here and redeem myself. I wanted to get the win.”

This time, Winthrop’s seniors refused to let it slip away. The quartet of Leblanc, Wood, Sam Figueroa and Jared McLaughlin combined for 15 fourth-quarter points to finally shake off a determined Houlton squad.

Coach Tim Brewer’s Shiretowners made the Ramblers work to get the ball down low consistently, using cohesive man-to-man defense to slow Wood and the 6-5 Figueroa. Junior Cam Callnan, despite giving away several inches, drew the assignment of trying to contain Wood.

“I thought my kids had a valiant effort,” Brewer said.

But as the game wore on, the physical toll of trying to match Winthrop’s size and depth seemed to finally catch up to Houlton.

“We got beat up on the glass a little bit and we missed a few foul shots and we still [were] in the game,” Brewer said. “I don’t know what more I could have asked of my kids. They battled all night.” 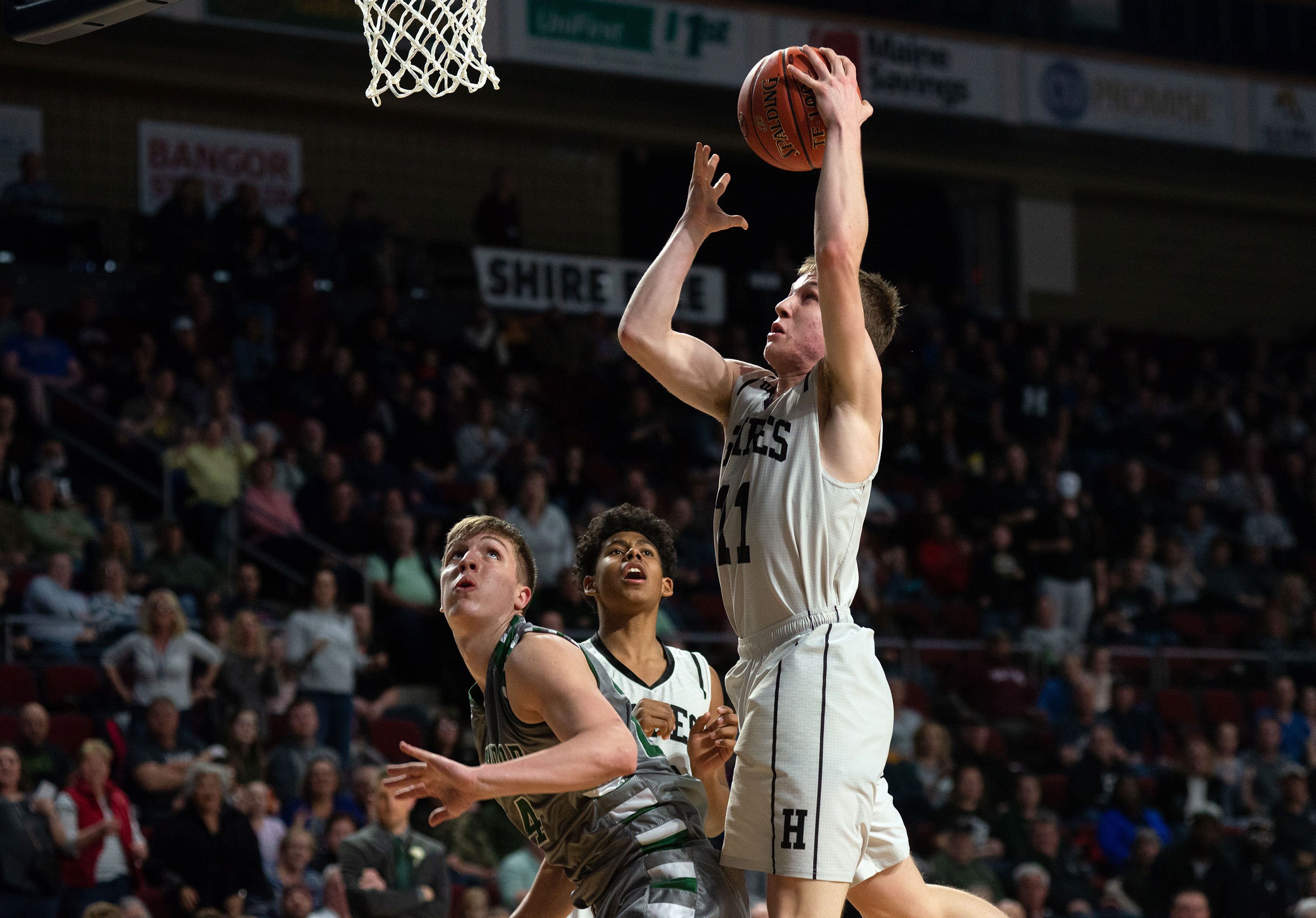 Houlton’s Keegan Gentle goes up for a shot in the first half of the boys Class C state championship game at the Cross Insurance Center in Bangor on Saturday.
Linda Coan O’Kresik | BDN

Eight different players scored for the Ramblers, who shot 48 percent from the field and outrebounded the Shires 39-26.

“We’re very deep. We can attack you in a variety of ways,” MacArthur said of his team’s balance and versatility.

The Shires went 18-for-52 (35 percent) from the floor while trying to attack and get into the paint as often as possible.

“They’re a physical team that works their tails off and they’re tough,” MacArthur said of Houlton.

“They really took us out of what we wanted to do early on,” he added.

It was still a two-point game after Brewer scored on an offensive rebound to cut Winthrop’s lead to 43-41. But after a timeout, the Ramblers started to click.

Leblanc opened a key stretch with a 3-pointer from up top, then Hachey drained a 3 from the right wing with 3:16 left to make it 49-41. Brewer countered with a steal and a basket for Houlton, but Wood scored underneath off his own miss and McLaughlin hit a 10-footer to give Winthrop a 53-43 advantage with only 1:47 to play.

“We adjusted and we got the defense moving and we were able to take advantage in the third [quarter] and pull away in the fourth,” MacArthur said of Winthrop’s ability to get better looks at the basket in the second half.

The Ramblers put the game out of reach from the foul line.

“We lacked some size, but they’re a good team and they really shot the ball well in the second half,” Keegan Gentle said.

The Shiretowners rode their gritty defense to a 24-20 halftime lead, making Winthrop work for its inside points and contesting perimeter shots. Winthrop outrebounded Houlton 20-10 in the half.

Houlton worked the ball patiently against the Ramblers’ man-to-man defense and was able to attack the basket off the dribble and find some shooting room outside.

Houlton received a boost off the bench from Solomon, who sandwiched 3-pointers 38 seconds apart around a close-range bucket by Winthrop’s Wood to help the Shires grab a 24-18 late in the half.

However, the Ramblers re-established an inside-out approach early in the second half, which helped them get into sync and regain the lead for good.

June is generally a month that also marks the height of “kitten season,” when large litters of kittens are born and often end up in animal shelters.   Luckily, here at the Central Aroostook Humane Society, we have seen a dramatic drop in the cat population over the past five years, mostly due to our spay and neuter program.
What's Happening This Week END_OF_DOCUMENT_TOKEN_TO_BE_REPLACED