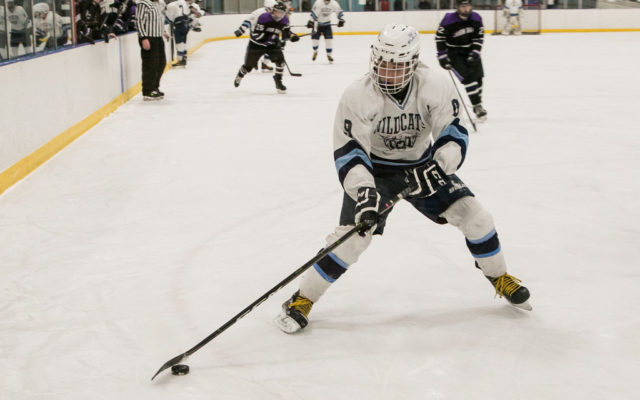 Kevin Sjoberg • March 4, 2019
The Presque Isle hockey team displayed plenty of resiliency in its semifinal match against Kennebec, scoring twice in the final 8 minutes and 18 seconds of regulation to force overtime.

The Presque Isle hockey team displayed plenty of resiliency in its semifinal match against Kennebec, scoring twice in the final 8 minutes and 18 seconds of regulation to force overtime.

But the Wildcats were unable to sustain that momentum in overtime as Zach Menoudarakos netted the game-winner on a power play nearly midway through the eight-minute extra session, giving the Riverhawks a 6-5 victory and a berth in the Class B North championship match.

The match was played Saturday at Colby College in Waterville.

Presque Isle finished its season with a 16-4 overall record, while No. 2 seed Kennebec (15-4) now gets to take on top-ranked Old Town-Orono at Alfond Arena on the University of Maine at Orono campus Wednesday.

The Wildcats trailed 5-3 before senior Thomas Patenaude delivered unanswered goals 7:13 apart. The tying goal, which came with just 1:06 to play in the third period, gave Patenaude 100 points for his career.

He became only the 12th PI player ever to reach the mark. Linemate and fellow senior Jake Stevens hit the milestone during the Feb. 18 regular season game against Brewer.

Patenaude’s one-timer from the bottom of the right circle came on the power play, with the Wildcats also pulling goalkeeper Andre Daigle to create a 5-on-3 advantage.

“I’m so proud of the way our team played,” said Wildcat coach Carl Flynn. “To come back from a two-goal deficit and tie the game was special. Even more special was that Tom got the 100th point of his high school career on that play.”

Patenaude was called for a controversial penalty on a 1-on-1 collision with Kennebec goaltender Ben Grenier early in overtime, resulting in the man advantage for the Riverhawks. Menoudarakos then connected on a slap shot from the left point through traffic which got past Daigle for the sudden-death goal.

“As for the overtime penalty, it was a 50-50 play and I’ve been contacted by several officials that were at the venue who told me in their opinion it was not a penalty,” Flynn said. “Unfortunately, that’s the way things go sometimes.

“I do think that we had the best team and the potential to go to the state game,” he added.

Patenaude ended up with three goals and sophomore Gage LeTourneau had the other two for the Wildcats.

Presque Isle and Kennebec had split their two regular season meetings, with Kennebec winning at the Forum, 8-5, on Dec. 28, and the Wildcats battling to a 4-1 win at Colby College on Feb. 5.

The Wildcats had reached the finals last winter, falling to Old Town-Orono, 9-1.

I was mentioning to our board of directors this past week that I got a quarterly report from a large online retailer who will donate a portion of my purchases to a charity I select.
Campaign Corner END_OF_DOCUMENT_TOKEN_TO_BE_REPLACED