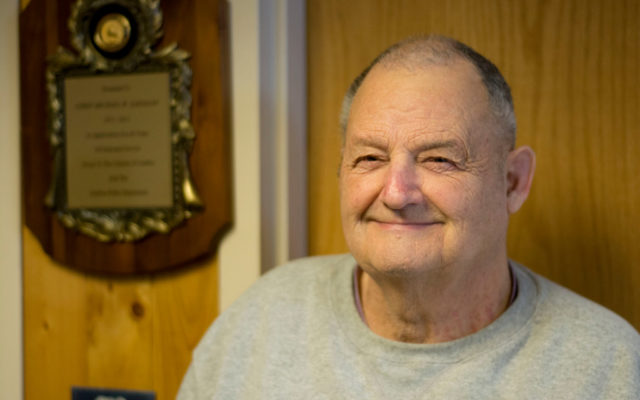 Chris Bouchard • March 7, 2019
William Gahagan, 74, of Caribou has worked for the local police department since 1968 and doesn’t plan on stopping anytime soon.

CARIBOU, Maine — William Gahagan, 74, of Caribou has worked for the local police department since 1968 and doesn’t plan on stopping anytime soon.

Gahagan was born in “1944, during the war,” and while he likes to be called William, most at the police station affectionately refer to him as “Billy.”

In addition to spending decades at the station, located in the lower floor of Caribou City Hall, Gahagan was literally born in the building.

Law enforcement runs in the Gahagan family. Arnie Gahagan, the eldest sibling, works at the district attorney’s office as a victim advocate, and Danny Gahagan just retired after 30 years with U.S. Customs and Border Protection. Their sister is married to the Limestone fire chief. Arnold Gahagan, their father, was Caribou’s first full-time fireman and served the city for 44 years.

Billy began his work with the department after successfully completing a training course in Bangor, which would allow him to work as a custodian. Michael and some other officers helped Billy, who is unable to read, study and take his tests verbally.

He said when he started working in the late 1960s, his duties involved “emptying the garbage cans, making coffee, and talking to the ladies.”

“That’s a very important part of the job,” said Laura Adams, administrative assistant for the Caribou PD. “Billy is famous for telling everyone what a good job they’re doing, whether or not that’s true, and for telling all the ladies how good they look.”

“He’s our sunshine boy,” said Chief Gahagan. “No matter how bad things are going, we always have his encouragement. He’ll always tell us how good we’re doing.”

William worked through six city managers and, like all of his siblings, served as a volunteer firefighter.

“I’d fight fires all night,” he said, reminiscing about his time with the fire department from 1968 well into the 1980s.

He also taught the local youth how to slide down the firepole, his favorite part of the building.

“How many times did you slide down the firepole?” Adams asked him.

“No,” the chief laughed. “It was thousands of times. We all did it.”

He also held various side jobs throughout the years, while still working at the police station in the mornings, including working for his father at a local landfill.

“Our father had a contract for a landfill on the Ogden Road,’ said Chief Gahagan. “Billy worked with him out there for four or five years, helping to push back garbage.”

“It was a lot of fun,” said Billy. “I learned how to use a bulldozer, and I’d say ‘If you get me stuck, you’re getting this baby out.”

He didn’t get his license for 30 years, and when he finally did, it was a motorcycle license. Shortly afterward, he obtained his driver’s license. Before that, he would ride his bicycle to work, a four-mile trip.

Some of his favorite activities include visiting Jade Palace for lunch with his friends at the department, watching war movies, listening to bands like AC/DC, and staying at his family’s camp on Cross Lake. He particularly enjoys Caribou’s “Thursdays on Sweden” street festival, where he serves soda to guests.

He intends to remain at the police station.

“I’ll kick the bucket right here,” he said. “They’ll have to roll me down the hill and put me in the Aroostook River.”

“I always tell Billy he can never retire,” said Adams, “because then I’ll never know how good I look or how good I’m doing.”

While Billy’s family acted as his caretakers for most of his life, he started living on his own after their parents passed away.

“He’s done real well for himself,” said the chief. “We keep an eye on him, and he knows pretty much everyone in town.”

They joked that it’s nearly impossible for Billy to “get into any trouble” since everyone in town knows him.

““They say it takes a village to raise a child,” the chief said. “Well, our village raised Billy.”

A familiar face to Aroostook County residents has announced her candidacy for the Maine State Senate.
Pets END_OF_DOCUMENT_TOKEN_TO_BE_REPLACED

When 14-year-old Isaiah Belyea of Caribou began volunteering for Halfway Home Pet Rescue three years ago, he never imagined that his love for animals would quickly turn into a budding career.
What's Happening This Week END_OF_DOCUMENT_TOKEN_TO_BE_REPLACED