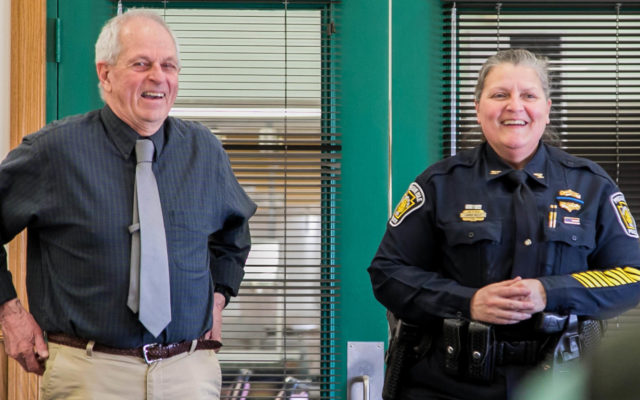 Contributed • May 9, 2019
The Probus Club of Aroostook held their regular monthly meeting on April l9, 2019, in the Reed Commons Building at Northern Maine Community College.

Dave Maxey, president, introduced the guest speaker, Presque Isle Police Chief Laurie Kelley, who has been on the force for 33 years.

Kelley served in the U.S. Army before joining the police department. She trained for 10 months as an interrogator while in Fort Dix, N.J., as well as Arizona and California. She learned to speak Russian, and interrogated Russian defectors from their country while stationed in Germany. She served in the Army for over four years before returning to Presque Isle.

She received 29 weeks of intensive training at the Maine Criminal Justice Academy as a prerequisite to joining the PIPD. Kelley said she enjoys her position. There are constant changes in the laws as well as her daily shifts, which makes her job exciting and everything but routine.

Drugs are a major problem throughout our community area. Recent surveys showed that heroin and methamphetamine are the prevalent drugs of choice at this time. Code enforcement laws allow checks on local buildings that are being used by drug dealers and drug abusers. The time-consuming process of obtaining search warrants can make apprehensions difficult at times.

Kelly said many “drug houses” become “flop” houses as places for the homeless, as well as those with mental illness and addictions. Cooperation from landlords becomes helpful in halting drug activities. It requires a great deal of collaboration on the part of several departments in order to curtail drug abusers and drug dealers in the city.

She also spoke on rehabilitation programs in the area and some legal issues concerning marijuana, and added that Department of Health and Human Services calls also form a large part of local police duties.

The club will award a $500 scholarship to a worthy NMCC student wishing to apply before May 15.

New members are always welcome. Those interested may attend any monthly meetings, the next of which will take place at 10 a.m. on Thursday, May 16, at Reed Commons.

Only one member of Maine’s congressional delegation had come out in favor of impeaching President Donald Trump ahead of House Speaker Nancy Pelosi’s Tuesday announcement that the Democratic-led House of Representatives would begin an impeachment inquiry.
Pets END_OF_DOCUMENT_TOKEN_TO_BE_REPLACED

We think a cat can make for the best pet in the world. To truly love a cat, you must learn to accept them for what they are -- unpredictable and quirky, which is something unique and unlike any other pet.
Campaign Corner END_OF_DOCUMENT_TOKEN_TO_BE_REPLACED