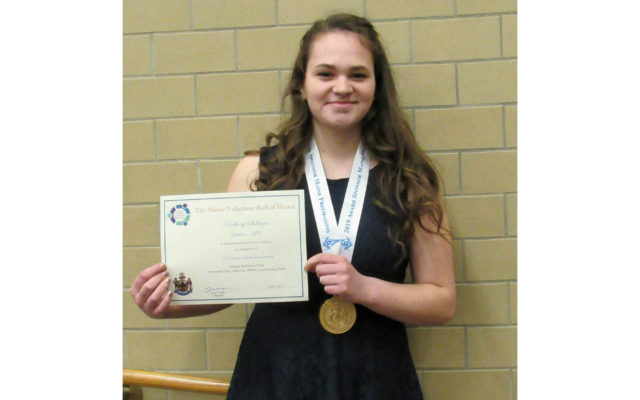 Contributed • May 10, 2019
Rothery Sullivan of Littleton was recognized recently at the 2019 Governor's Awards for Service and Volunteerism for her dedication to community service.

LITTLETON, Maine — Rothery Sullivan of Littleton was recognized recently at the 2019 Governor’s Awards for Service and Volunteerism for her dedication to community service.

Since 1987, the Governor’s Awards for Service and Volunteerism have celebrated and recognized the role of citizen volunteers in the success and vitality of Maine communities. At the same time, the awards seek to inspire others to be active in civic life and follow in the footsteps of those recognized.

To qualify for the award, adults must have logged a minimum of 500 verifiable hours of service in 2018. Students aged 18 and under are recognized for at least 50 hours of service.

This year’s ceremony was held April 14 at the J. Duke Albanese Performing Arts Center at Messalonskee High School in Oakland. In addition to the presentation of a certificate and medal to each participant, the event featured performances by three a cappella groups from Colby College.

Sullivan is a senior at the Maine School of Science and Mathematics in Limestone. In addition to her rigorous academic curriculum and extra-curricular involvement, Sullivan is a three-season athlete, participating in cross country, Nordic skiing, volleyball, and track-and-field; is a member of the MSSM Jazz Band and Math Team; is president and founder of the Media Club, which publishes a school newspaper; is president of both the Literary Magazine and French Club; is an active member of Key Club, Civil Rights Team, Gainz Club and Cooking Club; and serves as a residential assistant for her dorm wing, where she managed to log 112 hours of community service last year.

As a member of Key Club, Sullivan spearheaded a Linus Project initiative, raising funds to purchase fabric and organizing a group effort to make blankets, which were donated to pediatric patients in local hospitals. Sullivan organized another Linus Project effort earlier this year.

As president of the MSSM Literary magazine, she initiated and led a literacy project, purchasing and collecting books, with a goal of providing at least one book to every elementary and middle school student in Limestone. She also served as a senior volunteer staff and committee member for the Aroostook Teen Leadership Camp and she volunteered her time on a weekly basis as a Math and English tutor at MSSM.

She is the daughter of Frank and Meryl Sullivan. After graduating from MSSM in May, she plans to pursue a degree in English Literature and film studies at the University of Glasgow in Scotland.

For all it does to refresh us, burn energy and keep us sharp, we all need playtime, dogs and cats included. Sharing playtime with pets has the added benefit of strengthening the bond between us, so we better understand one another.
Campaign Corner END_OF_DOCUMENT_TOKEN_TO_BE_REPLACED