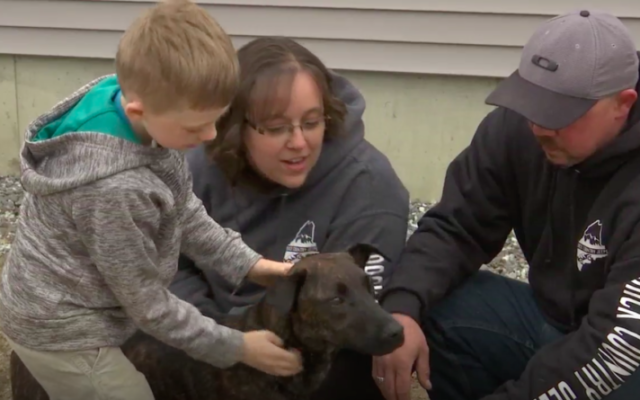 By CBS 13, Special to The County • May 14, 2019
A family’s dog went missing deep in the woods for nearly three weeks and was rescued by a K-9 tracking team.

BOWDOIN, Maine — A family’s dog went missing deep in the woods for nearly three weeks and was rescued by a K-9 tracking team.

CBS 13 | BDN
Lisa Nazarenko of K-9 Tracking
After 18 days lost in the woods, the Waltz family is overjoyed at the return of new rescue, Sam. The dog became lost after chasing his brother into the woods.
Start Legacy Planning

See More
“Sam decided to take off and Bentley went with him. About 45 minutes later Bentley came back but Sam didn’t. I mean we’ve only had him for two months and the thought of him being out there in the wild, again, because he was a stray is just awful,” Sam’s owner, Michael Waltz said.

They decided to contact K-9 Tracking, one of New England’s only tracking teams.

Nazarenko was inspired to create her own team after one of her dogs went missing about a decade ago.

She now has a team of ten dogs’s that have helped locate more than 100 animals.

[A dog went missing in Massachusetts 8 months ago. Then he showed up 175 miles away in Maine]

“Its one-million percent rewarding to find someone’s child, we’ll say. And to hand them back is unfathomable,” Nazarenko said.

The Waltz family said faith was running low as days continued to go by.

“Before we met Lisa I thought he was never coming home. But then I met Lisa and we gained hope. But Lisa always kept us on the right page. We found dog tracks. Day by day it was different,” Tiffany Waltz said.

After 13 days of searching, the dog was spotted and hope was restored. The next step was to trap Sam.

[Missing Maine cat crashed a wedding, went to college and broke hearts during a year away from home]

“This dog wasn’t going to come up to anybody. We didn’t even know if it was going to come up to its own family members. They didn’t have it long enough. Even though they have developed a rapport but being in the woods for 13 day, it may not see the humans as family.” Nazarenko said.

Five days after the initial spotting, Sam was rescued again.

“They removed like 45 porcupine quills out of his mouth and throat. We have probably removed about a hundred ticks off of him,” Tiffany said.

Sam is now safe at home and building back his strength.

Members of the Houlton Band of Maliseets will head to the ballot box in order to determine who will be elected as their new tribal chief.
Pets END_OF_DOCUMENT_TOKEN_TO_BE_REPLACED
7 days ago