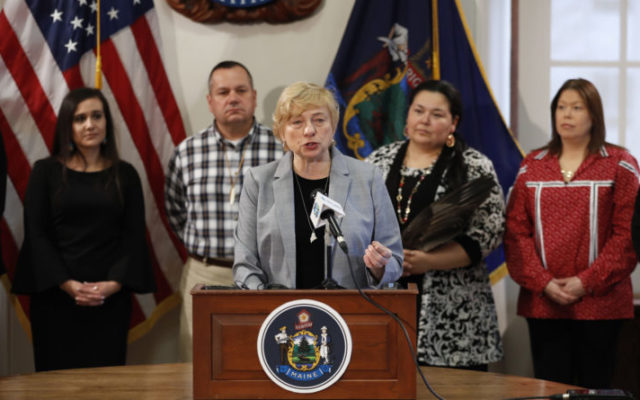 Alex Acquisto • May 17, 2019
Gov. Janet Mills on Thursday signed into law a controversial bill banning the use of Native American mascots in all state public schools.

Gov. Janet Mills on Thursday signed into law a controversial bill banning the use of Native American mascots in all state public schools.

When the bill takes effect later this year, Maine will become the first U.S. state with such a ban.

Surrounded by members of Maine’s tribal communities Thursday afternoon, roughly two months after the Skowhegan school board voted to end its use of the state’s last remaining “Indians” nickname at its local high school, the Democratic governor signed the bill barring any public school or university from using Native American mascots, names and imagery.

After hours of inflamed debate earlier in the session, the Legislature voted last month largely along party lines to support the proposal from Rep. Benjamin Collings, D-Portland. The bill, though it applies statewide, was aimed at Skowhegan, where residents have argued for years about whether to keep or get rid of its Native American mascot and nickname. The school board’s March decision would not prevent the district from holding a non-binding referendum to restore both, though that’s no longer possible under the new law.

This Little Drone Is Flying off Shelves! The Price Will Shock You

Mills on Thursday said, “While Indian mascots were often originally chosen to recognize and honor a school’s unique connection to Native American communities in Maine, we have heard clearly and unequivocally from Maine tribes that they are a source of pain and anguish.”

“A mascot is a symbol of pride, but it is not the source of pride,” Mills said. “Our people, communities and understanding and respect for one another are Maine’s source of pride, and it is time our symbols reflect that.”

Rena Newell, a non-voting tribal representative for the Passamaquoddy Tribe from Pleasant Point, said Mills’ historic gesture signified the “start of a higher trust of promoting cultural diversity and awareness.”

“Today and [from] now on, it is our collective responsibility to the next generations to promote each other as equals, as individuals, and most importantly, as neighbors,” Newell said.

Earlier this year, Mills signed a bill to replace Columbus Day with Indigenous Peoples Day.
As attorney general, Mills received criticism from two tribes — the Penobscot Nation and Passamaquoddy Tribe — for her role in a legal fight over tribal water rights. However, since becoming governor, she has moved to improve state government’s relationship with the tribes, which had become increasingly strained during two previous administrations.

It was a freezing day across The County, but you could hardly tell from the turnout. Even after a massive surge in absentee ballot requests across the Central Aroostook area, droves of people came out to vote in Presque Isle, Mapleton, Washburn and Fort Fairfield.
Pets END_OF_DOCUMENT_TOKEN_TO_BE_REPLACED