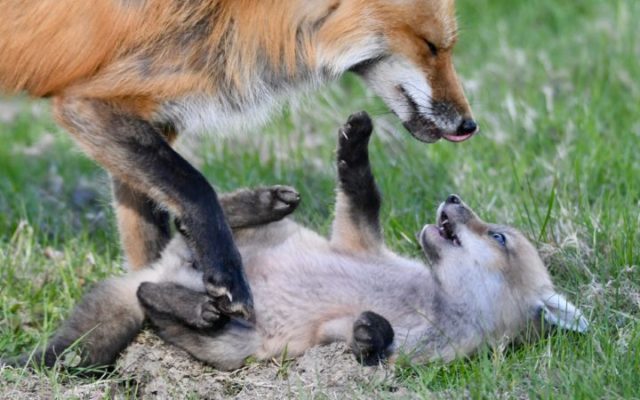 John Holyoke • May 17, 2019
Despite the annoying song that made the rounds a few years back, we may never know exactly what the fox says, but thanks to nature photographer Roger Stevens Jr. we’ve now got a lot better idea of what a pack of fox kits do when they’re hanging out with their mother.

Despite the annoying song that made the rounds a few years back, we may never know exactly what the fox says, but thanks to nature photographer Roger Stevens Jr. we’ve now got a lot better idea of what a pack of fox kits do when they’re hanging out with their mother.

You may remember Stevens, the owner of Maine Focus Photography in Lincoln, as the guy who captured the cool shots of a squirrel’s treetop showdown with a bald eagle, which the BDN featured in March.

Stevens has also published several photo books focusing on a variety of critters he’s found around the state.

I’ve been a fan of his work for years, and have written about many of his projects. Earlier this week, I got an email offer from Stevens that I knew I couldn’t turn down: “Interested in another story?”

You bet I am. And since you’ve already seen the photos or the video (or both), I’m sure you understand why.
Courtesy of Roger Stevens Jr.
A fox kit plays with its mother in Lincoln.
About a week ago, Stevens said a man let him know about a family of foxes that were living underneath someone’s porch not far from downtown Lincoln. Armed with a new camera, he headed over to visit, and found that the foxes were far from shy: The mother fox has five active kits, which scamper, play, wrestle and essentially exude extreme cuteness that he was more than happy to capture in photos.

Stevens published a book five years ago that featured foxes, but while photographing that fox family, he was at a property that had no human residents at the time. The new site — about three-quarters of a mile away from that first one — does. And the family that lives there has learned to live with its wild neighbors, which often take up positions right next to the front door.

“I talked to the lady [who lives there],” Stevens said. “She said, ‘We’ve just learned to coexist with them. If they’re on the porch and we’re in our car, we just wait until they get off [before heading inside]. If we’re in the house and we need to leave, we knock on the door [to let the foxes know we’re coming out].”

The system seems to work.

“They don’t care [about the presence of] people,” Stevens said. “They sit on the front porch and watch people go by on bicycles, and people with carriages walk their babies. I’ve never seen anything like it.”

That apparent comfort around humans also worries Stevens, who often takes photos from the other side of the street.

“They’re getting older now and they’re so curious, I’m so afraid they’re going to get in the road,” Stevens said. “They can’t be more than 10, 15 feet from the road [most of the time].”

Fox kits found hanging out in Lincoln neighborhood
Stevens has taken photos of the kits interacting with their mother, playing with each other, and play-fighting with their mom. While Stevens said he has seen other fox families with two parents caring for kits, this mother fox is the lone care provider for this litter. She’s busy, to say the least.

“Her mate might have got hit or killed or something. I don’t know. She’s shouldering the whole load, having to give them milk and find animals for them [to eat], and feed ’em. And she’s so attentive,” Steven said. “She takes each one of those kits, by itself, and gives it a bath, makes sure it’s had food. She does this for every one of them. I don’t know how she knows and keeps them straight, but she does.”

Stevens said he thinks the kits are about 6 weeks old, and he’s hoping that they soon move away from the road to another den that he assumes the mother fox has prepared in the woods behind the house. The mother fox appears to be planning for that transition, Stevens said, by coaxing the kits farther and farther from the road to receive the food she brings them.
Courtesy of Roger Stevens Jr.
Fox kits cuddle with their mother.

After years photographing wild animals, Stevens realizes how lucky he is for this opportunity.

“I’ve never had the good fortune to be around foxes in this kind of proximity,” he said. “Because of the fact that they’re not that upset about people, I’ve been able to get some incredible pictures.”

And you can expect to see the photos in another future publication.

In the meantime, Stevens said he’d welcome readers to visit his Facebook page, where you can find all kinds of other great photos.

John Holyoke can be reached at jholyoke@bangordailynews.com or 207-990-8214. Follow him on Twitter: @JohnHolyoke. His first book, “Evergreens,” will be released by Islandport Press in October.