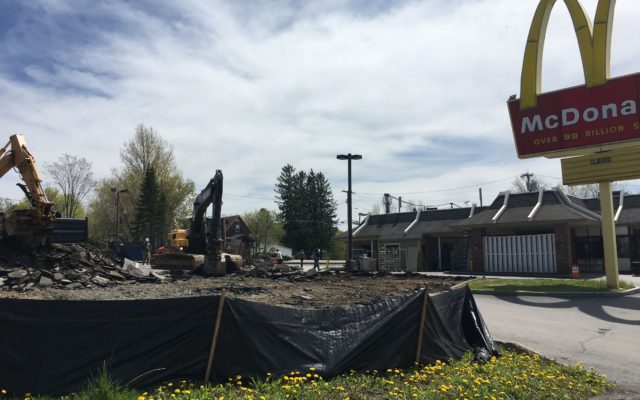 Nina Mahaleris • May 23, 2019
The McDonald’s restaurant on Main Street in Presque Isle will close for the summer months as construction for the restaurant’s rebuild begins.

PRESQUE ISLE, Maine — The McDonald’s restaurant on Main Street in Presque Isle will close for the summer months as construction for the restaurant’s rebuild begins.

The restaurant will officially close around 9 p.m. on Sunday, May 26, according to owners Heidi and Daryl Abbotoni.

As it stands, the building needs to “modernize,” said the Abbotonis. The plan is to demolish the current building on Tuesday, and construction of the new building is expected to take about 90 days.

Some of McDonald’s current employees will collect unemployment, said Heidi Abbotoni, while others will be relocated to the couple’s five other McDonald’s locations in The County.

The Abbotoni’s other restaurants in Caribou, Lincoln, Houlton and Calais have all undergone reconstruction in the past, as the couple attempts to keep up with modern building designs.

Heidi Abbotoni said the rebuild will alleviate some of the structural problems of the current building, including a roof leak and traffic complications. Due to the proximity of the restaurant to Main Street, drive-thru customers sometimes end up parked on the road, backing up traffic, she said.

The new building will feature a larger playhouse for children as well as a double drive-thru. It will also provide greater seating for customers, with 30 more seats. Teresa Begin, who supervises all five of the Abbotonis’ restaurants, said that the improvements “will be more convenient for our customers.”

In addition, the McDonald’s corporation purchased a house behind the building, which also will be demolished to accommodate the new double drive-thru, the Abbotoni’s said.

In the meantime, Presque Isle customers can visit the restaurant in Caribou or Houlton until the building is completed.

Halfway Home Pet Rescue in Caribou has partnered with the Houlton Humane Society shelter for a cat spay and neuter clinic on Saturday, May 30, and Sunday, May 31, in Houlton.
Campaign Corner END_OF_DOCUMENT_TOKEN_TO_BE_REPLACED