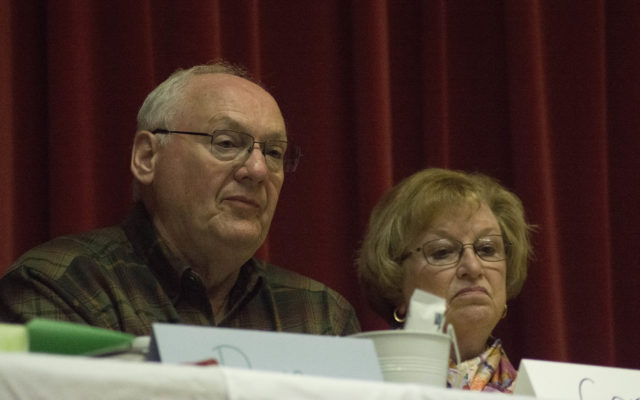 Chris Bouchard • June 2, 2019
A panel of cancer survivors and caretakers shared their experiences with Caribou Middle School students during an event held Wednesday that was centered around the idea of resilience.

CARIBOU, Maine –– A panel of cancer survivors and caretakers shared their experiences with Caribou Middle School students during an event held Wednesday that was centered around the idea of resilience.

Seventh- and eighth-grade English Language Arts instructor Kim Barnes, who recently was named 2019 Aroostook County Teacher of the Year, introduced the panel to her students at the Caribou Performing Arts Center. 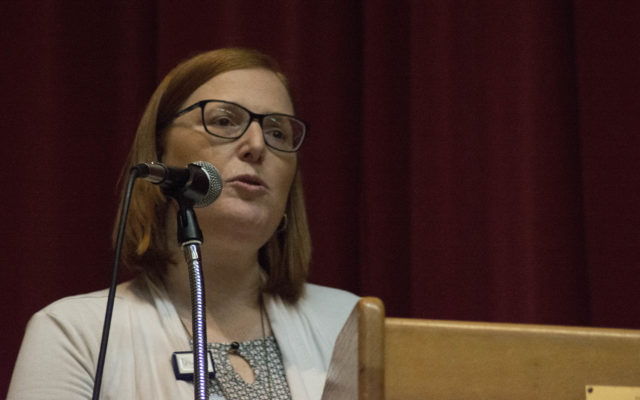 Betheny Zell of Cary Medical Center hosts May 29 panel on resiliency in which she asks questions written by Caribou Middle School students to cancer patients, survivors, and caretakers about their experiences. (Chris Bouchard)

“We’ve been doing a lot of work in class talking about the idea of resilience,” Barnes said, “and now you really get to put a face to the concept.”

The panel itself was led by Bethany Zell, who works with Cary Medical Center in Caribou and is also the program director of Pink Aroostook, a breast cancer health program that covers all of Aroostook County. Zell also does breast cancer advocacy work with Maine Breast Cancer Coalition and National Breast Cancer Coalition in addition to American Cancer Society’s Cancer Action Network.

“I’m out and about in the community advocating for different things that will help cancer patients and those living with or at risk for cancer be more comfortable getting access to life-saving treatments,” she said.

Zell commended the work of Barnes’ students, saying they “came out with some amazing questions,” and proceeded to ask about 10 of their questions, which members of the panel could choose to answer.

In response to the question of whether “you lost your job or had it in jeopardy” as a result of a cancer diagnosis, panelist Dave Corriveau said he was fortunate to own his own business and be his own boss. He said the experience made him “very irritable” and “short” when dealing with “ignorant things people would do or say.”

“I had a tendency to shoot my mouth off in the wrong direction,” he said, “and I was blessed to have my wife, who was my primary caregiver, say ‘Honey, stay home.’ So I did.”

Staying home helped tremendously when Corriveau had to undergo “heavy duty chemo,” which he said was often referred to as a “cocktail.”

“It literally wipes you right out,” he said. “It puts you on the boundary of death.”

Ultimately, he said he was fortunate for his wife as a caretaker, as “staying home was the best thing I could do.”

Cancer survivors Chuck Kelley and Karin Howe discussed one piece of advice that someone gave them which helped during their battle with cancer.

Kelley said that when he received surgery for colon cancer, the results were positive enough that he considered not undergoing chemotherapy, as his oncologist informed him there was an 89 percent chance that the cancer would not return.

“I said ‘Those are pretty good odds. Maybe I won’t do the chemo,’” he recalled, “but when I went back to talk to my surgeon, he told me there may be a time where, if this cancer does come back, I might ask myself if I did everything I could’ve done to prevent it from coming back.” 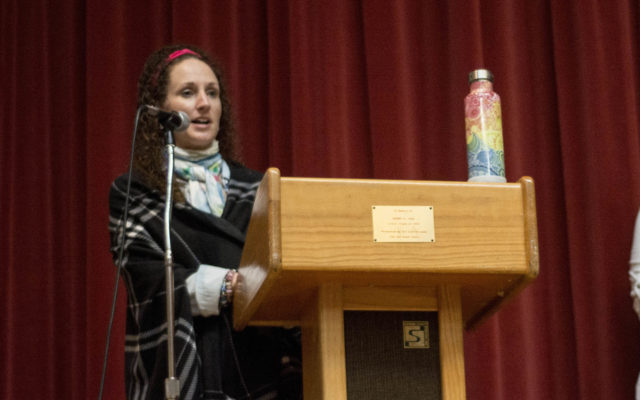 The doctor told him that as long as he could live with this possibility, then he could forego the chemotherapy.

“And so I ended up doing it because of what he said,” Kelley said. “I thought that was very good advice. He didn’t tell me I had to do it, but I think it was his way of making sure that I followed through with our original plan.”

Howe said her advice came from her husband on the way to her final check-up after being clear of cancer for five years.

“And so I did,” Howe concluded.

In response to the question of whether the experience made any survivors want to give up, Londa Brown told the story of her diagnosis of triple-negative breast cancer.

Brown said she discovered a lump while her husband was in the hospital for a very serious operation, and initially met with a surgeon who told her she would just need a simple lumpectomy, not a total mastectomy.

“We talked through the options and everything looked great,” Brown said. “A week later — it was the night before Thanksgiving in 2013 — I got a phone call and the surgeon said, ‘It’s bad. It’s very, very bad.’ Well, that is not something you should ever say to a patient, and it was a horrible experience. She explained to me that I had triple-negative breast cancer, which has no known treatment.”

She said that while she initially felt hopeless, she met with an oncologist and his team and “started on the journey,” which slowly reinforced her sense of hope.

“You have to have hope,” she said, “and you have to look ahead, and you have to take it one minute at a time, which so many people here have expressed. There’s no other choice.”

Zell, in wrapping up the panel, explained that through her experiences as a caregiver she’s found that each interaction contains a moment in which someone can choose to either help or hurt someone.

“Every one of us has a story that’s unique,” she said, “and we all face our own hurdles. So in every moment, be the person who’s going to help, not hurt. And that’s the true sign of strength and resilience, being able to help in those moments of pain and turmoil that we and others may be facing.”

At the Houlton Humane Society, we take adopting the cats and dogs in our charge very seriously.
Campaign Corner END_OF_DOCUMENT_TOKEN_TO_BE_REPLACED